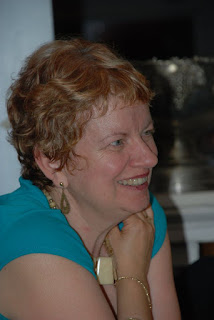 This is me, your Grammar Grandma, Mary Hoffman. I want to explain my qualifications for the job.


Grammar
I was taught "traditional English Grammar" at a UK Independent Girls' School. That doesn't mean I was an independent girl - although I was. I was a scholarship girl with a good brain and a thirst for knowledge, especially about literature and language, which I soaked up like a sponge. I actually enjoyed grammar lessons.

My A levels were in English Literature, Latin, Classical Greek, Art and, much later, Italian

After an English Literature degree at Cambridge I spent two years as a PostGrad at University College, London, and took a diploma in General Linguistics, which I adored.

In the 1970s I was one of the authors and teachers on the Open University Diploma on the Teaching of Reading. For 18 years I was Reading Consultant to the Schools TV series, Look and Read, acting as script editor, writing teachers' notes and some of the songs.

I have had more than 120 books published, mostly for children and teenagers, but also some novels and short stories for adults. I have worked with a range of editors in most of the major publishers and smaller ones too. In addition I have read the work of published authors such as Celia Rees, Michelle Lovric, Gill Vickery and Lucy Coats and have a reputation among them as an eagle-eyed editor.

On the Greystones Press, which began in 2016, I am a Director and have done hands-on editing on each of our titles, before sending them to copy-editors and proofreaders.


Grandma
I never had one myself (they both died before I was born) but I am one, currently to five children born between 2013 and 2018. Three girls and two boys, all deeply into books.

A grandma should be wise and loving. But also exciting and interesting. I don't know if I can manage all these but I'll try. Bring me your grammar query and we'll work it out together.

Home
Subscribe to: Posts (Atom)
I am your Grammar Grandma - think of me as your Fairy Godmother for Language. I'll be writing mini-essays here every week on an aspect of language: common mistakes, new usages, how to write more effectively. Look at the pages About me and What I can do for you to learn more.