This is a request post, to satisfy the need of one Philip Ardagh. He is in want of something to dispel uncertainty about when to use "that" and when "which" in introducing a relative clause. Happy to oblige, Philip, but you'll need to pay attention; this is a tricky one.

Indeed, the acknowledged authority on English usage, Henry Watson Fowler, said in 1926: "The relations between that, who and which have come to us from our forefathers as an odd jumble, and plainly show that the language has not been constructed by a master-builder who could create each part to do the work required of it, neither overlapped nor overlapping; far from that, its parts have had to grow as they could."

The distinction is between restrictive and non-restrictive clauses, or in older terminology, defining and non-defining clauses. To make things easier for Philip:

"The beard that I saw coming round the door preceded an extremely tall, bespectacled children's author," contains a restrictive or defining clause. It refers to that beard and no other of the many I might have observed during the day.

"The beard, which he had been growing since puberty, now measured twelve inches long," is non-restrictive or non-defining clause. It provides some additional information about the beard (though perhaps not about Philip's own beard; I made this bit up).

Word of the week: garden office

This is a very personal word of the week. In our new house - or rather outside it - I have a garden office. It is a stone-built room that shares a party wall with our garage. It already had a door, which is a bit of a pre-requisite for any room, but we added a window. Then it had to be insulated, painted, shelved and the WiFi made to work before I could start to use it. I took up residence a week ago. 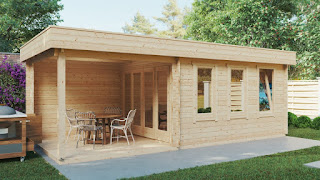 Last November, we ordered a garden shed, a humble wooden 7 x 5ft building to house garden tools, lawn mower etc. We were told it wouldn't be delivered till May 2021! We couldn't think why, until we realised the company that makes sheds also makes garden offices, which can be quite elaborate, with not just windows and doors but verandahs and other fancy extras. And since the first lockdown and the exhortation to work from home, everyone has been buying them!

Email ThisBlogThis!Share to TwitterShare to FacebookShare to Pinterest
Labels: Fowler's Modern English Usage, Grammar Grandma, Mary Hoffman, that or which?, word of the week

I'm not awfully convinced by the beard explanations..., from the word 'restrictive' onwards, in each case.

Pay Someone To Write My Essay said...
This comment has been removed by a blog administrator.
7 April 2021 at 21:37