I used to think this quotation was from Winston Churchill, he being half-American. But no, this perceptive remark was made by George Bernard Shaw (Americans would say "Bernard"). 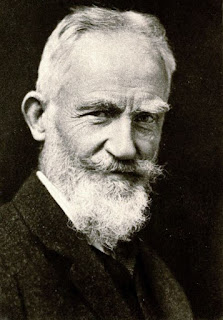 I have been reminded of it twice this week, first by an American acquaintance on Facebook, castigating "The Crown" TV series for making an egregious grammatical error. It was "made" by a young Prince Andrew and addressed to the Queen: "Like other second sons I could mention, I'd obviously be better at it than him." My American friend thinks it should be "than he," with "is" understood. She is right about American English but not about British Standard English, which we can assume HRH was using, where a pronoun takes the accusative form after a preposition. Sorry to have to say that Prince Andrew was correct, even in a work of fiction, but so it is.

I ran into this difference with my American editor for The Falconer's Knot (published by Bloomsbury on both sides of the Atlantic).

The other occasion came from watching my favourite TV cop show, Spiral, which returned on Saturday for its eighth and last season. It's a French series, named "Engrenages" in France, so it has to be watched with subtitles. But who creates these English versions? 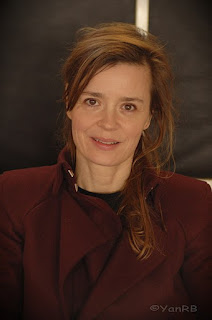 Caroline Proust from Spiral by YanRB

I am sad enough to be part of a Forum discussing Spiral after every two episodes and some of us are quite exercised about the use of American terms in the subtitles, when we are watching it in the UK. There are objections to the use of "laundromat" where a young boy's body has been found, when we would say "laundrette." And then, out of the blue, Laure Berthaud, played by Caroline Proust (pictured above), when asked what she has found out, "says "nothing, nowt." Now, I'm pretty sure that's not part of American vernacular!

When I was working on a project with an American publisher, she didn't know what I meant by someone not being "a patch on his father."  But then, I didn't know what she meant by a "blowhard." Truly, divided by a common language.

Word of the week: Challenging

The use of this word is growing, especially during political interviews and briefings. Homeschooling your special needs child is "challenging," Coping with the latest Covid restriction is "challenging." I wish more interviewers and questioners would "challenge" the use of this word, which is rapidly becoming an anodyne euphemism for "extremely difficult" or "impossible." It implies that if people fail to rise to the "challenge," they are somehow failing.


I am so delighted I found your weblog, I really found you by accident,
And would just like to say thank you for a fantastic post and a all round entertaining blog (I also love the theme/design), FAKE DRIVERS LICENSE THAT WORKS I don't have time to go through it all at the minute but I have bookmarked it and also added your RSS feeds, so when I have time I will be back to read a lot more, Please do keep up the excellent job.

Y’all don’t forget to join this DMV EXPERTS TELEGRAM GROUP for more information about new drivers license and updated materials being used along the production process of the DL . You can also take advantage to learn and meet many Experts who will guide you on numerous techniques for anyone who love hacking and don’t know how to go about it .