On 21st December, Eddie Izzard announced that she would be using the pronouns "she" and "her" in future, because she identified as gender-fluid and was wanting to be in "girl-mode" now. She hasn't as far as I know chosen a new name, just moved to female pronouns. 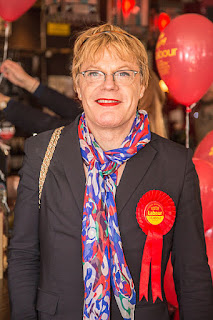 A month earlier Jan Morris, who used to be James, died and received mostly respectful obituaries, having changed both gender and pronouns in the late 60s and early 70s, in a long transition as one of the first high profile transsexuals in this country.

Traditional grammar offers a small group of pronouns which differ in inflection according to number, gender and function in the sentence. But traditional grammar can't keep up with changing ideas about identity and orientation and new pronouns have entered the language:

Here the sheer range is dazzling (I took the chart from Wikipedia). And there is no clue to what recent gender-identities they relate to. Non-binary, gender-fluid, pansexual, intersex, transgender people might choose to use one of the above, use traditional singular pronouns or opt for the very versatile "they, them. their" choice.

The problem is the lack of universal agreement, with such a lot of choice. But there is a movement now for people to introduce themselves by pronoun as well as name: "I'm Mary; I use she and her pronouns," "My name is Sam; I use they and them pronouns." This can only be helpful.

The new pronouns are not "gender-neutral" but "non-binary." 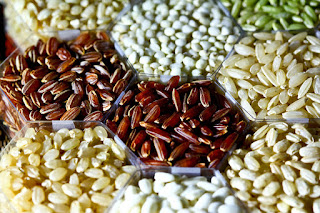 Word of the week: Granularity

According to the Cambridge dictionary this can mean: the quality of including a lot of small details. "Granular" and "granularity" has become extraordinarily popular with politicians in the run up to the UK/EU Brexit trade deal.

Grammar Grandma moved house on Friday and is having WiFi installed so no post today. She hopes to be sorted enough to post next Monday. Please send your words of the week/month/year. She is wondering about "granularity."

Posted by Mary Hoffman at 13:52 No comments:

Tom Lehrer knew it all decades ago

One of the presents I gave my husband for his birthday last month was a CD of Tom Lehrer songs. It was surprisingly difficult to track down one with enough of the songs I remembered from the 60s: National Brotherhood Week; the Vatican Rag; the Masochism Tango. 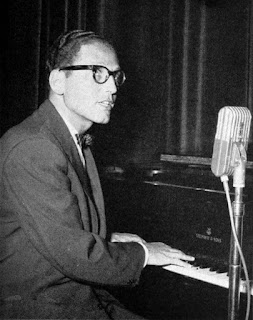 We listened to it in the car on a long journey yesterday. Songs about pollution and VD seem remarkably topical. But there's a plethora of tracks about WW3 and nuclear warfare - We'll all go together when we go; So long Mom (I'm off to drop the bomb); Who's next? and Wernher von Braun - conjuring up memories of the fears I had growing up and why I joined CND as a teenager.

All this was much as expected but the second half of the disc has songs I never about, written for an educational series on PBS.

Since Tom Lehrer, still alive in his nineties, recently made all his lyrics and music copyright free for a few years, I was able to find the words on the Internet.

Here is a song to teach the diphthong "-ou-:"

I don't bark or run around.

I just lie here on the ground,

With my head upon this mound.

No one knows where I can be found.

If they knew, then they'd be bound

To come and take me to the pound. 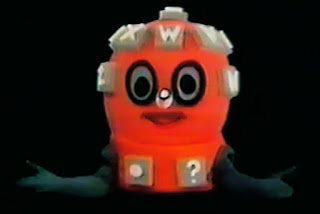 I may have told you before that from 1977 to 1995 I was the Reading Consultant to BBC Schools series Look and Read. Eighteen very good years. We had a little character called Wordy to sing songs written by people like Gordon Snell and occasionally myself. When I took over from Joyce Morris in 1977, recommended by her, the series concentrated largely on phonics. Words like sing and ping and looking would be clustered together solely on the grounds of sound.

When I joined, I moved the emphasis to meaning, so that the "-ing" would be taught as  a morpheme, conveying the sense that something was going on. We had a song with the cartoon character Bill the Brickie, singing : Why don't you build yourself a word?/Build yourself a word with an "-ing"/ To show it's happening. 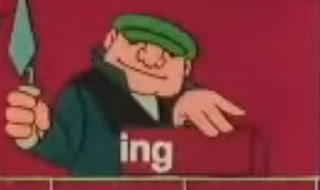 But we did do some songs about sounds and I remember writing the -ar- song (Dog detective is chasing ar/what a wonderful thing!.) And there was the "S+T+R" song from Badger Girl and "I'm listening, I'm listening/for an -ow- inside a tower" from Dark Towers (RIP Peter Mayhew, who was our Tall Knight).

Anyway, the minute I heard the -ou- song, I realised Tom Lehrer had done it all before, about twenty years earlier!

(You can find most of the Look and Read songs on YouTube - but there is a scurrilous version of Bill the Brickie, I should warn you!)

Email ThisBlogThis!Share to TwitterShare to FacebookShare to Pinterest
Labels: Grammar Grandma, Mary Hoffman, phonic songs, Tom Lehrer
Newer Posts Older Posts Home
Subscribe to: Posts (Atom)
I am your Grammar Grandma - think of me as your Fairy Godmother for Language. I'll be writing mini-essays here every week on an aspect of language: common mistakes, new usages, how to write more effectively. Look at the pages About me and What I can do for you to learn more.