Harold be thy name

This is a post about "mondegreens," which is in some ways linked to the one on malapropisms.

A Mondegreen results from a mis-hearing of a phrase or word in a poem or song lyric. American writer Sylvia Wright coined the term in 1954, writing that as a girl, when her mother read to her from Percy's Reliques, she had misheard the lyric "layd him on the green" in the fourth line of the Scottish ballad The Bonny Earl of Murray, as "Lady Mondegreen." 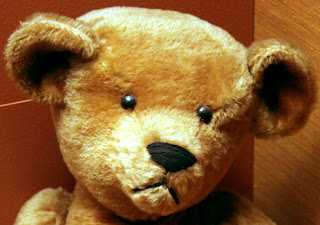 I'm sure many of you have heard of the mondegreen, "Gladly, thy cross-eyed bear," taken from mis-hearing a hymn line: "gladly thy cross I'd bear." And I've always liked "Our Father, which art in Heaven/ Harold be thy name. (I like to think of God's real name being Harold).

But I hadn't realised how widespread they were and that they work in other languages than English too. Wright said that the point about them and why they needed a term coined for them was that they are often better than the original wording.

does make one wonder about Lady Mondegreen and why she had to die too!

Yet the mishearing of The Star-spangled Banner to produce the nonsense adverb "donzerly light" perhaps doesn't quite make up in mystery for the lack of meaning.

A Monk Swimming by Malachy McCourt is so titled, according to Wikipedia, because of a childhood mishearing of a phrase from the Catholic rosary prayer, Hail Mary. "Blessed art thou amongst women" became "a monk swimmin'." And I can just see that monk doing the front crawl to approach the BVM.

Likewise, Olive, the Other Reindeer is a 1997 children's book by Vivian Walsh, which borrows its title from a mondegreen of the line, "all of the other reindeer" in the famous Christmas song about Rudolph.

You can have reverse mondegreens too, as in the song which goes:

A kiddley divey too, wouldn't you? 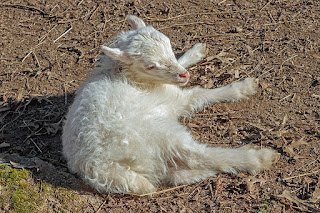 The clue to the meaning is contained in the bridge:

This makes it clear that the last line is "A kid'll eat ivy, too; wouldn't you?"

This was apparently sung to me as a baby, since my mother was called Ivy (though not spelled in the standard way) and, by extension, my father sometimes called me "Mairzy doats," which makes me a sort of Lady Mondegreen myself!

Word of the week: Mail-in ballot

We call them postal votes in the UK and they seem a very good idea, especially in a pandemic. CNN say 'This is a blanket term for any ballot mailed to voters, though the completed forms can be returned by mail, to a dropbox or in person to officials or polling places. In three critical states -- Pennsylvania, Michigan and Wisconsin -- officials weren't able to start processing any of these ballots until Election Day, which led to huge backlogs and slowed down the count."

But Donald Trump referred to them just as "ballots" which confused me, as every vote is a ballot and, when he said, "if there were no ballots, there would be no problem," he seemed to be saying, "if there were no votes, the election wouldn't be problematic."

Actually, he probably does think that at this moment. Ironically, he voted by mail-in ballot himself.

This is an open invitation for you to become part of the world's biggest conglomerate and reach the peak of your career. As we begin this year's recruitment program and our annual feast of harvest is almost at hand, so we're open for anyone who is willing and ready to become one of us. Are you a businessman/woman, politician, singer, student, Model, Graduate, Banker, Engineer, writer, pastor, footballer, barber, dancer etc. and you want to be rich, powerful and be famous in life? If yes, you can achieve your dreams by becoming a member of the Illuminati Brotherhood and receive a monthly salary of $500,000 USD. The Great Illuminati district is ready to offer you a life time opportunity, we are ready to change your life, make your Dreams come true and grant all your heart desires.

Below are 100% guarantee, once you're a member of the ILLUMINATI you will automatically become:

With this, all your dreams and heart desire can be fully accomplish, So you're advised to make up your mind and join the Great Illuminati Brotherhood and become rich and famous in life population and also be protected from all evils against you and your family.
I want you to know that if you think we're not real or been scammed is what you're afraid of, please you shouldn't be because this organization is a 100% guarantee and with the written guarantee you have, you'll know that this Brotherhood organization is real, safe and legit, you should be sure of this organization by now and there's no reason to be afraid of anything.

If you're interested in joining this Great Organization, then contact our Grand Lodge at Pennslyvania, USA via WhatsApp +1 (325) 261-7172 or our official Email: [illuminati666grandlodge@gmail.com]

Make up your mind before writing us!!!

WELCOME TO THE ILLUMINATI BROTHERHOOD ORGANIZATION.

I believe we all have a dream, a dream to become something big in life, so many people die today without accomplishing their dreams. Some of us are destined to become the president of our various countries or to become. one of the world's greatest musicians, footballers, politicians, businessmen, comedians or to be a helper to other people that are in need Note; newly recruited members are entitled to great benefits and rewards, There is no human sacrifice. If you are truly interested in joining the illuminati contact us today for more Information WhatsApp:+1(234)248-7286 OR +919205107358
Email: illuminatikingdomempire@gmail.com

IS IT POSSIBLE TO ACTUALLY GET BACK FUNDS LOST TO CRYPTOCURRENCY SCAM? ABSOLUTELY YES! BUT, YOU MUST CONTACT THE RIGHT AGENCY TO ACHIEVE THIS.

Visit WWW. RECOVERYPRECINCT. COM now to report your case or contact our support team via the contact information below to get started.