Word of the Week

I'm instituting a new feature: word (or phrase) of the week. It might lead on to an aspect of grammar, punctuation or vocabulary or might be tacked on to the end of a post about something else but there will be a new one to analyse and brood over every week.

It will come as no surprise that this week's word is circuit-breaker. 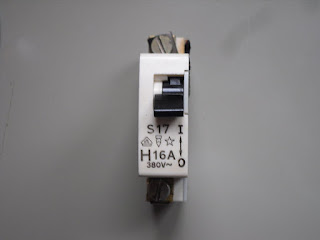 Here is Wikipedia's definition: "A circuit breaker is an automatically operated electrical switch designed to protect an electrical circuit from damage caused by excess current from an overload or short circuit. Its basic function is to interrupt current flow after a fault is detected. Unlike a fuse, which operates once and then must be replaced, a circuit breaker can be reset (either manually or automatically) to resume normal operation."

I'll tell you something else it is at the moment: a metaphor. For the government of Wales and perhaps soon that of N.Ireland, Scotland and the whole of the UK is not literally going to install electrical switches anywhere. They are going to attempt to halt the spread of Corona Virus by avoiding an overload of cases in their area. So "circuit-break(er)" or "fire-break" in the case of Wales is a technical term being used metaphorically.

What is the difference between a metaphor and a simile? A metaphor takes a word or phrase from one semantic field and applies it to another. For example, "the handling of the pandemic has been a total car crash." No actual cars have been involved; it's a metaphor.

A simile (from the Latin "similis" = "like") says that something is like something else. "A total lockdown (metaphor) acts like a circuit-breaker (simile)." It makes the comparison clear which the metaphor just implies.

Both metaphor and simile are "figures of speech." (There are loads more, which might crop up in future weeks).