Nobody likes a pedant

"1a : one who is unimaginative or who unduly emphasizes minutiae in the presentation or use of knowledge. b : one who makes a show of knowledge. c : a formalist or precisionist in teaching."

This is the Merriam Webster dictionary definition of "pedant." You see you have to get to the third possibility before you find anything positive said. No-one enjoys being corrected so pedants tend to be unpopular. But if you are a pedant, like me (unapologetically so), you actually spend a lot of time not correcting people and biting your tongue.

Just this morning on Facebook I have seen the following:

The only one I commented on was the second - because it was part of a meme pointing out that teachers were not getting pay rises, though MPs were.  It seemed to be a bad place to make grammatical or vocabulary mistakes. Even so, someone replied that the message was more important than proofreading. No doubt but it would have been a better post without them.

The first was in an inquiry to a children's book group I belong to; the writer is a newbie and someone I don't know so it would have been unkind to correct her.

The third is common even among people "educated" at Eton. It is just plain wrong. And so easy not to do! Just take out the other person. You would never say "my friend showed I," unless you were speaking dialect. It was in a post by a published author too.

The fourth is seen every day in FB advertisements for items for sale such as "chests of draws."[sic] But this one made me think of Tracy Emin's unmade bed installation.

In an article in the Guardian headed "Why do pedants pedant" David Steele concludes: "So, why do pedants pedant? We don’t really know, but some tangential studies infer it’s to do with a mixture of personality, status-signalling and group identification."

I couldn't find a picture of a pedant, but you can take the one at the top of this post as a real life example. And here is a picture of a "chest of draws," actually so labelled on Wikimedia Commons. Sigh. 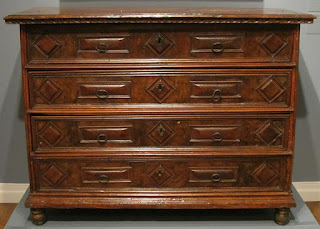 I had a nursing essay paper function that I was possessing troubles with. I decided to seek out some type of writing service to perform it and I was quite impressed that despite the short time frame, my writer was able to create a good quality nursing paper in so small time. I was amazed due to the fact I've been struggling with all the exact same paper for any couple of weeks. In a single day they took my operate, organized it into a coherent structure, added sources, bibliography now I am a frequent client.