Mrs Malaprop walks among us

Mrs Malaprop was a character created by English playwright Richard Brinsley Sheridan in his play The Rivals (1775). Her name is a nod to the French expression mal à propos, or inappropriate. What Mrs M does is misuse words, in much the same way as Dogberry does in Shakespeare's Much Ado About Nothing, which was one of my A level set texts (we also had King Lear, thank God).

We recently re-watched the DVD of Kenneth Branagh's sundrenched film of Much Ado, in which Dogberry was played by Michael Keaton and his sidekick Verges by Ben Elton, and they were so excruciatingly unfunny as to de-rail an otherwise excellent version (Has anyone ever seen a funny Dogberry?)

Anyway, Dogberry and Mrs Malaprop both use the wrong words "to comic effect," as Wikipedia assures us. Mrs M refers to someone as "the pineapple of perfection," which is actually quite nice (mistake for "pinnacle"). And I'm afraid, thanks to her, that one daughter and I use "derangements" when talking about plans we are making. Dogberry is called "tedious" by Leonato, which he definitely is, though Dogberry takes it as a compliment, meaning goodness knows what. 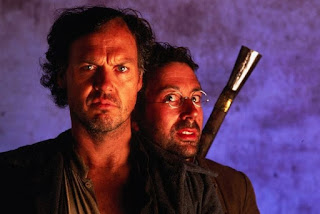 Anyway, why am I conjuring up Mrs Malaprop and Dogberry in today's post?  Because they are alive and well in the British media. Witness the pervasive "honing in" as used on Radio 4 last week, in describing tactics for coping with You Know What.

The phrase is, of course, "homing in," like a missile or a bit like a pigeon, but "honing" conveys the idea of precision, so has misled the speaker.

I had a friend many years ago who used to say "when push comes to pull," instead of "when push comes to shove." And another acquaintance who thought that "ultimatum" meant something like "ultimate aim in life," as in "her ultimatum was to be a secretary." These don't exactly count as malapropisms; maybe they are "eggcorns."

Do give me examples of malapropisms you have heard or seen.

Word of the week: translocation

No good looking this up on the Internet: you will get a "chromosomal abnormality." It is now being used as a description of a method of moving soil from the site of the HS2 route to another place so that its biodiversity might be preserved. It could of course mean "enforced migration" or describe what Donald Trump had done to immigrants' children, 545 of whom have not been able to be re-united with their parents.

It was great to see the look on my teacher's face when she returned my work with a big red A. I definitely impressed my professor who received a lot of positive feedback on my reflective essay. They wrote it to me in papernow. Order it now!