Alas, this is not an essay on Shakespeare's comedy set in the Forest of Arden. Though there may be some of Jacques' cynical view of human nature. No; the title was designed to draw you in and talk about the use of "like" in contemporary English. 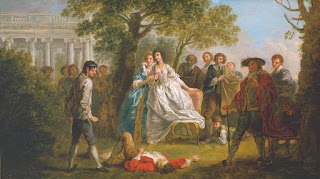 If you are a grammar nerd, like your Grandma, you might still be fighting a losing battle against "like I do." But I think the use of "like" instead of "as" for a conjunction is here to stay. I would say, "as I do" or "like me," but I accept I'm an old fuddy-duddy about this usage.

What annoys more people than me is the use of "like" to punctuate speech. It's employed as what linguists call a "filler" or a "hesitation marker." Others are "er" and "um' or that strange waffling noise our Prime Minister makes. A filler gives the speaker time to think, even if only for a second, while searching for the next word.

Watch this YouTube clip from 2016 in which two London teenagers are teaching the interviewer about the use of terms such as "gassed" and "bookey." They are quite unaware of how often they are using "like" as a filler.

"It means, like, to be, like, excited or wowed by something," says Lily, defining "gassed." There's no sense of any comparison here; it's just a filler.

Also interesting and equally annoying to some, is the use of "like" to mean "say" or "said." Imagine this report of a dialogue:

There's no "he said, she said" any more apparently. It's all "he's like, she's like." But it doesn't work in writing.

At a time when there was a blockage with my studies and academic performance, when I was not good at writing, it is good that I was advised the homework help, which does written work for students to order.

Article writing can be a good choice in opting career: it has benefits and does not make bad out of you. It can be fun writing for newspapers, magazines and websites ( https://rankmywriter.com/academized-com-review ). It inhances the person’s opinion about almost everything in diverse fields.