The Proof and the Pudding

I heard it used only this morning on Radio 4 and it made me think I must write about it. The commentator said "The proof is in the pudding." The expression is:

The proof of the pudding is in the eating.

That means "you won't be able to tell if something has worked out all right until you put it to the test." So imagine making what should be a delicious pudding but you have used salt instead of sugar. The "proof" of that pudding, i.e. "does it taste nice?" would be refuted by the eaters, who would find it disgusting.

What can "the proof is in the pudding" possibly mean? I often receive proof pages or "a proof" from publishers but they never arrive baked into a pudding. Pity, you might say, but I don't miss it; I think the yummy surroundings would be offset by grease and crumbs on the sheets of paper.


Of course, I am visualising these soggy pages as being in a sweet pudding but steak and kidney would be even worse.

You might say about the UK government's plans to beat or reduce COVID -19, "The proof of the pudding is in the eating," meaning, "let's wait and see if this turns out well.

But "the proof is in the pudding" is definitely gaining ground.

Here's another: "You've got another thing coming."

What is that thing? It sounds quite ominous, doesn't it? The actual expression is:

"You've got another think coming."

Odd, isn't it? We don't usually talk about "thinks" as a noun when we mean "thoughts." It's the second half of a sentence, "If you think that, then you have ..." That is, you've thought something that is wrong and you are going to have to revise your opinion. And it is quite vehement.

There's some overlap here with my last post, about homonyms and near homonyms, but while looking up phrases commonly got wrong, I found hilarious examples I'd never even seen or heard like, Statue of Limitations for Statute of Limitations and "Escape Goat" for "Scapegoat." I'd love to see images for these! And for "Card Shark" and "taken for granite."

What has happened here is that someone has heard a phrase, rather than read it, and assimilated it to another word they know. Fair enough. And a "card shark" is just as likely as a the actual common term.


But what has happened to meaning in "Escape goat" or "the proof is in the pudding"?

I think the trouble is that people don't expect common phrases and words to mean anything! Yet Semantics (The study or science of meaning) is a discipline within Linguistics. It's a crucial aspect of language, usage and grammar.

Here are some more commonly misused words or phrases.

"He has prostrate cancer." No, he really doesn't. "Prostrate" means lying on the floor, face downwards. The gland that may get cancer is the "prostate." Of course, such a diagnosis might make a man want to lie down on the floor but that is not the word you want here.

"Can I have an expresso, please?" No you can't; it's an "espresso." "Expresso" gives the idea of the coffee coming fast, and I hope it will when you need that caffeine shot. But "espresso" is Italian for "expressed," meaning put under pressure, which is how this is made: 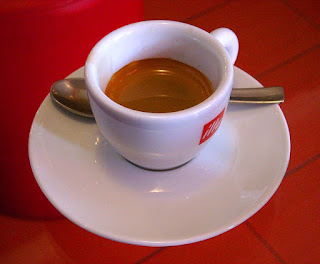 I can see a little bit of logic in "expresso" but what are we to make of "Doggy dog world"? The expression is "Dog eat dog world." That is, a world like financial dealing in the City where the normal laws of nature are suspended and anyone will do anything to get on. But please, someone, tell me what "doggy dog world" can possibly be supposed to mean? It sounds the opposite: a sort of cuddly, shaggy, happily panting and tail-wagging environment.

There's a little bit of logic in "expatriot" when "expatriate" is meant too. It's quite judgmental: implying someone who has left their country of origin to settle in another land has forfeited the right to be patriotic. It's usually shortened to "expat" anyway, so people don't have the opportunity to see the correct version in writing.

But what are we to make of someone saying "pass mustard" when the phrase is "pass muster"? It's true that the word "muster" has fallen out of use, because not many of us are subjected to military inspection, which is what it means in the phrase.  If you "pass muster" you come through some sort of test or assessment successful. But goodness only know what happens to you if you "pass mustard"! It sounds most uncomfortable and explosive.