Starlight, star bright
First star I see tonight
I wish I may, I wish I might
Have the wish I wish tonight.

This is a blog post about when to use "may" and when "might. It's about possibility, not permission. So not "may I have another cup please?" which is a polite way of asking "can I have..."

As with every post, I'm going back to basics, assuming that if you are consulting this blog, you are a bit uncertain about something and would like a firm rule or at least a steer about grammar, usage, meaning or perhaps pronunciation.

Actually, the battle for "might" may be over. Mighty as it sounds, this word is being vanquished by mimsy little "may."

Take this sentence, from reports, written and spoken, on a pretty horrible case of murder, maiming and suicide ten years ago:

"Raoul Moat said that he may hurt any police officer he comes across."

This is not verbatim but there were many reports of this kind. What's wrong with that sentence? Nothing, as far as meaning is concerned. A man who would shoot and kill his former girlfriend's new lover and badly injure the young woman herself, believed that she was having an affair with a police officer; consequently all male members of the police force were at risk.

The issue here is Direct Speech versus Reported (or Indirect) Speech

If the reporter had said or written: 'Raoul Moat said, "I may hurt any police officer I come across,"' then"may" would OK, because that's what he actually said, the words withing the speech marks or inverted commas.

The minute you use "that" after "he said," you are not quoting Moat's (or anyone else's) actual words but reporting them at one remove. So the verb "may" goes into the past tense, "might."

"May" is also OK in the sentence "RM says that he may hurt any police officer he comes across,"
because it's reported speech in the present. "May" is the  present tense and "might" the past.

If you wanted to make an excruciating political joke, you might name the ex-Prime Minister Theresa Might. 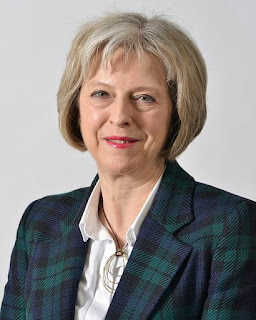