A few days ago I received an email from our estate agent, writing "they should of told you."

How has this mistake come about and why is it now so widespread that a reasonably well-educated person can write it?

Can you imagine Eliza Dolittle singing "I could of danced all night"? 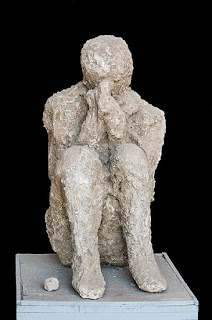 A university teacher friend asked on Facebook today asked if she must now accept "he was sat" and "she was stood" in students' writing. It's a dialect form from the north of England, which is beginning to replace "he was standing" and "she was sitting" in Standard English. Why?

"Stood" and "sat" are past participles of the verbs "stand" and "sit." "Standing" and "sitting" are present participles. My theory is that in their determination to express a past action, the user of this form doesn't want to rely on the little word "was" but needs to emphasise the timing of the action by putting the participle into a past form too.

Is this meerkat sitting or standing?

Email ThisBlogThis!Share to TwitterShare to FacebookShare to Pinterest
Labels: "he was stood.", "should of", Grammar Grandma, Mary Hoffman

I’m not convinced by your theory of it’s enforcing the past tense. In Cumbria, and probably elsewhere in the north, the past participle is used for the present in a present tense context, eg ‘that’s dirty - it wants washed.’