It's a matter of prepositions. Forgotten what they are? Take a look at the Parts of Speech page. 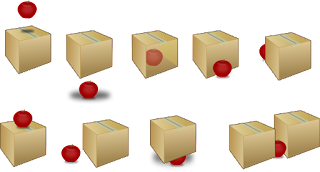 This illustration, from Wikipedia Commons, depicts a ball which is, from Right to Left: above, below, inside, outside, behind, on, beside, under and between a box or boxes. So far, so straightforward but it's harder to depicts some of those pesky little words like "to" and "from," which are a bit more abstract.
So what preposition should follow the adjective "different"? Should? If you read last week's Grammar Grandma post on "the rules" of grammar, you might be imagining I'm going to tell you what you should say and write. No.
I'm going to tell you what the Standard English form is and it is "different from." This is because one thing "differs from" another, not "to" or "than" it. And yet these forms are more and more popular in speech and writing.
"Different to," I can just about understand because a comparison is being made - though "compared with" vs. "compared to" is a another disputed grammatical construction!
But how to account for the now ubiquitous "different than"? I suppose it runs thus: you can have bigger than or taller than or older than so why not different than?
Why not, indeed? I can only tell you that I'd never do it, in speech or writing. And I don't think you's say one thing"differs than" or "differs to"another.
You can't go wrong
with "different from."
Posted by Mary Hoffman at 10:35

Email ThisBlogThis!Share to TwitterShare to FacebookShare to Pinterest
Labels: the rules

Bigger and taller - the middle comparative.

It is an absolute like "unique" [that is: it's the only one of its kind].

And that illustration is great!

When I was young it was "You are different from your brother or your sister".

The other EAL student had a different grounding from mine.