But not only has Charles Williams made it, in however garbled a form, to our TV screens in an episode of Lewis, called "Magnum Opus;" a definitive biography has just come out.

Magnum Opus was pretty average hokum, featuring alchemy, tattoos and an alarmingly thin Honeysuckle Weeks. The murder victims were all members of a cult, apparently based on some ill-digested theories of Williams' theory of "co-inherence" - interpreted here as "taking someone else's guilt." The trouble was, the murderer didn't buy it and was picking them off one by one.

It was just odd to hear someone being talked about that has been part of my life, at one remove, for so long.

The real Charles Williams was known as "the third Inkling" and that is also the title of the new biography, a labour of love and over a decade, by Grevel Lindop.

So, as Sam Pepys, might have said, to Blackwell's last Thursday for the launch of the new book. 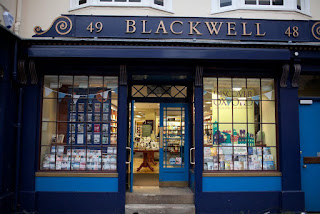 There could not be a more appropriate venue to launch a book about a man less known than his two fellow Inklings, C.S. Lewis and J.R.R.R. Tolkien, but who had a powerful presence at their meetings at the Eagle and Child. Lindop describes him as the "missing piece of the jigsaw" - a novelist, publisher, lecturer, poet, critic and, yes, magician.


I've tried one novel, The Place of the Lion, which also turned up in Lewis, and it was not for me. But I'm going to give the poetry a go - "Taliesin through Logres" and "The Region of the Summer Stars" (I salute his ability with titles). And I shall definitely read The Third Inkling. The author made his subject sound fascinating.

I wasn't sure about the spanking with a magic sword kept in the cupboard at Williams' office at OUP, but maybe I mis-heard. It's the versatility that appeals to me. And Lindop is a bit of a Renaissance Man himself - retired Professor of Victorian Literature, expert on Thomas de Quincy, poet and accomplished Salsa dancer.

It clearly takes one to write about one. 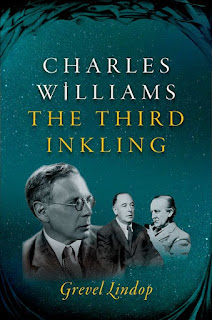 Given the complex plot, I wasn't entirely sure that Charles Williams existed, so thank you for this post. (I admit I dozed off at one point. At least.)

The one to read is 'All Hallows Eve'. Mary. I love that one!

Oh! How fascinating! When I read James Owen's Here There Be Dragons, I couldn't find much on Charles Williams, and I wasn't sure if he were real or imaginary! I'll have to see if this book is available in the US. Thanks for the heads up.

Thank you so much for this post!! May I reblog it on The Oddest Inkling? http://theoddestinkling.wordpress.com/

Pretty good post I just stumbled upon your website and wanted to say that I have incredibly enjoyed reading your blog posts Any way I am going to be subscribing for the feed and I hope to visit your article once again soon.
cara paling jitu mengobati gagal ginjal tanpa cuci darah

His form has been filled. Thank you friend b(^)
cara jitu mengobati usus buntu tanpa operasi

After being in relationship with Wilson for seven years,he broke up with me, I did everything possible to bring him back but all was in vain, I wanted him back so much because of the love I have for him, I begged him with everything, I made promises but he refused. I explained my problem to someone online and she suggested that I should contact a spell caster that could help me cast a spell to bring him back but I am the type that don't believed in spell, I had no choice than to try it, I meant a spell caster called Dr Zuma zuk and I email him, and he told me there was no problem that everything will be okay before three days, that my ex will return to me before three days, he cast the spell and surprisingly in the second day, it was around 4pm. My ex called me, I was so surprised, I answered the call and all he said was that he was so sorry for everything that happened, that he wanted me to return to him, that he loves me so much. I was so happy and went to him, that was how we started living together happily again. Since then, I have made promise that anybody I know that have a relationship problem, I would be of help to such person by referring him or her to the only real and powerful spell caster who helped me with my own problem and who is different from all the fake ones out there. Anybody could need the help of the spell caster, his email: spiritualherbalisthealing@gmail.com or call him +2349055637784 you can email him if you need his assistance in your relationship or anything. CONTACT HIM NOW FOR SOLUTION TO ALL YOUR PROBLEMS'

very interesting information, I really like it because it can add insight for me more broadly, thank you very much for this
extraordinary information
Cara Membuka Saluran Tuba Falopi Yang Tersumbat Tanpa Operasi,

LOVE SPELL CASTER (DR. GBOJIE) THAT HELPED ME BRING BACK MY DIVORCE HUSBAND CONTACT HIM NOW FOR ANY KIND OF HELP

With so much in my heart i am here to express myself on how Dr. GBOJIE saved my marriage from divorce. Myself and my husband were having some misunderstanding and it was tearing our marriage apart to the extend my husband was seeking for a divorce. So i have no option than to go to the internet to seek for solution to my problem it was there i came across Dr. GBOJIE details and about how he has helped a lot of people by restoring there relationship. I contact Dr.GBOJIE and in less than 48 hours my husband cancelled the divorce papers. Now myself and my husband live together in peace and harmony all thanks to Dr.GBOJIE for saving my marriage from breaking up. Dr. GBOJIE contact information are via email: gbojiespiritualtemple@yahoo.com , gbojiespiritualtemple@gmail.com or call his phone number or WhatsApp: +2349066410185 .or check out his website :http://gbojiespiritualtemple.website2.me

Explore the profiles of guwahati escorts, guwahati call girls, call girls in guwahati and
escorts in guwahati for female companionship in top rated hotels. Get affordable
escort services in guwahati hotels now.Nitu Roy is a popular and
trusted name in the field of call girl service.
Guwahati Call Girl
Call Girl in Guwahati

Guwahati Escorts or call girls in Guwahati are those call girl who are rocking and
amazing in terms of better-quality sexual performance for the customer.
Guwahati Call Girls
Call Girls in Guwahati

We serve our Guwahati escort service in the whole Guwahati city Our services are at
the top when it comes to Escort Service in guwahati. We have the
best call girl in guwahati to satisfy.
Guwahati Escorts
Escorts in Guwahati

I really loved your post so much that I cant resist writing comment...Please check mine as well
Bhubaneswar escorts
Escorts in Bhubaneswar