Plenty of Ham - no let 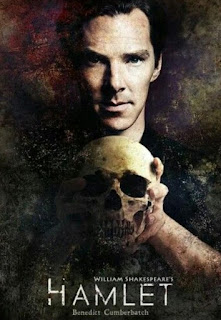 Well, I've seen it now. Only the cinema relay of the National Theatre's production inevitably known as the "Cumberbatch Hamlet." But I'm glad I didn't scramble for tickets online last summer.

We've been here before. I don't know if the "celebrity Hamlet" began with David Tennant but it was when I became aware of it, of an audience full of teenage girls. I was there in the flesh that time but, paradoxically it was Hamlet without the Prince of Denmark in one sense, since DT had succumbed to back pain and Edward Bennett was substituting for him.

We bought the DVD.

By celebrity, I mean an actor who is better known at the time for his work on TV or film, not a famous stage actor, like Simon Russell Beale or Rory Kinnear. And it must be one with a huge female fanbase. Maybe the rot set in with Jude Law?

Both Benedict Cumberbatch and David Tennant are good actors - the latter was an excellent Berowne in the RSC's Love's Labours Lost, which I saw in Stratford. The problem is with Hamlet as star vehicle. Of course a good performance at the centre is crucial but you need a good ensemble too. In the "Tennant Hamlet" Penny Downie was the best Gertrude we had ever seen and Patrick Stewart won an award for his Claudius (though he was surprisingly discombobulated the night we saw it and fluffed his lines). Oliver Ford Davies was an excellent Polonius.

But that was directed by Gregory Doran, who knew what he was doing with the text. The teenage girls at the performance we attended didn't get their hero but they did get Shakespeare's Hamlet. The same can't be said for anyone who saw this new production.

Director Lyndsay Turner's attitude to the text seemed to be "good first effort - I could make it better." This tends to be an unwise approach to Shakespeare, who knew a thing or two about the theatre. I found myself largely in agreement with Michael Billington's review in The Guardian. And if that makes us both old farts, so be it. 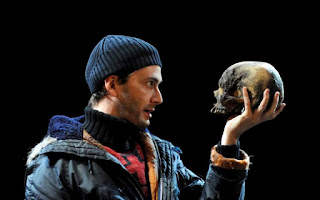 My beef is not so much with the performances as the direction and the cuts. Though while we're on performances, the best came from Ciaran Hinds as Claudius (I'm beginning to think that Claudius is an actor-proof role). The worst were Sian Brooke as Ophelia (I have never seen a good Ophelia, so maybe that part is the opposite of Claudius's?) and Karl Johnson as the Ghost, which he played a bit like Sylvester McCoy - I expected him to get some spoons out any minute.

The play, in Turner's version begins with Hamlet listening to LPs on an old record-player and looking at old photos. He misses his dad. So we lose the first battlements scene and with it Horatio's "the morn in russet mantle clad ..." speech, though other of his lines are relocated.

More importantly you lose the eerie feeling of bluff soldiers on watch being unmanned by the apparition of the king. The point that Hamlet is missing his dead father is made rather well by Shakespeare in the first court scene. That however is here a dinner party, at which no food is consumed, a very unconvincing setting for the giving of a diplomatic mission.

It is easy to say both "don't be such a purist!" and "the text is disputed anyway." I'm aware of the problems with the Hamlet text and famous cruxes (not Horcruxes, note) like solid/sullied, bad dreams/had dreams etc. BUT Turner's slash and burn attitude must come from a desire to make the action and emotion of the play to come across to a modern audience of young fans who love the sharp cheekboned one in Sherlock.

And here is an example of how this is quite unnecessarily. In Act One, scene iv, when his friend and the soldiers are trying to stop him following the Ghost, Hamlet says, "By Heaven I'll make a ghost of him that lets me!"

You can see Turner thinking "Oh dear, 'let' now means 'allow' - people won't understand." So the line is changed to "By Heaven, I'll make a ghost of him that stays me." (Why not go the whole hog and say "stops"? It is half-baked). But Hamlet shows by his actions what he means, so the text change doesn't help the innocent ear of someone seeing the play for the first time and it jars for those who know the play well.

It's a long play. You get the whole of it in Kenneth Branagh's 1996 film and that had to have an interval in the cinema. Most people accept that cuts will be necessary in a stage performance. We can live without the "eyrie of little eyasses" or "the vicious mole." And cutting the Polonius/Rinaldo subplot makes some sense, since it is never returned to, but it does rob Polonius of some of his devious character.

But these are some of the small, meaningless cuts: we lose "hugger-mugger," "chaste treasure," "unhouseled, disappointed, unannealed," "stockings foul and down-gyved" (too infra-dig for a sex god?), "vile phrase, " "caviare to the general, " "miching mallecho," "long purples," "Imperial Caesar dead and turned to clay," "get thee to my lady's chamber,"etc. etc.

Speeches are reassigned to different characters, as when Horatio says "something too much of this," "but not by [me]" is taken from Gertrude and given to Claudius. The part of Osric and the funny business with his hat is cut, there is no mention that young Hamlet is thirty years old, we are not told that the play-within-the-play is called The Mousetrap, the recorders Hamlet calls for after the play scene are represented mysteriously by a soprano saxophone and, worst of all for me, the Prince says "except my life" only twice, not three times.

Soliloquies are blessedly not cut but they are moved around. I say again, that Bill Shakespeare knew a thing or two about how to structure a play. What makes Lyndsay Turner so sure she can do it better? She can't.

It's lovely that young people are drawn in to see a Shakespeare play because one of their heroes is in it. They do deserve not to be patronised though and be given the real thing. As Benedict Cumberbatch could have done had he been better directed. 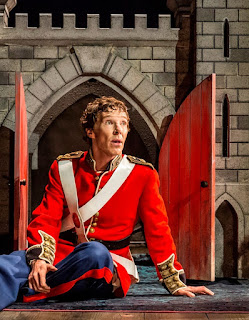 Email ThisBlogThis!Share to TwitterShare to FacebookShare to Pinterest
Labels: Benedict Cumberbatch, Hamlet, Lyndsay Turner, Mary Hoffman, National Theatre, William shakespeare
Newer Posts Older Posts Home
Subscribe to: Posts (Atom)
I am your Grammar Grandma - think of me as your Fairy Godmother for Language. I'll be writing mini-essays here every week on an aspect of language: common mistakes, new usages, how to write more effectively. Look at the pages About me and What I can do for you to learn more.