An appreciation of Terry Pratchett

Since the publication of The Shepherd's Crown, we have seen adulatory reviews like A.S. Byatt's, ill-informed denigration like Jonathan Jones's and spirited rebuttals like this one by Sam Jordison. Since I was out of the country for most of this, I wanted to write my own quiet appreciation of Terry Pratchett, a sort of emotion recollected in tranquility, reflecting on his long literary life, sadly not matched by his actual years. His death earlier this year came as a profound shock to his fans, among whom I count myself, even though they/we were all too well aware of his cruel illness. It was always going to be too soon. Perhaps that is why there is such thin-skinned sensitivity to attacks like Jonathan Jones's spiteful little piece, dubbing the novels "potboilers," without having read them.

Having seen the covers (which I will admit put me off too) and flicked through a few pages in a bookshop, he dismisses them all as trash, not worth bothering with. (In a follow-up piece, he remedied this by reading Small Gods, but said his idea of a great literary masterpiece was - by implication - Philip Roth's Portnoy's Complaint. This doesn't need a comment!)

I will not make any case here for TP as a writer of great literature; I will simply try to explain why I love and re-read the best of the Discworld novels and why I find some of his characters indispensable. To backtrack a bit, I was introduced to the Discworld by my oldest daughter when she was in her early teens, so some twenty-five years ago. It that even possible?

I didn't find the first two - The Colour of Magic and The Light Fantastic - particularly addictive and I might have written them off as another of my daughter's SF and fantasy enthusiasms I couldn't really share. And I was constantly annoyed by the spelling of Sourcery as it kept appearing in the Bookseller's bestseller lists.

So when did my TP habit kick in and become unkickable? Being a completist, I did read them in the right order so was it around  Equal Rites (3) or Mort (4) that I suddenly got it? I even read Sourcery (5). I have always loved the three witches (Equal Rites, Wyrd Sisters, Witches Abroad, Lords and Ladies, Maskerade) and it is a matter of some pride that all three of my daughters regarded me as a mixture of Nanny Ogg and Granny Weatherwax, long before I had grandmother status IRL.

I met Terry on several occasions and must admit I was a bit disappointed the first time. But I think he mellowed and came closer to the authorial personality shown in his books. Or perhaps I became less demanding of a hero. Certainly what I admire most in his writing is his humanity and generosity and would like to think those must have been the major characteristics of the man.

That and his inventiveness and prodigality - all qualities I find and admire in Dickens. And of course the humour. But also the rage. Neil Gaiman was so right to say that TP was not a jolly elf. There was a fury against the injustices and cruelties of the world that underlies so much of the humour and inventon. Fury about the abuse of religion (Small Gods), about racial prejudice (Carpe Jugulum, Thud!). I wish he were here to write about the current refugee crisis. 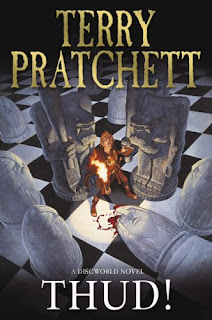 A fan without being fanatical, I always waited for the paperbacks, except for when his publishers sent me early review copies of the hardbacks - on two or three occasions even bound proofs. I remember a particularly glorious Sunday morning one autumn, realising I had an extra hour in bed to read the latest TP sent to me (Hogfather).

The Unseen University with its wizards and orang-utan Librarian, the Witches, the City Watch, the Patrician, Lord Vetinari, etc. etc. are all part of a fully-imagined world, as the "extras" like maps and other addenda attest.

Of course there were flaws. In Vimes, as later with Granny Weatherwax and Tiffany Aching, you felt an authorial over-attachment or identification, a "cannot fail" aura. That must make the opening of The Shepherd's Crown all the more poignant.

As death came closer to Terry Pratchett, I hoped that it would be like his own remarkable creation Death. the upper case talking, scythe-wielding skeleton that made mortality palatable, just as  TP's books made life more enjoyable.

I don't feel grief, as so many of my friends do, that there will be no more Discworld novels. It was always going to be a finite number, if you think about it. As literary innings go, TP the writer had a very good score. I just wish Terry the man were still not out.

* I am not so keen on the Tiffany Aching books aimed at younger people so have chosen just from the adult canon. 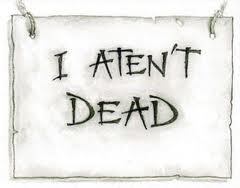 Thanks, Mary, from a fellow fan. As for that man in the newspaper there will always be some you can't change and who will never get it. Leave him to his Philip Roth books - his loss, not anyone else's.

I did love the Tiffany Aching books. To my mind, they didn't go downhill, while the mainstream Discworld books did, somewhat. I think that Thud! was the last one I simply adored. And Going Postal - did that come out later? Can't remember. That was great, Making Money not so much.
But I remember when he was in Melbourne for a Discworld convention(bringing with him lots of plastic teeth from the Hogfarher film). He was working on Making Money at the time and read to us from his manuscript for over an hour, till his laptop battery ran out. That was generosity! He came to speak to the children in the children's program room at the Australian Worldcon in 1999 and hung around to chat with the youthful cast of the play of Wyrd Sisters at the Discworld con I attended.

I haven't read the last book quite yet because, well, it is the last! I'm doing a massive reread first.

An amazing man, and his books will be classics.

Lovely piece, Mary. I think the witches' books are my overall favourites - and Death, strange as that may sound to anyone who's not read the books, is probably my favourite character.

relationship call ladies Doha Escorts to have a laugh whilst you are inclined to sense younger all the way up.extraordinary than this we've the Escorts carrier Pakistan which are tasteful will please you with the proper looks and the proper conduct that they have got as being of a female, to say extra they may be all over more than better than deciding on some other Escorts in Doha .

You can book call girl in Guwahati or escort Service in Guwahati for incall facility
or outcall Facility as and when required.To book Guwahati call girls you
can visit the following links
Guwahati Call Girls
Escorts in Guwahati

Hello, This is a Nitu roy very interesting blog. this content is written very well This is an amazing
post, keep blogging.thanks for sharing.Anyways I am here now and could just like to say thank
for a tremendous post and a all round entertaining website.
Guwahati Escort
Call girl service in Guwahati

Maybe you are also looking for the right person to ensure the higher quality
sex and that’s why you are in this place because here we are going to share
the data and information of Guwahati Escorts.
Guwahati escorts
Escorts in Guwahati