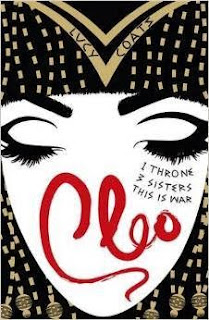 It can be hard reading and reviewing books by someone you know. My reputation is as a pretty rigorous critic and this can come into conflict with warm feelings for a writer.

I heard a lot about Cleo in Bologna, not just from its agent Sophie Hicks but also from its author, my travelling companion and good friend Lucy Coats. And I'd already been seduced by that gorgeous cover by Thy Bui.

But after a few pages, if it's a good book, you forget all that and just give in to the power of the story. And Cleo is a very good book indeed. For a start it's a brilliant premise, the "before they were famous" one. Young Cleo doesn't know she's going to become the "serpent of old Nile." She doesn't know she'll be celebrated by a sixteenth century playwright and bodied forth by Helen Mirren, Glenda Jackson, Harriet Walter. Least of all that she'll be portrayed by the black eye-linered siren Elizabeth Taylor in an iconic movie on the 1960s.

No, none of that. She's just a young girl, watching her mother die and suspecting her half-sisters, Berenice and Tryphena, of the murder. She has one ally, her slave Charmion [sic], who is so much more than a servant. The two girls are friends and Charm, as she is known to Cleo, finds a way to get them both out of the court which Cleo's father, the Pharaoh, has abandoned. And just in time, since the evil half-sisters enjoy feeding enemies and rivals to their crocodiles. Piece by piece.

Four years later, Cleo and Charm return to this dangerous place, with a mission to find and rescue an Ancient Egyptian McGuffin, the captured secret that is causing the goddess Isis' power to wane. For Cleo is the chosen servant of Isis, marked out for this destiny from birth.

And there is a secret ally in the court, who does not want the death-worshipping Berenice and Tryphena on the double throne of Egypt. Khai works in the Great Library and Cleo has felt something for him since she was little because of a shared love of learning and a thirst for knowledge. But on her return she finds him in the new role of toy boy to Tryphena.

Together the three young people, Cleo, Charm and Khai, with the help of a few other allies, work to overthrow the half-sisters and restore Isis' power but there and dangers along the way and several very gruesome deaths.

(Of course this is all invention: no-one knows anything about Cleopatra's early life, before Caesar, before Mark Antony and long before the fatal asp.)

One of the things I really enjoyed about Cleo was the rich sense of actually being in Ancient Egypt. Lucy Coats' thorough research underpins a seemingly effortless recreation of the smells, sights and sounds of Alexandria and the banks of the Nile, still then teeming with crocodiles and hippos. And all this is achieved without recourse to any faux-ancient language.

The second book, Cleo: Chosen, will follow soon and we'll get the end of the adventure, which takes Cleo to Rome, presumably still unknowing what part the Eternal City will play in her future. I will be waiting as eagerly as a hungry crocodile.


* The seductive rhyme from Julian Slade and Dorothy Reynolds" musical Salad Days, whose title is of course also a quotation from Shakespeare's Antony and Cleopatra: "My salad days, / When I was green in judgment, cold in blood...."

Maybe you are also looking for the right person to ensure the higher quality
sex and that’s why you are in this place because here we are going to share
the data and information of Guwahati Escorts.
Escort services in Guwahati
Call Girl services in Guwahati