A Rhino, a Rainbow and an icon

Anyone on here remember "bibliotherapy"? It was big in the '70s and meant that there should be an "issue" book to go with most "issues" that a child would encounter - everything from a new sibling and first day at school to death and divorce.

The best books just had a good story - like John Brown, Rose and the Midnight Cat or Badger's Gifts and children took what they wanted from them.

These days we don't hear much about bibliotherapy  - maybe because there is such a plethora of what we'd now call "issues books" that people take it for granted that a well-written, attractively illustrated book can make children feel better about a lot of things. 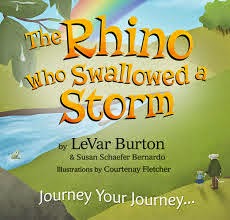 This sympathetic picture book deals with children's fears in a way that is both striking and comforting. The authors are LeVar Burton and Susan Schaefer Bernardo and the illustrator is Courtenay Fletcher. I don't expect I'm the only one who knows far more about the first name than about the other two, especially in the UK.

LeVar Burton sprang to stardom as the twenty-year-old star of the TV version of Alex Haley's Roots; he was Kunta Kinte and was the Chiwetel Ejiofor of his day: 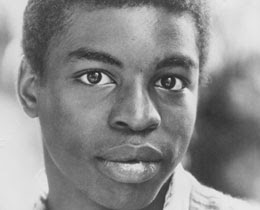 But then he had a whole new career as Geordi La Forge in Star Trek: The Next Generation up on deck with captain Jean-Luc Picard, Lieutenant Riker, Data and Whorf. He was a blind Chief Engineering Officer with a VISOR that allowed him to sense energy waves, a prop based on a woman's hair barrette that gave him a headache every day on set for six years.

And then this versatile actor got the job of presenting the US children's literacy TV series Reading Rainbow and was immensely popular in this role. Now that Burton has tried his hand at writing the same warm, avuncular personality comes through in the text of The Rhino who Swallowed a Storm. Schaefer Bernardo is a poet so I'm guessing she helped Burton turn his story into rhyme.

There is a framing device of a father mouse comforting a little one who  lost her house in a hurricane. When a new storm is raging, Papa mouse puts down his copy of Gouda Times (nice!) and reads her the story of the rhino. (Actually I think the book would have been just as good without this device).

The rhino comes from a time "before there were words" and when a terrible storm destroyed all that was dear to him. He was so upset and angry that he opened his mouth and gulped the storm down inside himself.  It took a long time a lot of help from his friends before he was able to release it in a storm of tears.

It's a book about alowing yourself to let your feelings out and about how we all need help from others.

I don't know if it's available in the UK but it certainly should be. 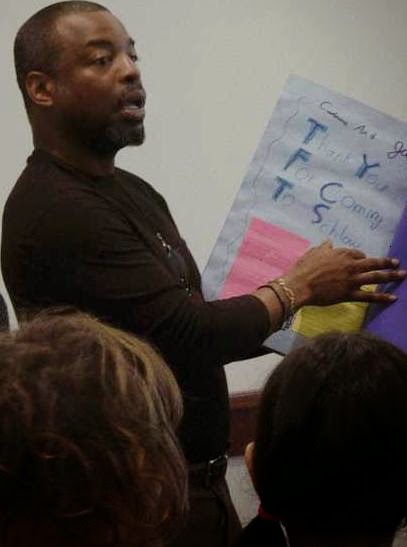 Email ThisBlogThis!Share to TwitterShare to FacebookShare to Pinterest
Labels: Courtenay Fletcher, Geordi La Forge, Mary Hoffman LeVar Burton, Reading Rainbow, Star Trek TNG, Susan Schaefer Bernardo, The Rhono who Swallowec a Storm
Newer Posts Older Posts Home
Subscribe to: Posts (Atom)
I am your Grammar Grandma - think of me as your Fairy Godmother for Language. I'll be writing mini-essays here every week on an aspect of language: common mistakes, new usages, how to write more effectively. Look at the pages About me and What I can do for you to learn more.