Losing the plot - what Peter Jackson did to The Hobbit

Well, I've done it. I've seen the third Hobbit movie, The Battle of The Five Armies. When I first heard there were going to be three films made of the slender children's book that prefaced Tolkien's Lord of the Rings trilogy, I knew they wouldn't be good. It was clearly a commercial decision not an aesthetic or literary one.

I read the book only once or twice as a child, after discovering LoTR, as opposed to re-reading the trilogy every year till I was eighteen and was forced to realise that the writing wasn't as good as the world-building and plot.

The Hobbit first came out in 1937 and I have the 50th anniversary edition with this cover: 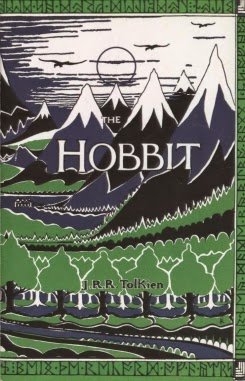 The strongest memory I have of the book is not from my childhood, however, but from the middle daughter's. We were started on my reading it to her when she was admitted, aged seven, to hospital with appendicitis. Between A & E and a surgeon and operating theatre becoming available, we were in a room in a children's ward and she was in pain but also hungry and it was strictly a Nil by Mouth situation.

So I read to her from The Hobbit, bowdlerising for food as I went along; it was very hard. Passages like this:

"At last Gandalf pushed away his plate and jug - he had eaten two whole loaves (with masses of butter and honey and clotted cream) and drank at least a quart of mead."

That would have been cruel to a little girl suffering two kinds of tummy pangs. (We had reached the house of Beorn, you will realise).

I have, of course, read it since then, middlest daughter now being a grown up woman with a husband and baby. The last time was probably after seeing the first Hobbit movie. Then I was struck by how - although clearly a book for children, with a very simple plot - there was a very dull coda after the big battle at the end which seemed to be a rather bureaucratic division of the spoils. All the action, quest and adventure just dissolved.

We were as a family very charmed by Peter Jackson's vision of Tolkien's world and looked forward to seeing each LoTR film each Christmas. Maybe that's why husband and self, without the rest of the family continued to make the pilgrimage to Cineworld every December: we wanted to revisit that  transformation of New Zealand that is Middle Earth. 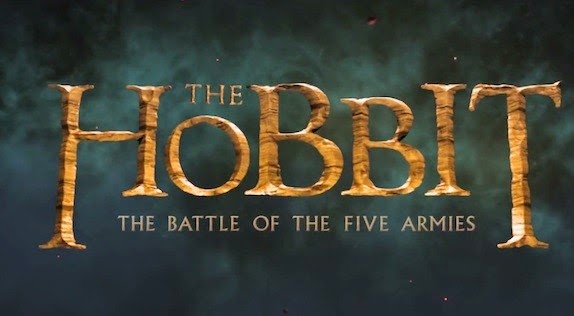 In order to stretch the story over three movies, extraneous bits of plot had to be added. Specifically the spurious love affair between a female elf and a male dwarf.

It felt fake from the beginning, with an older, fatter Legolas (Orlando Bloom) appearing as Kili's rival and a whole extraneous sub-plot about Legolas' father, Thranduil (Lee Pace), who appeared younger and sexier than his own son in a Jason-Isaacs-as-Lucius-Malfoy sort of way.

And clearly we are supposed to care about this love-match with the tension, and music, being ratcheted up for Kili's death and Tauriel's grief (Sorry- Spolier!). But I couldn't have cared less. (Kili and his brother Fili do die in the book but their deaths are dismissed in a sentence; they fell defending their kinsman Thorin Oakenshield).

It is quite clear that the writers understood that their source material would not uphold three movies so they grafted on what they thought would make it justifiable but it shows in every phrase of the clunky script. 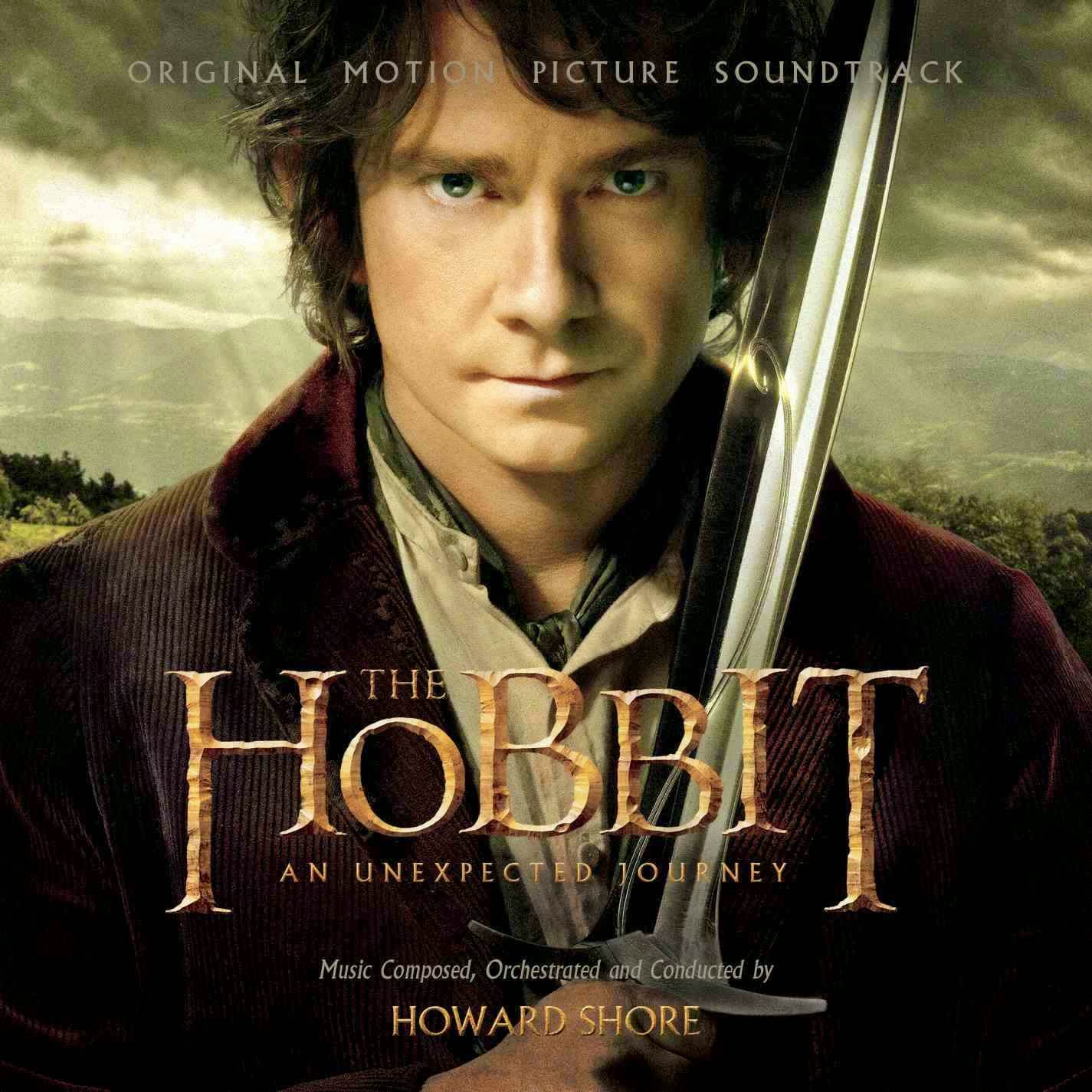 Things that did work:

Smaug. Forget the voice of Benedict Cumberbatch, though that didn't hinder. Any decent director with the Weta Workshop at his disposal could and should create a convincing dragon and his hoard and Peter Jackson did not disappoint. The problem was we got one eye opening at the very end of the first part: An Unexpected Journey and the devastation of Lake Town all over before the credits in The Battle of the Five Armies. So only in the middle movie, The Desolation of Smaug, was the dragon used to full effect.

Bard the Bowman. Played by Luke Evans, Bard was the only credible human, caring for his motherless children and generally being an all-round good egg, Dragon-Slayer and effective leader after the destruction of Lake-Town.

Thorin's dragon-sickness. It was a bit repetitive and tedious but nevertheless convincing that Thorin (played by Richard Armitage) lost any moral centre in the lust for treasure and the recovery of the Arkenstone.

Martin Freeman as the Hobbit. But woefully, woefully underused!

All the Dol Guldur stuff apart from  Radaghast (Sylvester McCoy) and his bunny sleigh. It was nice to see Elrond again (Hugo Weaving).

Things that did not:

Turning the Goblins into Orcs and having a whole sub-plot that repeated stuff in LoTR.

Casting hunky TALL males as dwarves. And leaving the hunkier without prosthetic noses and other bulbous facial characteristics.

Forgetting what happened to the Arkenstone, in spite of its importance to Thorin and the main plot.

Repeatedly omitting the arrival of the Second Orc Army[sic] in spite of the many threats that it was coming.

In fact who were the Five Armies? In the book it's men, elves, dwarves, goblins and the "Wild Wolves." In the film it's dwarves, elves, men and orcs. Said orcs do ride Wargs, it's true but the numbers just don't add up.

And to cap it all a sudden and previously unsuspected flock of SuperGoats appear to transport Thorin and other dwarves up to the rocky prominence where the Orc-ish creature with a blade for an arm awaits them. The goats then vanish.

It's Star Wars all over again: the second trilogy (which comes first chronologically) had better CGI and effects but lost the magic of parts lV, V and Vl.

In the Hobbit movies if the returning Sauron had been that strong and mustered those forces, the LoTR trilogy would never have happened.

Why did no-one have the courage to tell Peter Jackson he was making three Christmas turkeys, even if they turn out to be high-grossing seasonal fowl? It's all in the story and the script, Peter. You knew that once. What happened? Did success make you unable to know when you were repeating yourself (piles of dead elves, battles with rocks being hurled by trolls, seeming dead person under ice opening eyes etc. etc).

It is just possible that someone who hadn't read the book might have enjoyed these films on their own terms. But no-one surely could have defended them as good? If you did, please comment.

I am a great Tolkien fan and I enjoyed this very much. I agree that perhaps a trilogy was a bit much for such a slim volume, but it gave us three Boxing Days to look forward to. ;-) I am no great fan of the Dwarf/Elf romance, which I thought silly, but what the heck! The novel has no female characters at all - none! And you can't do that in a movie. You just can't. Yes, I know, Elrond's mother-in-law was in the movies. But Galadriel is so powerful, you just can't empathise with her. And she didn't get to do much anyway until this film, where you became very glad she later didn't accept the Ring when Frodo offered it.

Possibly it was a mistake to include all those characters from LOTR - of all the supporting characters only Gandalf and Elrond were in The Hobbit. But fans were expecting it and after all, Legolas would have been there when his father imprisoned the Dwarves.

The Thranduil in this version is the Thranduil of The Silmarillion, not the Elvenking of The Hobbit, who is mostly benign, except towards Dwarves, and Tolkien does mention a quarrel over a necklace not paid for, but dismisses it in a sentence or two, though it was a huge thing in The Silmarillion, where, I vaguely recall, the necklace had one of the Silmarils in it, gems which had caused a lot of trouble.

In other words, the film trilogy was aimed at Tolkien fans, not at children, though children could watch it. Unfair, but there you are.

I've posted about this too if you'd like to drop by my blog, The Great Raven.

I was thrilled when I heard he was doing The Hobbit, but my heart sank when I heard it would be three movies. I'm almost grateful he didn't turn it into four - you know, "Battle of the Five Armies - Parts 1 and 2". I enjoyed them (though the second suffered from middle-movie syndrome), and I especially enjoyed the last despite my bum almost losing all sensation with the length of it.

I quite liked Fili and Kili getting more than a sentence in their deaths, but Lord, was it too long. The whole trilogy was too long. It felt so self-indulgent. Jackson's a victim of his own success. If he even mentions The Silmarillion in passing, I'll slit my wrists.

Some of my favourites have "middle film syndrome" - The Empires Strikes Back and the Two Towers, for example. But the middle one of these had as its saving grace only the most dragon.

I haven't seem any of the Hobbit films, Mary... after really loving the LOTR films, I didn't want to spoil the magic by going back to the beginning!

But I had a similar experience with the 3rd Hunger Games movie - Mockingjay part 1. That does follow book quite closely and at least nobody tried adding a subplot, but it suffers from being slo-o-ow and not feeling finished. I left the cinema deciding I wouldn't to bother going to see the second part when it comes out, I might just re-read the book instead.

aren't the five armies in both film and novel dwarves, elves, men and orcs and EAGLES, though?
It's been about two years since I've read the novel, but that's what I remember and also what my friends, better acquainted with Middle Earth, have confirmed.

I have just watched the first part “The Hobbit: An unexpected journey.” I really liked the movie but I didn’t build up any interest to watch it further. Maybe because it felt way too fake, but then I am a potter had, so I stand no chance of saying this. Many of my friends who are UK dissertation writers are huge fans of the hobbit. Idk why I don’t like it that much!!