Five Children on the Western Front 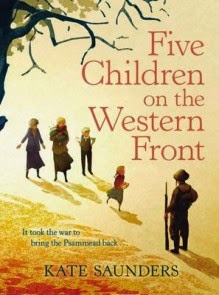 There comes a point in many writers' lives when they want to write a sequel to E. Nesbit's Five Children and It.* Helen Cresswell did it in 1992 with The Return of the Psammead; Jacqueline Wilson twenty years later with Four Children and It.

I passionately wanted to write Five Grandchildren and It in the 1980s but couldn't get anyone to take it. So I was ambivalent when Helen Cresswell got that gig, even though I admire her enormously.

And now, topically, Kate Saunders has taken the story into the First World War. We had of course spotted the same thing: that "two of E. Nesbit's fictional boys were of exactly the right ages to end up being killed in the trenches," as she says in her Afterword.

Reading and writing with the dubious benefit of hindsight, it is impossible to ignore the history of the early part of the last century and not to make that connection. The first book to feature the Psammead - the grumpy but magical sand fairy who can grant wishes - was published in 1902 and the last in 1905, so Nesbit can't have known how we would view the probable fate of some of her characters.

In Kate Saunders' book, the five children have been joined by a sixth - if the title were accurately to reflect the plot it would have to be Six Children, Some of whom go to the Western Front. The original five children - Cyril, Anthea, Robert, Jane and the baby boy known as the Lamb - now have a younger sister called Edie (in a nice nod to the original creator of the Psammead).

It is a brilliant solution to wanting to make Cyril and Robert old enough to fight while still having a child young enough in the story to champion the sand fairy in much the way that Jane did in the original.

Cyril, known as "Squirrel" is now twenty-one and a Lieutenant in the army, Anthea ("Panther") is twenty and at Art School, Robert is eighteen and at Cambridge, Jane a sixteen-year-old strong-willed schoolgirl, the Lamb is eleven and the new girl, Edie is nine.

They are gathered at the house in Kent for a farewell lunch for Cyril, who is off to the war; it is the autumn of 1914, when Edie and the Lamb (he does not want to answer to his given name, Hilary) find the Psammead back in the gravel pit where he first revealed himself to the children.

He can't grant wishes any more: that was a given at the end of Nesbit's first book about him. But he does still inspire exciting and awkward adventures. Kate Saunders captures perfectly the practical details of looking after and carrying around someone that has to be kept dry at all times, is heavy, and mustn't be seen by anyone not already in the know.

The Psammead is trying to get back to his own time and place but seems to be under a curse preventing him from making any headway. And somewhere along the way he has mutated  from a fairy to a despotic god whose exile has been brought about by his own wicked behaviour.

He has to learn remorse and to seek forgiveness from his victims, a learning curve he reluctantly embarks on against the backdrop of tragedy and loss that the time provides.

Kate Saunders doesn't shirk the implications of the date and some will find the ending unbearable. But, on this day of Remembrance, I'm glad she wrote it this way. I would have too.


*Of course Nesbit did it first with The Phoenix and the Carpet and The Story of the Amulet.
Posted by Mary Hoffman at 00:01 2 comments:

Email ThisBlogThis!Share to TwitterShare to FacebookShare to Pinterest
Labels: Edith Nesbit., Five Children on the Western Front, Fve Children and It, Kate Saunders, Mary Hoffman, Psammead
Newer Posts Older Posts Home
Subscribe to: Posts (Atom)
I am your Grammar Grandma - think of me as your Fairy Godmother for Language. I'll be writing mini-essays here every week on an aspect of language: common mistakes, new usages, how to write more effectively. Look at the pages About me and What I can do for you to learn more.