Friendship and Fresco-bombing in Florence

I had only a week at home before setting of to Italy again, this time to possibly my favourite city: Florence. I have been visiting this treasure-house of art and much else since my first summer holiday from university. It was love at almost first sight and since that formative occasion I have been back more times than I can count - well over thirty, including two separate months when I have lived there.

Last year I was actually paid to do it when Julie Foster Hedlund invited me to teach on her first ever Writer's Renaissance - a creative writing course focussing on sense of place and using all the senses. WR includes field trips, hands-on writing tasks and many wonderful meals and visits to the city's gelaterie. So I jumped at the chance to do it again this year, especially as this year I had the chance to stay first with my old Florentine friend.

My first three nights were in an apartment in the San Gervasio area of the city, spending the day sight-seeing and researching my planned field trip during the day and joining my friend upstairs from late afternoon onwards for tea and then dinner.

My first day was spent divided between culture and shopping - the perfect mix. I went to the San Marco convent to check on my memories of the Fra Angelico frescoes in the upstairs cells and one in particular - the Noli me Tangere - which I have written about twice in novels. 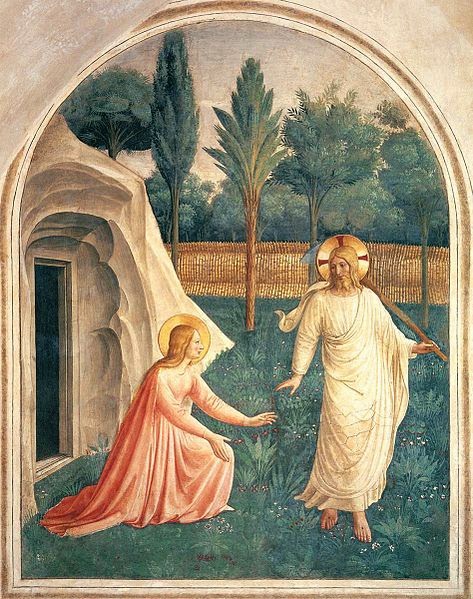 And then to the San Lorenzo market, where I had my once-every-two years commission to buy two pairs of Nicola Benson shoes for my husband from his favourite shop. The three men there all know me now! Then I hit the stalls, buying two pairs of gloves and a turquoise handbag for me and presents for other people.

I had arranged to meet Julie after lunch, who was also in the city early, making arrangements to welcome her students. The hotel which is the WR base is the stunning Antica Torre Tornabuoni, with its two roof terraces, so that was a rendezvous we both knew and had the added advantage that I could leave two heavy pairs of men's shoes there till I moved in on Monday.

After tea and a planning session, we went to watch marbled paper being made, which I shall write about over on The History Girls on 1st May.

I discovered there was going to be a half marathon run in Florence next day, so took the number 7 bus out to Fiesole instead of into the city. I'd hoped to see the newly excavated Etruscan road there but the way into it was locked on a Sunday and there was a beguiling flea-market all over the square on top of it.

So I just walked up to the monastery at the top, catching the wonderful view halfway. This was the day the WR students arrived but I didn't meet them till Monday, when I said goodbye to my friend after three evenings of intense discussion (in Italian) about children's books, and moved into Antica Torre Tornabuoni.

Julie and my fellow tutor Sarah Towle had been on a demanding walking tour relating to Dante with the students but we met up for lunch and more planning. Having been chilly all weekend, Florence had turned hot and sunny that day.

It wasn't till that evening that I met our students - three from the US and two from Australia - over aperitifs in the gazebo. We heard what Dante had inspired them to write, following some prompts from Julie, then walked to Del Porcellino, a restaurant just round the corner from the Mercato Nuovo where this much-photographed bronze of a wild boar gets its nose rubbed for luck by hundreds of hands every day. 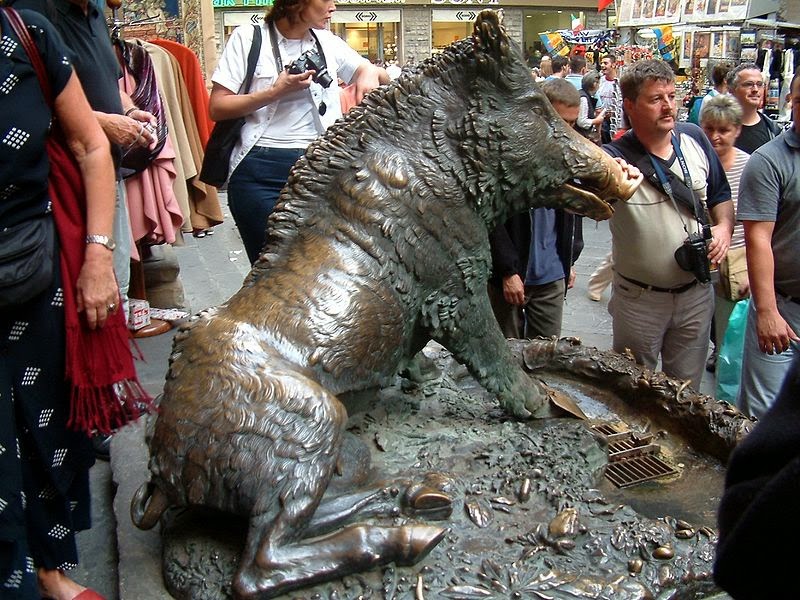 That's a bit of typical Florentine humour, by the way, to describe a massive wild boar as "the piglet." The original Roman statue is in the Uffizi.

By the end of a large meal and plenty of wine the group was beginning to gel. For all of them it was their first time in Florence and the stimulus was intense.

Tuesday was "Michelangelo Day," started off by Julie and continued by me. After a session in the gazebo, we set off to the Accademia to see David, about whom I have written a novel. As last year, searching questions were asked about the young man's anatomy and answered frankly by me, causing a scandal with one of the official guides. 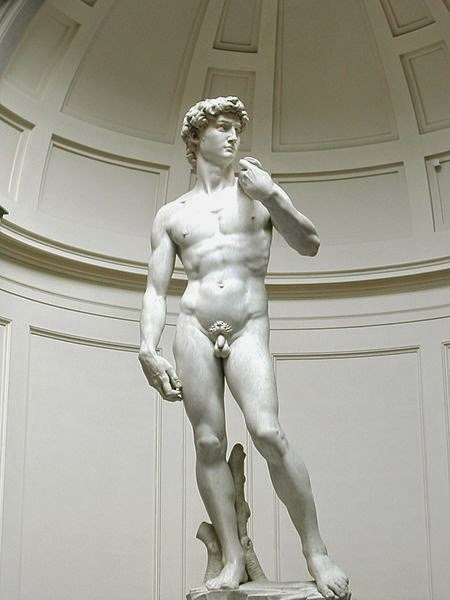 The afternoons are free so Sarah and I, who are hatching various writerly and publishing plots, together, went off the see the Medici chapels. Daunted by the long queue, we went for an early lunch + more plotting + caffeine, which had been sadly missing from the morning. By the time we were done, there was no queue and we had the place to ourselves. Alas the public are no longer allowed to get into the "secret room" where Michelangelo hid under the New Sacristy during a visit to the city when the de' Medici had been restored to power, but we saw where it was and watched a DVD showing the drawings he made on the plaster while in hiding.

Wednesday was "my" day, when I got to take the WR students on a field trip. I had chosen San Marco partly because of having written about it in two different ways and partly because it is one of my favourite places in the city. But you never know how it will strike someone seeing it for the first time. (Last year I took the first group of students to see the Masaccios in the Brancacci Chapel).

I needn't have worried:they were all blown away. First by the massive Annunciation at the top of the stairs and then by the cell paintings, especially my favourite Noli me Tangere. Gradually they realised that St. Dominic the founder of the Order at San Marco, whose adherents included Savonarola and Michelangelo's older brother as well as Fra Angelico, found his way into almost every painting. 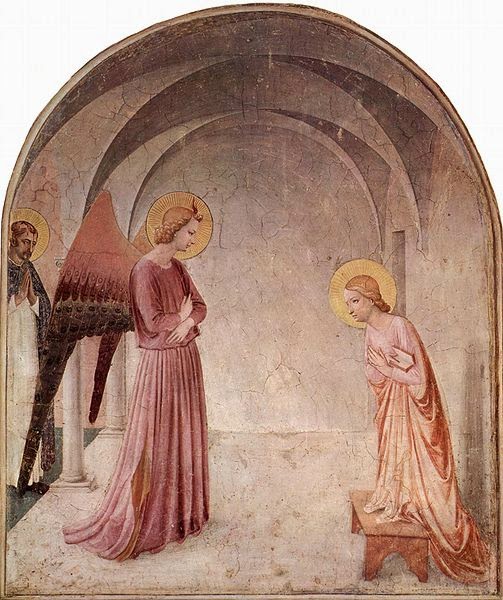 Here is another version of the Annunciation from one of the cells and you can see that the Saint has "fresco-bombed" the subject.

We left the students there - some stayed till lunch - while Julie and I went for a much-needed caffeine + gelato hit. We all re-grouped for lunch at Nuti's and then I introduced one student to the joys of the market, where she bought three handbags ( her score by the end of her trip reached eight!).

And then it was already the last night and our "Faculty dinner" which Julie, Sarah and I had at I Quattro Leoni. It was another enriching experience for all concerned and, as last year, will take a long time before all the experiences are fully absorbed and re-emerge in the students' writing.

I have already been invited back to teach next year; just let anyone try to stop me.

Perfetto Mary! Also, it could hardly be considered a trip to Florence if one of us wasn't causing a scandal! :-) Alla Prossima Volta!!

And this time we both managed it!

Truly a magical trip! I look forward to more "plotting" with you, Mary, as well as touring and gelato eating with a bunch of perspective-taking thrown in. So delighted that Julie invited me to join you as faculty this year!

Grazie Mille to you both!