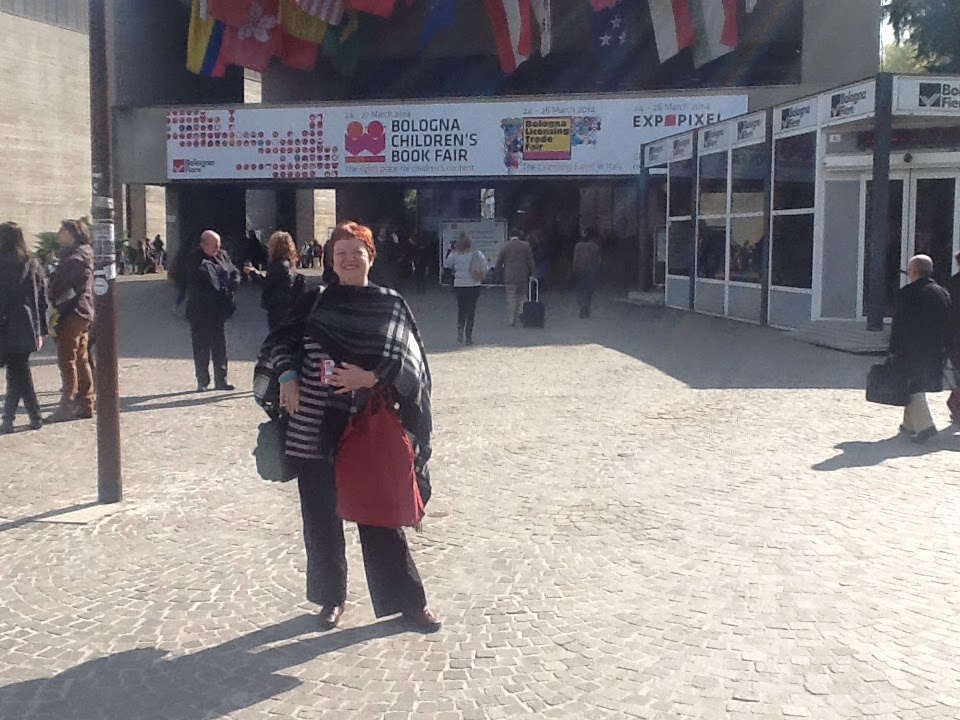 Disgracefully late, I am bringing you my account of this year's Bologna Book Fair. I was reporting for Book Brunch and Armadillo, which kept me taking notes fairly busily and only a week after getting back had to fly to Florence (I know, I know) for another teaching gig. I will try to write that up later for you.

It was a very sociable Bologna for me since I travelled not only with Lucy Coats, for the third year in a row but also my daughter, Rhiannon Lassiter, who last came with me in 2011, and this year's "Fair Virgin," Frances Hardinge.

As well as all the agents and publishers (no authors) we found at Heathrow, we bumped into old friend Lawrence Schimel on the bus from Bologna Airport to our hotel. Rhiannon and I first met Lawrence at Bologna in 2003 when we were compiling our fastest ever book, the anthology Lines in the Sand (Frances Lincoln 2003). We included one of his terrifying, excellent poems looking at the Shoah through a fairytale lens; that was his Hansel and Gretel, with a very different kind of oven at the end. Now he has published a small volume of poems called Fairy Tales for Writers, which he gave us:

Like the prince supplicating
from the base of the tower for Rapunzel
to let down her hair, the editor calls her
to ask for the rest of the manuscript.

After a quick dip into the exhilarating social melee of the Random House party - full of prosecco and agents - the four of us went to our "usual" restaurant, the Trattoria del Rosso, and braced ourselves for day one of the Fair.

As I've often said, it's the serendipitous encounters in the aisles that make the Fair, as much as the appointments with agents, Rights managers and editors. One of our first was with David Fickling, newly independent and without his own stand. He told us about so many new books coming out - including Jon Walter's refugee story, Close to the Wind, Sarah MacIntyre's Jampires and the delicious-sounding Bumps and Babies anthology - that it's hard to remember that DFB is such a small operation. "We're not having a launch, just carrying on producing the best books," says David, buoyant as ever.

A highlight of the day was the launch of Sarah Towle's Time Traveler Tours and Tales at the SCBWI stand. (= Society of Children's Book Writers and Illustrators but that's such a  mouthful, everyone calls it Scoobie!).

Sarah, who is producing collaborative narrative non-fiction, says "there's a format for every user and for every time of day," from smartphone Apps to iBooks on tablets to paper books and Curriculum Guides for teachers. She was way ahead of her time producing Beware Madame la Guillotine as an App in 2012 1nd is still a pioneer in introducing Digital Technology into Education programmes.

After exploring our way round the Fair, all four of us went to different dinners. Mine was with my Italian publishers, Lo Stampatello, two women called Maria Silvia and Francesca. They have published The Great Big Book of Families and The Great Big Book of Feelings already and this autumn will bring out Welcome to the Family, all illustrated by the marvellous Ros Asquith and published here by Frances Lincoln. 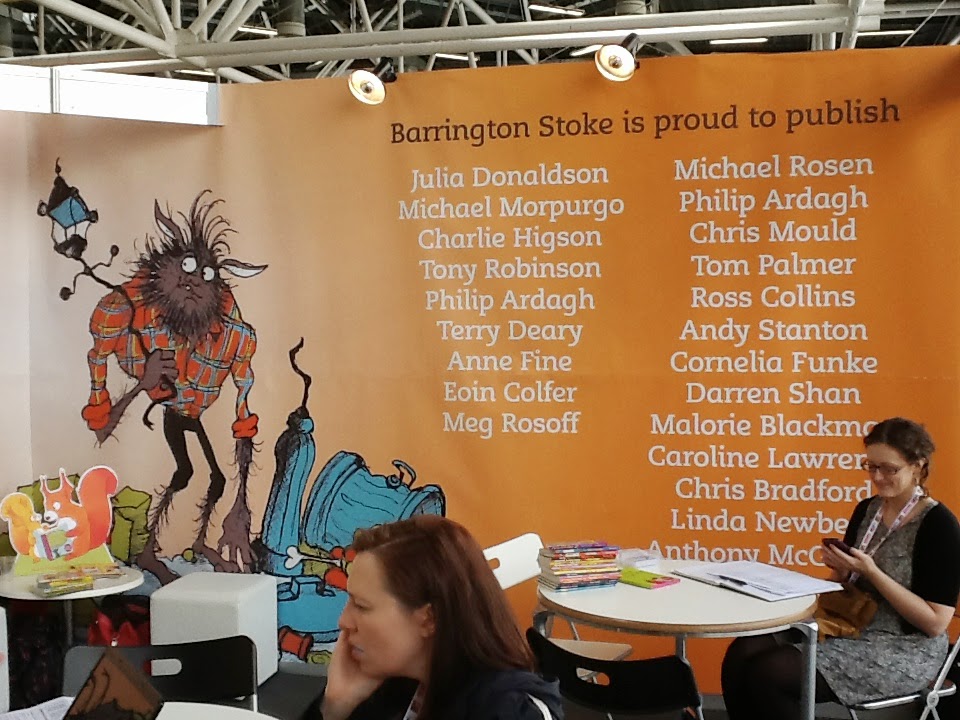 I had a double reason to visit Barrington Stoke next day, since I have two books coming out with them this summer and I also always want to know what they have coming out. In this case new titles by Charlie Higson, Mike Rosen, Cornelia Funke, Eoin Colfer and Alexander McCall Smith - quite a roll call! And it doesn't end there: Sally Nicholls, Caroline Lawrence, David Almond, Lee Weatherly and Mary Hooper have all been writing for their 8-12 list.

After a lunch with Janetta Otter-Barry and new MD David Inman of Frances Lincoln, the first part of the afternoon was spent visiting agents, such as Jodie Hodges of United Agents, Fiona Kenshole of Transatlantic (Canada) and Jo Unwin, who is currently working in association with Rogers, Coleridge and White.

Jodie's clients Laura Dockrill and Emma Carroll are doing really well, with their Darcy Burdock titles and The Girl who Walked on Air. Fiona, who used to work for many British publishers, is now based in the US, working for a Canadian agency, with clients in Hong Kong and Mumbai - a very modern set-up.

Jo Unwin, who has returned to agenting after a brief foray into editing for Random House, was presenting Claire Wilson's list while Claire was on maternity leave. She told me that Half Bad - last year's "Book of the Fair" - had made the Guinness Book of Records as the fastest-selling rights for a début author, whether for adults or children.

My last stand visit of the day, before the Barrington Stoke Prosecco party, was to HarperCollins. There had been an announcement the day before that their star illustrator Oliver Jeffers was going to collaborate with Eoin Colfer on a picture book called Imaginary Fred. Jeffers was actually on the stand; they had been taking him out to dinner with his foreign publishers the night before, to celebrate the tenth anniversary of his first book with them.

Jeffers is also producing a book called Once Upon an Alphabet, with a short story for every letter. Other titles to look forward to are Rob Biddulph's début, Blown Away, about the unexpected journey of a stylised - and stylish - penguin and new books from Judith Kerr and Emma Chichester Clark.

During the day it had been announced that Quercus had been sold to Hodder so it was going to be interesting meeting Roisin Heycock and Emma Thawley for drinks that night. Although Quercus had been up for sale for some time Roisin as publisher and Emma as Rights Director have not let the grass grow under their feet. They had been giving out red tote bags at the stand celebrating ten years of Quercus books and were enthusiastic about two new books: Anna McKerrow's YA novel Crow Moon, about a reluctant boy witch and Georgia Pritchett's funny Middle Grade title, The Big Kerfuffle. 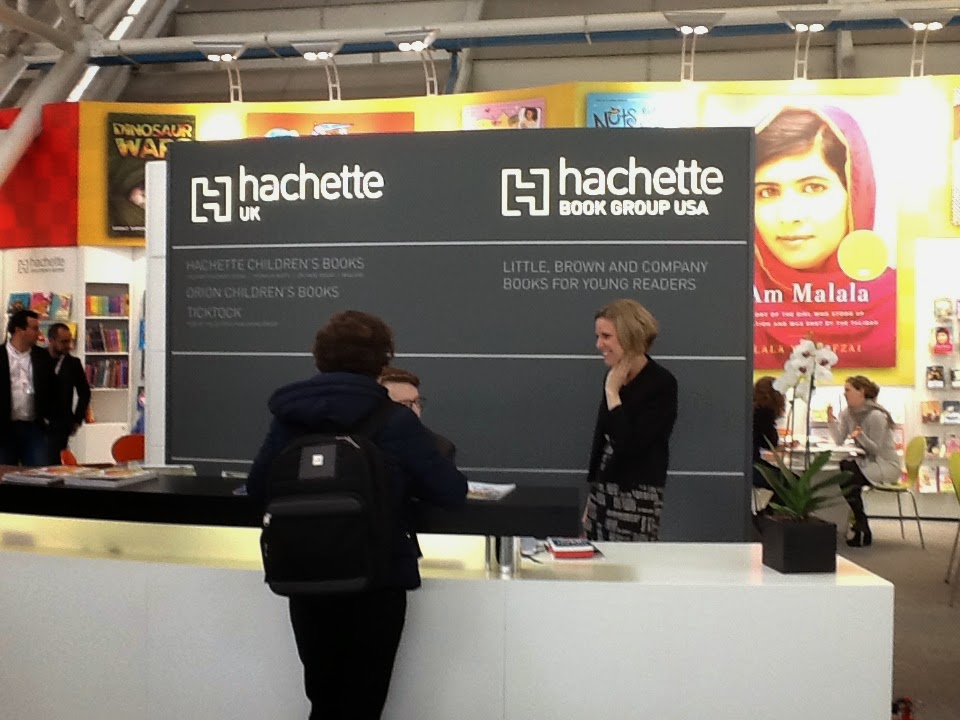 And so we had reached the last day (for us) of the Fair, with only the morning before lunch and the journey back to the airport. For me, it began with meeting Nirmal Sandhu, the Rights Director at Hachette, who showed me my favourite picture book of the Fair: The Queen's Hat by Steve Antony, a beautifully designed and executed tale of a flyaway titfer chased by lovely, stylised multiple guardsmen!

Clare Somerville, the Deputy Managing Director, joined us to talk about Orchard's the World of Norm series by Jonathan Meres, a good example of the funny Middle Grade series titles that - since Jeff Kinney's wildly successful Diary of a Wimpy Kid - is pure Rights gold.

There are quieter books coming too like Heartsong, an Orchard collaboration between Kevin Crossley-Holland and Jane Ray telling the story of one of Viva;di's orphans, and The Colour Thief by Andrew Fusek Peters and Karin Littlewood, about a parent's depression.

Then it was off to Hot Key for coffee from the integral café on their stand and a meeting with Kate Manning, their Rights director. We talked about a book with possibly the most stunning cover at the Fair, the novel Boy with a Tiger's Heart by Linda Coggin. Kate doesn't think Fantasy is over, as so many pundits were trying to convince us. They have just published Trubute by Ellen Renner, the first in a series about Mages and Knowledge Seekers, which is pure traditional fantasy material.

Frances Lincoln has a very strong and varied autumn list and I don't just say that because I had a book on it! Elizabeth Hammill's Over the Hills and Far Away is a collection of nursery rhymes from round the world, with seventy-seven equally international illustrators. All royalties go to Seven Stories in Newcastle, which Hammill helped to found.

I loved Wendy Meddour's How the Library (not the Prince) Saved Rapunzel, a "fractured" fairy tale. The heroine's rampant locks portrayed by new illustrator Rebecca Ashdown are a bit reminiscent of Wendy's own impressive curls.

And so to my last meeting, with scout JohnMcLay, who thought that there had been a resurgence of Middle Grade fictuon in the UK, all in the area of humour or magic and invention. "Up till now we've been a net importer of US Middle Grade books but now we are producing more of our own." UK YA has also struggled to find overseas publishers but the many creative writing programmes, such as those at Birkbeck, UEA and Bath were producing some fine writers.

A book John had particularly liked at the Fair was The Tapper Twins go to War by Geoff Rodkey, which Little Brown was selling strongly in several territories. He had identified a few "mini-trends" - books about suicide, like Jennifer Niven's The Bright Places being published by Random House US - had had been pitched at least four.

Witches are still strong both in YA and Middle Grade but also realistic stories about illness and car crashes, "love stories with obstacles."  He told us about Endgame by James Frey, which is a bit like Kit Williams' Masquerade. But this time it's a multimedia event with film rights bought by Fox and a book series with HarperCollins, not to mention videos on YouTube.

And so home to recover, to write up my articles in bed with a streaming cold, not helped by the recycled air in the plane. A good solid Fair, not as hectic as some but I came away with the feeing that children's books in the UK were doing OK

NB: I have no report on the London Book Fair this year, because they changed the date and it clashed with my teaching commitment in Florence. I hope this won't happen in 2015.

Those inflatables aren't Moomins! They're Barbamama and Barbapapa and family.

I was going to say the same thing, Polly.

But a wonderful round-up, and very thorough - thank you, Mary!

Is that right? I will rectify.

2018 Bologna Children’s Book Fair will be held from 26th to 29th March as a four-day event in Bologna, Italy. Bologna Book Fair is a highly regarded event, popular for showcasing products and services related to the field of digital media, publishing, and licensing, along with discovering new market trends in children’s book industry. Not only this, but the important authors and illustrators in children and young adults book industry, also participate in this prestigious event.