Close your Pretty Eyes by Sally Nicholls - a review

When Jane Austen said she had written a heroine that no-one but herself would much like, she meant not Fanny Price, as I had misremembered, but Emma Woodhouse. I thought about this assessment when I read Sally Nicholls' Close Your Pretty Eyes, because she has taken the bold step of creating a protagonist-narrator who practically begs you not to like her. 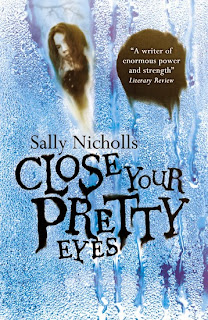 Olivia has lived in sixteen homes since the age of five and she warns you that she is a monster and a witch and that her mother doesn't love her on the first page of the book. On the next page she admits that she tells lies: Olivia is the very definition of an unreliable narrator.

She tells her history in reverse - like Stuart, a Life backwards - starting with the new foster home she has at age eleven, with Jim Ivey and his family and working back to her birth mother who didn't love her. And the Iveys will not be her last home even within the book.

Olivia is the foster child from hell: she puts each new placement to the test by behaving as badly as she possibly can, as if forcing each foster parent (and one children's home) to fulfill her belief that she is unlovable and chuck her out.

But she has had some placements from hell too, from the terrifying abusive Violet to the bland "mummy and daddy" who adopted Olivia's younger sister Hayley but didn't want Olivia herself. There are some blood-curdling stories here, all of which combine to confirm Olivia's belief that "something went wrong when I was born."

It looks as if she might have a chance with Jim Ivey, who has custody of his own two children, Daniel and Harriet, and already fosters a teenager with a baby. They live in an old farmhouse, low and long, and Olivia soon finds out that it used to be home to a notorious criminal.

Amelia Dyer was a Victorian baby farmer, convicted and hanged for the murder of hundreds of her charges - and Olivia can see her. She can hear babies crying too and confuses the sound with the crying of Maisy, the fostered teenager's baby. Gradually the ghost of Amelia comes to dominate Olivia's life at the Iveys and leads her to do the worse thing yet in a foster placement.


If you thought Tracy Beaker was pushing the boundaries, read Close Your Pretty Eyes. The reader's heart breaks to see Olivia deliberately destroying every chance of a loving family life, time after time, because she just can't believe that anyone really wants her.

I found the ghost story almost an irrelevance. Olivia's story would have pulled me in just on its own without the supernatural element. But it is nevertheless terrifying.

And the ending, when Olivia is in her sixteenth home and writes to Jim Ivey asking him to forgive her and take her back, is magnificent. I won't spoil what Sally Nicholls does with it. In the five years since she won the Waterstones' Prize with her début, Ways to Live Forever, Saly nicholls has continued to surprise and enthrall.

(The photos are by Carolyn Hunter)
Posted by Mary Hoffman at 16:14

I'm halfway through this and it's v good!

I have just finished this book, I do so feel for Olivia, i kept wishing her to do the right thing, and not push boundaries, and keep alienating herself. This reinforces the difficult issue about "problem" children in the school where I work,. No bad children, just bad actions and

I love the way that Olivia could disassociate with the horrid things that happened to her, super powers, she called them, though Liz explained the real reasons. Other terribly abused children suffer the same, and have multi-personalities to cope. Sybil, was a true story of an extreme case.

I really enjoyed reading the book, and will need to fully digest it before picking up my next read! I also want to find out more about Amelia Dyer' s story. Very sinister!

gan good job, this article is very interesting to note, cool deh,, of course we have new insights that we get after reading it, thanx yah :-)
obat penghancur tumor di payudara tradisional

Your awesome topic is yours. I like these topics very much. I would like to have such topics daily, this post is really good for you. There are people like you in the world who put their views in front of everyone. Thank you from the heart.
Real Girl Number Gurugram
Real Photos Girl Gurugram
Gurugram Girl Number
Hyderabad Party Girl
College Girl Gurugram
VIP girl mahipalpur
college girl aerocity
Low rate Girls sushant lok
Queen of Golf course road