My very own little witch

Once upon a time I had a little girl who loved stories. (And then I had two more but this post is not about them, even though daughter number two was due on Hallowe'en).

And we had a dressing up box - a wooden one - that now resides in the first daughter's grown up living room. For one of the many things they had in common with their mother was a love of dressing up and pretending to be someone else. Once they went as rabbits to a summer party in black leotards with cotton wool ball scuts and carrots hanging round their necks on strings. (There might have been some attempt at ears too).

Another time we were all invited to a Walker books Hallowe'en party and everyone dressed up. I seem to recall my long-suffering husband going as Count Dracula in a black velvet cloak and plastic fangs. Rhiannon Lassiter - for it is she - went as a witch and won a prize.

Clearly this was a formative experience.

It's lovely for a writer to have another writer in the family; it makes for quite different conversations. About characters and plots and incidents. And we get to read each other's books before they are published, which is a big bonus. 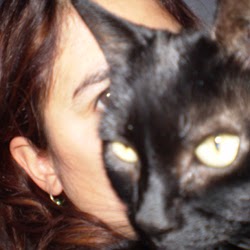 One of the many qualifications Rhiannon has for performing magic, as well as her name, is the possession of an all black cat. Here they both are, above. So it will be no surprise that the Little Witches of her first e-book also acquire a familiar of this traditional form. Only in his case he is sometimes a boy.

But I am getting ahead of myself. There are five stories in Little Witches: Bewitched, with the promise of more to come. The first story, Little Witches and the Trick-or-Treat Trick, tells how Verity and Dulcie both become genuine witches after a trick-or-treating outing, a dodgy shopkeeper in Camden and some delicious emerald green sweets. It's Hallowe'en - the one night when children can accept sweets from strangers.

Verity and Dulcie meet, with their sisters and au pair respectively, on the same doorstep; both are dressed as witches and they become instant friends.  In the second story, Little Witches and the Wandering Shop, when the spells of the old woman with the green sweets have become rather inconvenient in the way they do in E. Nesbit's Five Children and It, the girls try to find again the shop where it all went wrong, only to find it is no longer there.

Their further adventures have them capturing a ghost in Dulcie's grandfather's very grand stately home, acquiring the cat that is sometimes a boy and travelling back in time to meet a very famous playwright and a surprising third witch.

It's a charming read , full of vivid characters, like Dulcie's Eastern European au pair, the ghost of Audley - a sixteenth century boy murdered by a family member - and Tom, the cat-boy, whose hobbies are stealing things and fish. (The description of his corrugated iron shack and its contents reminded me of Diana Wynne Jones).

The book is available for kindle at the normal price of £5 but, just for Hallowe'en  you can snap it up at the bargain price of just £1.53.That's 70% off the usual price.

And is it nepotism to write about it here and tell you how brlliant it is? Of course. But I really had no choice. You see my daughter put me under a powerful spell.

This post is so lovely, it makes me fell all soppy inside. That black cat is sitting on my lap right now, putting me under her own powerful spell.

This made me feel all 'awwwwww aren't you both lovely' as well.