In honour and memory of Elmore Lenard, who died a couple of days ago, I am re-printing two posts from 2010:

Well it was bound to provoke, wasn't it? Last Saturday's Guardian newspaper printed Elmore Leonard's already well known 10 rules and asked many other writers to provide their own, here: http://www.guardian.co.uk/books/2010/feb/20/ten-rules-for-writing-fiction-part-one

I've come across the Leonard rules before so don't understand how come they are just being released as a book here. And I can't honestly be bothered to find out why. I hate writing rules!

If they worked, then everyone who followed them would produce similarly successful books, wouldn't they?

Here are a few taken at random:

Margeret Atwood - take 2 pencils so you can write on a plane because "pens leak" - honestly, I ask you! Did she get to be the great writer she is by eschewing biros? I don't think so.

Roddy Doyle - do not search amazon.co.uk for the book you haven't written yet. Is the man mad?

Richard Ford - don't have children. Back to the old Enemies of Promise premise, I see. How many male writers look after their own children?

P. D. James Increase your word power. This from a woman who misuses "fortuitous" in almost every novel.

Dip in almost anywhere and you will find such dross - this really is just filling column inches.

Tips, I can take. I've written some myself on www.maryhoffman.co.uk because so many teenage writers asked for them and it saves repeating myself (I think I have 10 rules for writing fantasy there but done tongue in cheek - do not let your plot hinge on a birthmark, for example)

Hints are good. I love hearing about the way writers work. I loved it when the Guardian ran those pictures and descriptions of writers' rooms.

Advice? Good when asked for and given by someone one respects.

10 things that help me write

I've gone on thinking about those rules and think they would have been more useful if expressed as above. Here are mine:

1. Someone to read fiction aloud to, chapter by chapter, as I write it. In my case it's my husband, so he is very close at hand but any trusted friend would do.

2. Proximity to a kettle. My study is next to the kitchen, so it's very easy to make a mug of real black coffee in the morning and tea in the afternoon (creature of habit)

3. An object that symbolises what I am writing about. It's not a fetish but a focus. Currently I'm writing a novel about Michelangelo's David and I don't have such an object. Must find one.

4. A supply of clicky-clicky biros that write black. Blue really disturbs me.I like Papermate flexigrip which I buy in sixes (though then they all run out at the same time)

6. A writers' group. I belong to "the other SAS" = Scattered Authors Society. We have a closed forum on which to let off steam, pass on news, give and receive sympathy for personal sadness, ask for and receive advice on many arcane topics. We also meet at least twice a year, some of us, and also have little local lunches from time to time. We never discuss ideas or "inspiration", hardly ever even technical writing matters but it's terrific just to know a group of people who don't have to have this insane way of life explained to them.

7. A subscription to the London Library.

8. Some close writer friends, a smaller group than the SAS, with whom I can talk career strategies, marketing etc. You know who you are.

10. a regular supply of fiction both YA and adult, to read. I'm not at all afraid of "being influenced" as some tyro writers say. If you don't read you can't write. Oooh, I think no. 10 is actually a rule!
Posted by Mary Hoffman at 15:53 3 comments:

I was recently asked to compile a list of what I thought were the 20 best picture books for children. Then this changed to 20 best books for children, whatever the format or age group. Finally a list of the 50 best children's books ever was published in a national newspaper, put together from suggestions by a panel of children's writers not including your Maven, in spite of her having been asked and providing the list to meet the deadline.

So in the spirit of waste not, want not and let's all be Green and aware of the value of recycling, I am going to put my lists up here for discussion. First, the 20 best picture books, not ranked in order as I was asked to do by said national newspaper. And of course I can annotate my choices here because it's my blog.

I haven't chosen the obvious Where the Wild Things Are or The Very Hungry Caterpillar; you might find some of my choices equally obvious but there are also some rarities here. 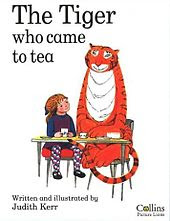 • The Tiger who came to Tea by Judith Kerr

This will probably be on most people's list of favourites. In this first of her many picture books, Judith Kerr introduces children perfectly to magical realism. Actually I take that back - they know about it already. A tiger who eats Sophie and her mother out of house and home is to be catered for in future by a large tin of "Tiger Food" but as we know, he never does return.

• Not now, Bernard by David McKee

A little boy tries to point out  to his parents that there is a monster in the garden who wants to eat him but they are just too busy to listen and the inevitable happens. Not for children of a nervous disposition but a salutary lesson for parents. 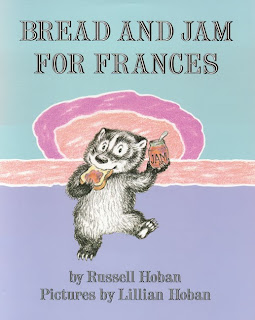 • Bread and Jam for Frances by Russell and Lilian Hoban

The whole series off Frances the Badger Books is divine but if I had to choose just one it would probably have to be this (this is worse than Desert Island Discs). Frances refuses to eat anything but bread and jam so in a cunning plan her parents stop offering her anything else. The humour is as dry as a martini.

I'm a huge Margaret Mahy fan and she will show up again in my list of 20 best YA novels. Evidently she had a lot of good fairies at her Christening since she wrote equally wonderful picture books, junior fiction, teenage novels and even an acceptable reading scheme. The dull little clerk whose large, boisterous mother shows him a life that is more fun at sea is one of our family favourites.

There are only four words in this fabulous book and you have now read them all. A perfect first picture book for a baby.

• Each, Peach, Pear, Plum by Janet and Allan Ahlberg

This is pretty darn perfect too. The last page: "I spy .....everyone!" gives the authentic backbone shiver. 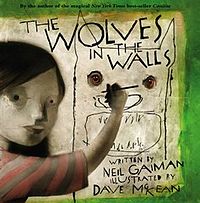 • The Wolves in the Wall by Neil Gaiman and Dave McKean

Plenty of shivers here too! The moment when then Wolves come out of the Walls as has been threatened throughout makes it the modern day heir to Not now, Bernard.

You could have any one of this fabulous series featuring the wonderful cast of dogs, including Schnitzel von Krumm (with the very low tum). The rhyme is as effortless as the sense of fun.

• My Cat Likes to Hide in Boxes by Eve Sutton

There are some fairly irresistible rhymes here too: "The cat from Norway got stuck in the doorway," for example.

• Once There were Giants by Penny Dale

Hardly anyone knows this but it's one of my favourite picture books, showing so economically and poignantly, how babies become the grown-ups to the next generation.

• Where's my Teddy? by Jez Allborough

I have often used this with students as an example of the perfect picture book text. 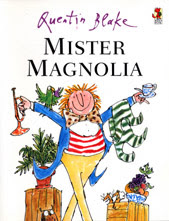 "Mister Magnolia has only one boot" - a situation that it takes the whole book to resolve, via the maddest list of all the things he does have that rhyme with boot. And then a parcel comes ....

When I first got into children's books, this book was the classic text.  It first came out in 1968 and is still in print. Absolutely minimal text charts Rosie the hen's apparently uneventful walk across a farmyard, while the stylish and stylised orange, red and black pictures tell a more complicated story.

• Meg and Mog by Helen Nicoll and Jan Pienkowski

Another very reliable series, with the wonderfully dotty Meg the witch and Mog her familiar.

• The Snowman by Raymond Briggs

Such a simple idea, like all the great classics.

This is one of four books that virtually no-one else knows about outside our family. Yet it has given us so many useful phrases: "heavy sticky" "cake beam" "tidying up the cheesecake" "slitherino squelcher." 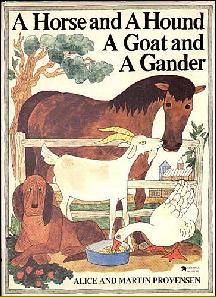 • A Horse and a Hound, a Goat and a Gander by Alice and Martin Provenson

More useful phrases - and names - here! The Gander was called Evil Murdoch and fell in love with hub caps.

I've sneaked another Judith Kerr title in here near the bottom so as not to seem greedy. This is the first of many Mog books by someone who really knows cats.

Nora decides, as so many "misunderstood" children do, to leave home. But no-one seems to notice. The last line is very satisfying. 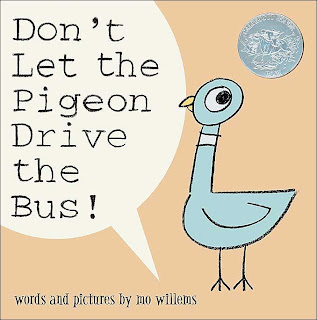 • Don't Let the Pigeon Drive the Bus by Mo Willems

A modern classic, where the ending is implied right there in the title. The kind of delicious inevitability that has children screaming with delight.

So how about all the ones I have left out? Give me your favourites below.

Email ThisBlogThis!Share to TwitterShare to FacebookShare to Pinterest
Labels: best picture books, Mary Hoffman, the Times
Newer Posts Older Posts Home
Subscribe to: Posts (Atom)
I am your Grammar Grandma - think of me as your Fairy Godmother for Language. I'll be writing mini-essays here every week on an aspect of language: common mistakes, new usages, how to write more effectively. Look at the pages About me and What I can do for you to learn more.