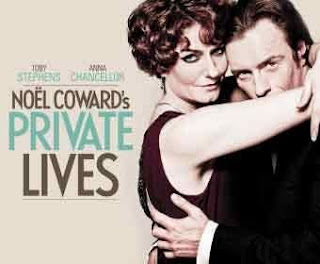 Opening Night at the Gielgud Theatre on Wednesday and your Maven was tirelessly there to see what a new production made of this 1930 classic. (Well, the audience has been described as "star-studded" but the reporter might possibly have meant Dominc West and Helena Bonham-Carter).

Noel Coward's hardy perennial opens with the most famous balcony scene since Romeo climbed up that creeper in Verona. Two honeymooning couples in Deauville have neighbouring bridal suites in a hotel with balconies overlooking the harbour and a yacht whose lights are reflected in the water. Out comes newlywed Sibyl to rhapsodise over the view, shortly followed by Elyot Chase, her new husband.

You get an extra frisson if you know that Toby Stephens, playing Elyot, actually is married to Anna-Louise Plowmam, playing Sibyl.  You can't help wondering what it does for their marriage to have Stephens yelling at her within minutes that he'd like to cut her head off with a meat-axe. Because Sibyl will keep talking about Elyot's first wife, Amanda.

When they go in to dress, it doesn't take long for the penny to drop that the "Mandy" the man on the next balcony calls out to admire the same view is that very Amanda. That Victor Prynne (Anthony Calf) completely misunderstands his new wife, with whom he is coincidentally honeymooning next to her ex, is apparent from that first moment.

The first act unfolds with a delicious inevitability in this wittiest of plays, incredibly written by Coward in three days (one for each act?). It's vital in any production that the two principals must be cast as equally as Antony and Cleopatra and that's certainly the case here. Toby Stephens and Anna Chancellor as the sparring exes, whose passion immediately re-ignites across the flimsy barrier between balconies, are so much better-suited to each other than either of them is to their new, conventional spouse. 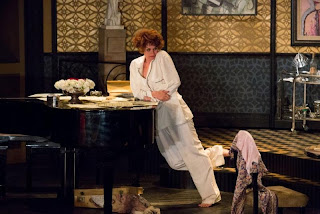 Anna Chancellor, seen here in Act Two, in particular seems made for the part - a perfect Amanda. Lithe as a panther, enviably graceful even when flinging herself across the stage in her silk pyjamas or dancing a parody of Stravinsky's Rite of Spring choreography to annoy Elyot, and elegant in palazzo pants and a cloche hat in her final escape scene.

I like my Elyots a tad taller and darker than Stephens (Alan Rickman was perfect in the role a decade ago, even though it was Lindsay Duncan's Amanda which won the prizes). But Toby Stephens has a nice line in subversive mugging asides. 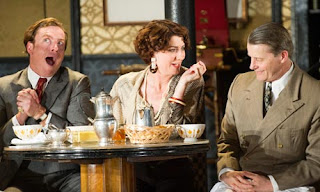 Of course Victor wants to punch him when the new spouses catch up with the old ones who have scarpered to Amanda's flat in Paris. But the way that Anthony Calf carefully rolls up his tie after taking off his jacket for the affray is a perfect stuffy foil to Elyot's line about whether they are to have a battle or a conversation.

In fact both Calf and Plowman make a lot of their deliberately lesser roles. Again, the costumes do a lot: scratchy tweed for Victor and ridiculously fussy Ginger Rogers-type pink feathered gown for Sibyl, while Amanda outshines her in sculpted bottle green velvet.

The way that Victor takes "Brioche?" as an unspeakable insulting invitation brought the house down.
Even Sue Kelvin's French maid Louise, grumbling and snuffling through improvised comments on her employers' domestic habits, makes the most of a little.

Other bits of dialogue feel less comfortable to a 21st century audience. There's no doubting that Elyot's line about some women needing to be struck regularly "like gongs" is witty but it makes for awkward laughter now.

But mostly, the play is imperishable. This production, directed by Jonathan Kent, has transferred from Chichester for a summer run at the Gielgud. It is as English as a Pimms No.1 on a summer day and should be a big hit with both visitors and residents. Catch it while you can. 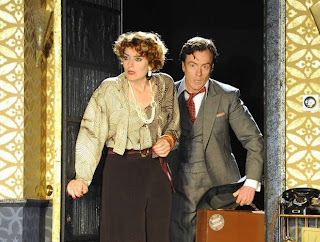