Veuve Cliquot on the Grand Canal


We were not in Venice FOR the Biennale, you understand. We just happened to be there the weekend it opened to the public. The really grand events are the parties before the public opening but I think I would have hated those. Still, since we were there and it was on and we probably will never experience that conjunction again, we went.

The Exhibition takes place in two ways. There are the main shows in two places: The Arsenale and the Giardini and you buy a joint ticket which gives you one entrance to each. At the Arsenale there is one enormous space divided into rooms, at the Giardini, there are separate Pavilions for each nation, the picture above being by Jeremy Deller, who curated the British one.

But the other way is much more serendipitous and sometimes better. Individual artists and smaller nations take over a palazzo or other space and you go in for free.

We paid our money and went through every room in the Arsenale. (I thought of Molly Bloom - "nice name [it] has!"). We saw wooden tables which has five legs all on one side or one zigzag one. We saw a monstrous ?Flight Attendant and many. many videos. 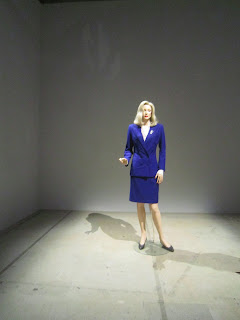 We walked round till our legs ached. Alarming and disturbing but very powerful was a vast room of skeletons made in grey plastic. Actually, not all skeletons; some had ribbons of flesh still attached. They were Venetians by Pawel Althamer. 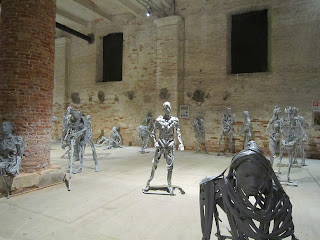 And a giant structure of what seemed to be stone but was in fact 3D printed and then treated with stone-dust, called Belinda. This was by Roberto Cuoghi 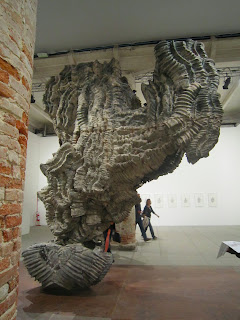 In the Giardini, after a roomful of pages from Jung's Red Book, we encountered the first of Tino Sehgal's performers. At first I thought a young woman was having an epileptic fit and was relieved to find she could control her movements while the young man writhing on the floor beside her beatboxed. For this untitled piece Sehgal won the Golden Lion for best Artist at the Biennale.

I was quite glad Roberto Cuoghi got a special mention. 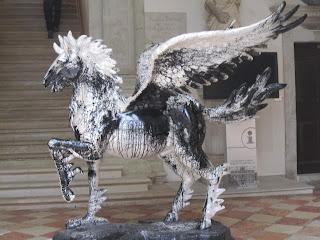 In the Palazzo Pisani, outside the main exhibition, the wings were on a horse by Simon Ma, the second most famous Chinese artist featured in the Biennale. His exhibition, called Ink - Brush - Heart, featured forms based on water drops. 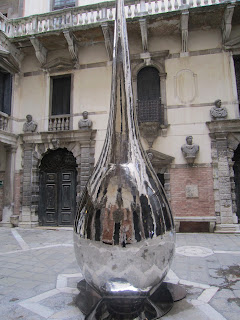 There was something quite haunting about Ma's work, which included semi-abstract peacock paintings as well.


There was a funeral in Madonna dell'Orto, so we saw another free exhibition in the building next door : Jorge Pombo's Variazioni di Tintoretto. This Barcelona artist had taken an original painting by Tintoretto, The Miracle of Saint Mark, currently housed in the Accademia in Venice, and systematically deconstructed it in several huge canvases, showing the scene more and more blurred and broken down.


This one is still quite recognisable. I don't know how great the Variations cycle really is but it was painted by someone with considerable talent and a clear idea of what he wanted to do.

In Madonna dell'Orto's Clositer was the best exhibition of the lot: Emily Young's massive head sculptures, in an exhibition called We Are Stone's Children. In materials ranging from Dolomitic Limestone to Lapis Lazuli, partial heads, profiles or half-views emerge from the rock like Michelangelo's Slaves in Florence's Accademia. 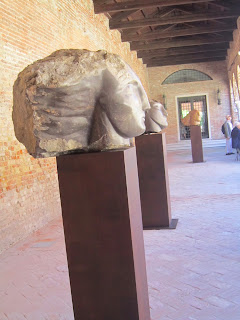 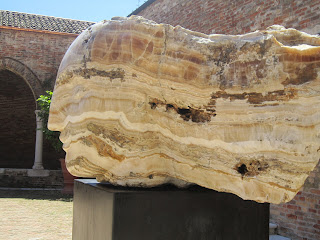 If I'd had a spare hundred and fifty grand, one of these would have ended up in my garden. You can catch the exhibition in London 6th-26th September at the Fine Art Society Gallery.

We missed the smart parties but were present at one of our own, with American art critic Patricia Fortini Brown, Shakespeare and Children's Literature scholar, Laura Tosi plus a writer, poet, musician, dancer and sculptor (the last four were all one person). Veuve Cliquot was consumed and Art and Literature discussed while overlooking the Grand Canal. That was quite smart enough for me.

What does the Biennale teach us about books, if anything? Here are two pictures: 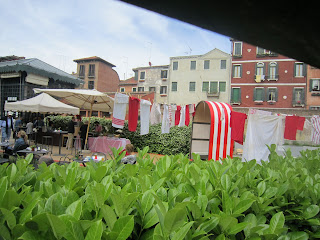 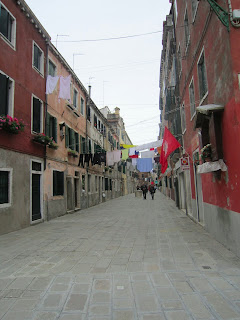 One is "Art", the other just washing. I'm sure you can work out which is which. There is too much of the former and not enough of the latter in much fashionable literature, including children's literature. It's not so much a question of the Emperor's new clothes not being there; too often there isn't even any Emperor. Just a Press Release and a puff from a big name.

I would award my Golden Lion to Emily Young.

It looks as though you had a fascinating time, Mary. I love the waterdrop and the stone heads.

And the washing! (Was that on Burano?)

Thank you for a glimpse of your serendipitous Biennale. I must say the 3D printed sculpture made the rumblings about that technology much more powerful - and interesting.

The washing was down on the Arsenale, Katherine. We didn't go to Burano this time, except to change vaporetti, but we did go to Murano and Torcello again.

And yes, Penny I didn't even kniw Belinda was 3D printed till I read the Guardian's review.