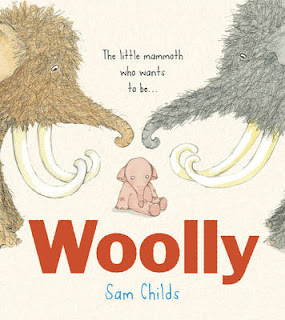 You don't very many books about mammoths. Though they featured in Julia Donaldson and Emily Gravett's Cave Baby three years ago. I was immediately put in mind of a friend who had a fierce grey cat called Woolly Bully.

But the grey mammoths in this book are kind, A mother and father and two older brothers, who welcome the new baby and call her Woolly. Only she isn't. She is a naked pink baby mammoth and for most of the book her family are finding ways to dress her in warm coverings so that she can out and make friends.

The most successful outfit is a onesie - complete with cap - knitted from goat wool. But poor Woolly feels too hot, on the coldest day of winter. And when the woollen onesie unravels she is revealed in all the glory of pink woolliness.

It's a lovely warm (!) book, written and illustrated by Sam Childs (who used to be Susie jenkin-Pearce, until she developed a new style with the Little Zeb books). I wish it hadn't been a girl mammoth though - that association of girls with pink is too deeply entrenched elsewhere.

Another book from Alison Green's imprint at Scolastic is The Snatchabook:


by Helen and Thomas Docherty, a husband and wife team.

"In every house,
In every bed,
A bedtime book
was being read."

If only! This is an idyllic woodland world, where all creatures take seriously their bedtime parental responsibilities. But something, someone, has been stealing all the books. Eliza Brown, a rabbit who lives in a tree, tracks down the thief.

And instead of being punished, the deprived little Snatchabook is allowed to hear a bedtime story in a different home every night.

This one's not out yet but it's going to be a hit. I saw them both in Bologna. 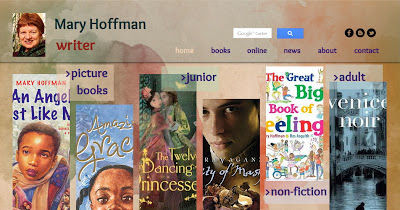 My new website has been designed for me by Anne Rooney. It is my fourth in about thirteen years. And the great thing about this one, made using Wix, is that I can update it myself.

Well, when I say "I can," it has been a bit of a learning curve and I'm not at the crest of that wave yet. But it is really learnable and will get easier every time I do it. Anne gave me good instructions and then held my hand through the first update (well, not literally: I needed both hands to do it).

One of the problems is that I have written an awful lot of books and an awful lot of kinds of book. Not really "awful" - at least not most of them. And not as many as Anne.

But I think it's a lot easier to navigate round the new site. Even though it has made no difference to how well I navigate round my working life. You can't have everything.
Posted by Mary Hoffman at 18:11 2 comments:

Where have all the Canalettos gone?

We haven't had a guest post on Book Maven for a while, but today we welcome a special one. It is publication day for Michelle Lovric's The Fate in the Box, her fourth children's book for Orion. This, like all Michelle's other titles, for children or adults, take inspiration from Venice as a setting. In her guest post for Book Maven, starting off her Blog Tour, Michelle talks about Venice then and now and what has happened to all the Canaletto paintings for which the city was the subject.