My last post began with a picture of Sarah McIntyre  and this one opens with the lady herself in all her pantomime glory! She and Philip Reeve attracted a lot of attention in the costumes they donned to promote Oliver and the Seawigs, a quartet of books initially inspired but soon elaborated from the CWIG group of the Society of Authors (which actually stands for Children's Writers and Illustrators Group). A happy conjunction all round for OUP.

And a more cheerful sight than Lucy and me gnashing our teeth and pulling our hair over the non-functionality of WiFi in our hotel and at the Fair. That is not pretty.

But there was not long to lament it as my first hour was at the big Bonnier stand, first with Hot Key and then with Templar. 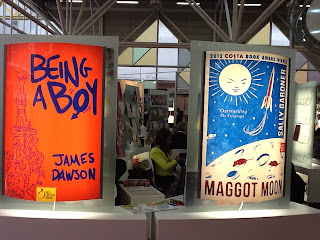 Hot Key go from strength to strength. They publishing nine titles last year, one of which - Sally Gardner's Maggot Moon - won the children's Costa Award and is shortlisted for the Carnegie Medal. In 2013 there will be fifty! This is Maggot Moon's adult cover, which I much prefer, with its flavour of Stalinist propaganda posters.

One of the things much talked about as a new trend in YA was crime and thrillers and Hot Key are publishing next year the sequel to Anne Cassidy's Looking for JJ, which will be called Finding Jennifer Jones. It will be ten years, coincidentally, since Anne herself was shortlisted for the Costa, when it was still called the Whitbread, with Looking for JJ (and won the Booktrust Teenage Book Prize for it).

If YA Crime really is making a comeback., Anne Cassidy will clean up, since she has always written in that genre and has a series out at present with Bloomsbury, called The Murder Notebooks. Hot Key publish a large range of genres, from historical fiction by Lydia Syson to Matt Whyman's The Savages, about a family of cannibals.

Templar had one of the most attractive picture books at the Fair, Winter's Child by Graham Baker-Smith. 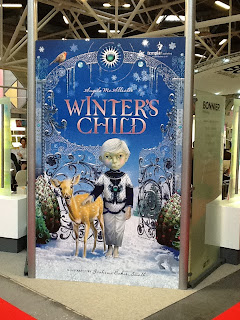 They were celebrating ten years of their -Ology titles with Dinosaurology, the twelfth in the series, which has sold 16 million copies in 35 languages. Another exciting forthcoming title from them is Cate Cain's The Jade Boy, a début novel in September about what really started the Great Fire of London.

The rest of the day went on my own work, first meeting with Liber magazine, an Itlain journal for children's books, for which I write the occasional article and then the Italian publishers Lo Stampatello, who publish my Great Big Books from Frances Lincoln.


I am writing a very hard book for Frances Lincoln and Lo Stampatello! More of that next year perhaps. But in Bologna we were spending part of the second day launching The Great Big Book of Feelings, written by me, illustrated by Ros Asquith, edited and published by Janetta Otter-Barry and Art Directed by Judith Escreet. We really are an "awesome foursome" when working together.

First there was a splendid party at Frances Lincoln's new stand, as part of Quarto.

That's prosecco we are drinking. I don't - perhaps fortunately - have a photo of the multi-course meal we had at da Fabio afterwards, so here is a picture of the book we are celebrating! 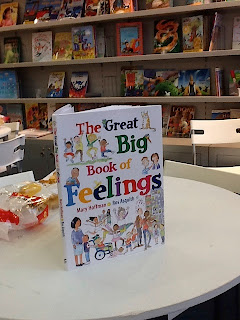 Next time I will try to post a link to the video and tell you the Faroese story.
Posted by Mary Hoffman at 00:01

Absolutely marvelous event! Congratulations for those who had the chance to be there and enjoy the atmosphere!