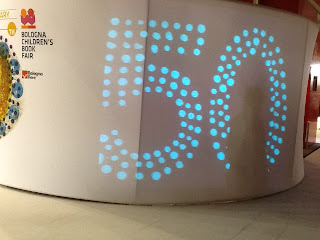 This was a special Bologna - the 50th anniversary of the Children's Books Rights Fair that had started back in 1964 with about twenty publishers round a table in a palazzo in the town centre. This year there were 1,200 exhibitors from more than 70 countries. Since 1967, there has also been an Illustrators' Exhibition and this year's Special Guest was Sweden. 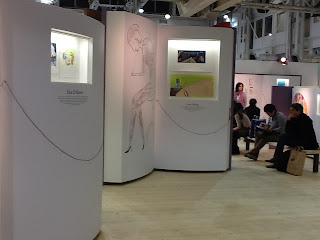 My first official port of call on Day Three was Scholastic but I had time to nip in quickly and say hello to Kate Wilson on the Nosy Crow stand. They are now publishing in over twenty languages and are up to fifty titles a year - which Kate thinks is a good limit. Lucy Coats  has a very disgusting pirate picture book coming out with them next year, called Captain Beastlie's Birthday, illustrated by Chris Mould, who is currently on the shortlist for the Kate Greenaway Medal.

Scholastic had some nice picture books too - The Snatchabook by Helen and Thomas Docherty and Woolly by Sam Childs, about a baby mammoth born naked and chilly. M.D. Hilary Murray Hill was very upbeat about the future of books, not giving any credence to the idea that YA was on the wane.
"The quality of the writing comes first," she said, about any book that comes over her desk, whether YA or whatever age group and in whatever genre.

It was a bit disorientating to visit Alyx Price on the Macmillan stand! She had been their head of Publicity eight years ago, when she went to Scholastic at the same time as Marion Lloyd, Kate Wilson and Alison Green. Now she's back at Macmillan doing maternity leave cover and was telling me about their new books only weeks into the new job.

The gold standard picture book author and current Children's Laureate Julia Donaldson has a new title, Sugarlump and the Unicorn coming out next year, illustrated by Lydia Monks. And the new young talent Rebecca Cobb, who had just won the Waterstone's Prize, has a new book called Aunt Amelia, which was attracting attention. It was a bit retro, nicely reminiscent of the early days of Joihn Burningham and Brian Wildsmith. 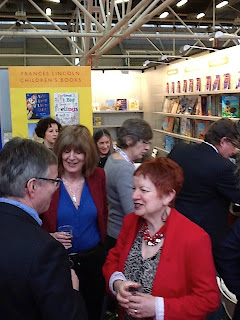 I promised to tell you the story about the Faroe Islands. Above you can see me and Ros talking to our Faroese Publisher, Niels Jakup Thomsen at the launch party. Janetta mentioned it in her speech but this what happened: The Faroese government had a debate coming up on Gay marriage, so Niels thought he would give every MP a copy of The Great Book Book of Families, which happens to contain one line and one illustration that takes it for granted that some families have two mums or two dads.

There are only 33 MPs in the Faroese Government but it was an imaginative plan. A television company filmed one of the three Christian Party MPs opening the book, with the predictable harumphing. So then Niels himself was on the TV defending the book!

So, it was Day Three and we were going home in the afternoon. I just had time for three more appointments.  First up was Stephanie Thwaites, the Children's Agent at Curtis Brown. She made an interesting point that it's harder to sell books with male protagonists than female. (My two current projects both have male leads!) Her client Martin Bedford, who had done so well at Walker with his book Flip, had switched to a female lead for his new title, Neverending.

Stephanie was not the only person to suggest there is a trend developing towards contemporary romance.

I met three students from Oxford Brookes' Publishing MA, who were enterprisingly visiting the Fair and seemed very on the ball with all the latest developments. And then it was time for a final lunch in one of the restaurants at the Fair - this time with Venetian Professor Laura Tosi, who has written a book in Italian about English children's books, and critic Peter Hunt, a now retired academic, who wrote many articles for the children's literature journal Signal.

And back to the UK, after another 40-minute wait on the runway for the same reason as on the way out and a baggage-reclaim delay caused by a machine getting stuck in the doorway!  I crawled into bed at midnight after three full days and three short nights, knowing I must sort through pages of notes, handfuls of business cards and a suitcase full of Rights catalogues.

Not everything was the same as in years past - including the weather - but on the whole another good Fair and a sense that children's books were holding up well in the recession. 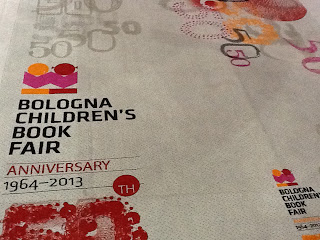