It starts Day One minus one really, as large numbers of publishers, agents and a small sprinkling of writers and illustrators gather at the airport on Sunday. In this picture you see Liz Cross from OUP, Christine Baker from Gallimard, myself, Jane Churchill, who organises the Cheltenham Book Festival and scouts for Gallimard, and fellow author and Fair Companion Lucy Coats. Whacky artist (of which more below) Sarah McIntyre took the shot.

We also saw writer Philip Reeve, illustraor Axel Scheffler, agents Catherine Clarke, Claire Wilson and Sophie Hicks and publishers Fiona Kennedy, Helen Boyle and Ingrid Selberg. On the plane I sat next to agents Sarah Molloy and Jennifer Custer from A M Heath and had plenty of time to chat as we waited for an hour for an unaccompanied bag to be taken off the plane. Surely no-one in the children's book world would have gone to the bar at 3pm and become too tired and emotional to board the plane for Bologna?

So we missed our first party (Random House) but had a much-needed glass of prosecco with Lucy's agent Sophie Hicks and then dinner. We were all ready to hit the Fair bright and early for the first real day. 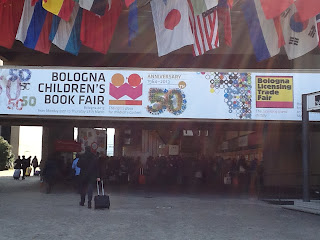 We both visited the Press Office first, bypassing the huge queues, as I was covering the Fair for BookBrunch and Armadillo and Lucy for Publishing Talk.  And my first appointment was very easy - coffee with my Finnish publisher from Tammi in the Agents' Centre bar.

I am always amazed by the output and fame of writers in other countries that we simply don't know about here.Salla Simukka has written ten books already and is still only thirty; Elna Rouhiainen is only 24! If only we were less resistant to translated European literature.

Then my proper meeting with Sarah Molloy and Jennifer Custer and an introduction to a new genre for me - the "wilderness thriller." S. R. Johannes had developed her book Untraceable through the Alliance of Independent Authors, a collective of self-publishing authors and advisers that Jennifer works with a lot. Untraceable is already an Amazon bestseller and Johannes is not bothered about a conventional publishing deal.

Dodging two ?men in bright green velour onesies (this sort of thing happens all the time at Bologna) I met with Jane Walker from Barrington Stoke. They've had a great year, which saw their fifteenth anniversary, with profits up 20%, reflecting the wider scene in children's books, which has been by far the healthiest part of the publishing industry. Barrington Stoke prides itself on getting top names to write for them and have new titles from Meg Rosoff, Darren Shan, Anne Fine, Gillian Cross and Eoin Coifer.

They are also getting into picture books, with titles by Michael Morpurgo, Mike Rosen and Charlie Higson. And they are not the only ones. I met with Charlotte Williams who was covering the Fair for The Bookseller and we agreed that though day one was early to judge, the revival of picture books was a marked feature. Faber were starting a picture book list - four titles at year - and Templar have started the Big Picture Press.

I'll have more to say about picture books in my next couple of posts. 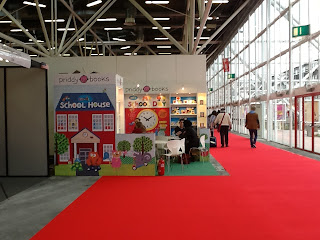 Wonderful! I'm so glad to hear that picture books are on the increase. Looking forward to further Bologna Blogs.

Have always wondered what it's like there! Thanks Mary...look forward to reading more.

So wish I could have been there with you both - and everyone else. Sounds quite encouraging - not red carpet littered with corpses of despondent authors/publishers.

Great picture of all of you. And good news on picture books Mary since I had two there at the Fair and one at pitch stage. Look forward to your blog on picture books... thanks for feedback so far.

Always enjoy hearing 'behind the scenes'. And hurrah! Like others, I'm looking forward to hearing more about picture books.