I started this weekend thinking I had three major tasks to do before Monday and then got an email adding a fourth that had to be completed too.And that got me wondering when I last had a weekend off.

I'm not complaining; it is the way of life of most freelance, self-employed people. And we willingly trade it off against a packed commute in all weathers to a workplace where we have to do as we are told.

Next weekend I'm off to Bologna for three days at the Children's Books Rights Fair, which is one of the reasons my tasks for this weekend have been urgent. I'll be writing about the Fair here, on Bookbrunch and for Armadillo magazine.

Most children's writers and illustrators are aware of how the book fairs - Bologna and the London Book Fair in the spring and Frankfurt in the autumn - impinge on the working lives of our Editors, Art Directors and Rights managers. Increasingly they affect our own work patterns too, working towards having texts, mock-ups, covers and proposals ready to show to foreign publishers.

But the day-to-day work also has to continue. I've been doing a fair bit of work on my new website, which goes live next week. But no-where near as much as my web-designer, obviously. And whatever book I am working on (usually more than one - currently five, I think), new things crop up all the time.

Just this week I've had an approach for permission to turn a play based on Amazing Grace into an ebook; ongoing edits on the short graphic novel I surprised myself by writing to commission; submitting a picture book text and getting feedback on it; dealing with my other blog The History Girls; fixing and altering Bologna appointments ... the list goes on. I expect everyone's life is like this really.

What I HOPED to be blogging about this weekend was the launch party for Tracy Chevalier's new novel The Last Runaway. But thanks to an overturned lorry on the M40, I didn't get to London until the party would have been finishing. Here is a picture of the cover to console you: 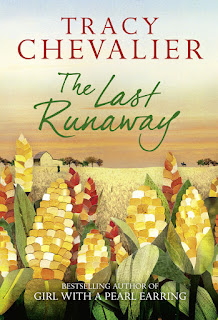 Didn't we have last weekend off? Or, nearly...

But yes, that's how life goes. And although Bologna is very far from time off, you'll have fun!

I was working while you were in Oxford/Hampshire but yes we had some of it off.