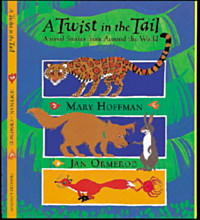 Once again a post determined by a death. I heard with great sadness that Jan Ormerod had died. She won the Mother Goose Award with her first picture book, Sunshine, in 1980 and I met her soon afterwards. She had two little girls and I had three and for a while the two families mingled but then Jan's moved to Cambridge and we lost touch.

Years later she came back into my life as the suggested illustrator for the book that became A Twist in the Tail (see above). I remember going to meet her at Frances Lincoln's offices in Kentish Town and finding her rather jumpy and nervous. Only after I, our Editor, Janetta, and Art Director, Judith had exclaimed over the utter wonderfulness of her animal paintings, did she admit that she had been worried about whether we would like them!

Goodness knows how many books she had published by then but Jan never became in the slightest degree immodest. The early books, Sunshine and Moonlight, used her daughters as models and her husband Paul. Their marriage did not last but I could tell from her posts on Facebook how thrilled she was by the arrival of two grandchildren: Miles and Adelaide.

Facebook and occasional meeting at conferences - that's how I encountered Jan in recent years. So it was appropriate, though shocking, to find out about her death through a notice posted on Facebook. The memorial service for Jan is in Rutland next Tuesday and I shan't be able to go. But I shall think of her.

If you have been touched by Jan's work or life, you might want to visit https://www.justgiving.com/JanOrmerod to make a small donation to the hospice that enabled her to die with dignity and in peace.
Posted by Mary Hoffman at 17:24

So sorry. Knew her well for a short period in the 1980s. Thanks for putting this here, Mary.

Thanks Mary, you said it for lots of others who found her as the person you described. Masses of talent and a good helping of modesty too. Paul Ormerod

Very sadden by the news of Jan Omerod's death. I have loved and cherished her books over the years, and so too my daughters and now grandchildren. I know these books will be ongoing treasures for many avid fans and future readers.