What not to write in your Christmas card 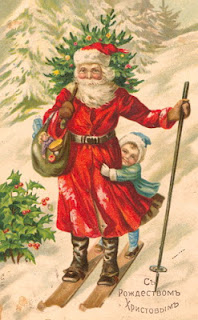 The entire hand-written text of a card just received from an old school friend reads, "Any grand-children yet?" (Well, there's the usual printed "Season's Greetings" or whatever, but I was so startled I didn't notice that).

I'm sure she didn't mean to be rude or upsetting in any way but the measure of my reaction can be gauged by my reply in my card to her: "No, not yet!"

The exchange just made we wonder what is acceptable to put in a card. In another one, a different schoolfriend (these are the only two I have kept up with) mentioned how she and her husband were feeling really old but, by definition, she is the same age as me and I don't.

Most people don't just write "Good wishes" or "With love" and I admit to feeling just a tad disappointed if they do. If you hear from someone only once a year, you sort of want to know what they've been up to in the last twelve months. But when you have several children and a busy career, you get tired of writing all the same words in a hundred cards: hence the dreaded Christmas newsletter. 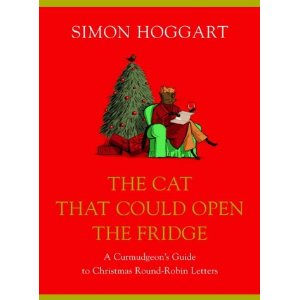 Such things led to Simon Hoggart's first book on the Round Robin, The Cat that could open the Fridge. Followed later by The Hamster that Loved Puccini.

It's apparently a middle class phenomenon, the Christmas newsletter and I am guilty as charged on both counts. Wikipedia says "While a practical notion, Christmas letters meet with a mixed reception; recipients may take it as boring minutiae, bragging, or a combination of the two, whereas other people appreciate Christmas letters as more personal than mass produced cards with a generic missive and an opportunity to "catch up" with the lives of family and friends who are rarely seen or communicated with."

Lynne Truss is currently producing "Six replies to the Christmas newsletter" on the Today programme on Radio 4 and this morning's episode saw her get her revenge by correcting the family's punctuation and telling the wife her husband was a secret adulterer! Clearly she hates them.

The first Christmas card was produced in 1843, only 170 years ago and got the creator into a bit of trouble, since it showed parents drinking wine with young children:

Bizarrely, it came out in May. I wonder what message people put in them? "Have a great time in seven months from now!"?

Do you send lots of Christmas cards, a few or none? And what do you write in them? Do you hate round robins or find them interesting?

And have you got any grandchildren yet?

The durability of myth 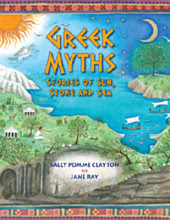 Pandora's box, the Midas Touch, Titanic, tantalising - you can't live long in Western culture without stumbling across references to these and many other Greek myths. They seem indestructible. The latest re-telling for children is written by experienced storyteller Sally "Pomme" Clayton and illustrated beautifully by Jane Ray (Frances Lincoln).

It contains ten stories "of sun, stone and sea," which sums up some of the appeal of tales set in Greece, blessed in its climate if not in its economy. Pandora releasing a swarm of stinging insects, Medusa, not just snake-haired but tusked like a boar, Pegasus, the Chimaera, Midas with his ass's ears, Atalanta running - they are all here, bringing their familiar magic. It's a good introduction for a child who hasn't met these stories before too. 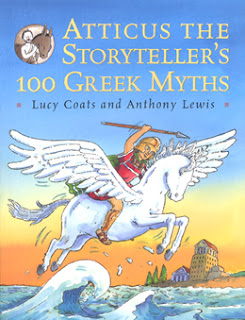 They were re-issued in 2009/10 as a series of 12 story books, Greek Beasts and Heroes, but earlier this month they had an even more up-to-date incarnation as Lucy used them as the basis for writing a hundred Greek Myths in 140 characters as, yes, you've guessed it, Twitter Fiction!

That one was read by Lucy to Martha Kearney on radio 4's World at One and is the second of the abbreviated Creation Myths.

Amazing, isn't it? Millennia since the Heroic Age and now a version for the nimble-thumbed smartphone generation makes the radio News.  Just notice the next time you meet an allusion to one of these enduring stories. There is no truth more durable than myth.

You can read them all on Lucy's blog Scribble City Central.estival-100-myths-in.html
Posted by Mary Hoffman at 16:52 2 comments:

Email ThisBlogThis!Share to TwitterShare to FacebookShare to Pinterest
Labels: #twitterfiction, Greek Myths, Jane Ray, Lucy Coats, Mary Hoffman, Sally Pomme Clayton
Newer Posts Older Posts Home
Subscribe to: Posts (Atom)
I am your Grammar Grandma - think of me as your Fairy Godmother for Language. I'll be writing mini-essays here every week on an aspect of language: common mistakes, new usages, how to write more effectively. Look at the pages About me and What I can do for you to learn more.