The RSPCA emailed me about a competition they are having and asked me to write about my favourite animal book when I was a child. It's very hard to think of just one. It wasn't my first book but I loved Gwynedd Rae's stories about Mary Plain, who was a bear cub from the "bear pits at Berne." (I had no idea what that meant).

Mary had so much character. Her best friend was The Owl Man, known thus because of his large horn-rimmed glasses. The Owl Man had a friend called Fur Coat Lady, but neither Mary nor I wondered whose fur it had been before. The little bear was very fond of cream buns though if she ate too many could fear she was going to be "untidy."

Before Mary Plain, I had been hooked on the Mary Mouse books by Enid Blyton, with their odd small landscape format. At the opposite end of the size spectrum came Kathleen Hale's giant Orlando books: 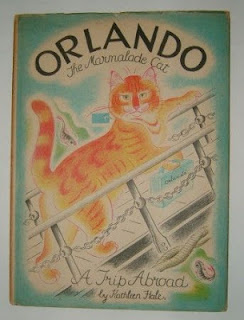 Really nothing else could do justice to the overwhelming glamour of a large and handsome ginger Tom. Orlando's home life showed him as very much the boss of the operation, with his wife always in an apron and doing domestic chores.

Orlando was the breadwinner (?mousewinner) though I do remember one book (?Orlando goes Camping) in which the adult cats and kittens partook heartily of watercress - a rather unlikely food for felines but I'm sure Kathleen Hale enjoyed painting it.


Another favourite was Sam Pig and Sally by Alison Uttley though I can't remember any of the stories now.


I didn't really get on with Wind in the Willows and feel no nostalgia for it. Peter Rabbit I don't remember having at all and yet I seem always to have known those little child-friendly square hardbacks that Frederick Warne produced of Beatrix Potter's stories.

There was no Roald Dahl when I was a child - perhaps I should like him better if there had been - and no Dick King-Smith or Michael Morpurgo - whom I would have enjoyed more.

But in the RSPCA's survey, Dahl's Fantastic Mister Fox came out top of the favourite animal books remembered by adults aged 16-64 this September, with Wind in the Willows coming  second and Beatrix Potter's books in general coming third.

The survey was linked to the writing competition Wild About Britain. There are two age categories in the competition to write a short story about a British wild animal (no bears or ginger cats) – 11 years and under and 12 to 16 year-olds. The closing date for the competition is midnight on Monday 10 December 2012 and the winner will receive a selection of books from Random House publishers and be published on the website. The full judging panel is to be confirmed but will include Chris Packham.

And what was your favourite animal story when you were a child?
Posted by Mary Hoffman at 18:31

Oh, Mary Plain! Definitely. I loved her so much, and was able to pass on some of the books to my daughter. When they had to make puppets of their favourite animal characters in primary school she chose Mary but no one had a clue who she meant. And I loved Enid Blyton's Nature Lovers series. How lovely to remember these again.

Before I could read, I'd spend ages (seemingly) trying to figure out the story of Rupert Bear cartoons. I'm not sure that the weird and wonderful adventures I remember him having existed outside my head! Once I could read I borrowed all the Little Grey Rabbit books I could find on the library van with its enormous steps that I could barely walk up.

Orlando, definitely. Also Toucan, Toucan which must have been pretty much brand new. And Winnie-the-Pooh and Paddington when I moved on to more text (if we can count them, as they're not real animals). And Doctor Dolittle's menagerie.

MARY MOUSE!!! I loved all those. And then, Dr Doolittle. All of them. Lovely post.

I think my absolute favourite would have been The Magic Pudding.
But I had Mary Plain too: just remembering how terrified she was of being punished by the older bears.

The essay help canada is going best toward favourable conditons