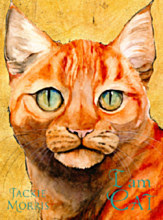 I'm an unashamed cat lover, but I've never had a ginger, though I find them deeply attractive. Jackie Morris, on the other hand, has had lots. And, as is the way of it with cat owners, she has lost many over the years too. This gorgeous, quite large-format picture book was inspired by one of them: Pixie.

The ginger curls up "ammonite tight" on her patchwork cushion and dreams of her bigger cousins, from the tiger, "bright flame cat of the forest" to the Scottish wildcat "ancient, almost a memory." The artwork is stunning and the text lyrical and there is a spread at the end with all the natural history details of the elegant felines. A must for every cat-lover, but you'll have to get your own; I'm not parting with mine.

Ginger cats have been getting almost as much coverage in the media and on social networks as a certain transatlantic event. Two candidates have been vying for the title of (The) Tobermory Cat. One is a photographic book by Angus Stewart and the other a picture book by Debi Gliori.

I had read so much online about Stewart's claims of plagiarism and Gliori's being cyber-bullied by people who thought that Stewart had invented this feline that I bought both books. (I like to know what I'm writing about). 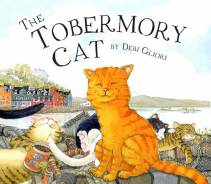 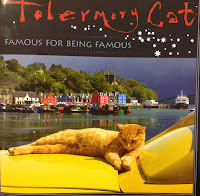 And really you know they just aren't the same kind of book at all. I loved looking at all the photographs of the (apparently) composite cat in Angus Stewart's book. He (they) is clearly a real character. It makes a lovely album.

But Debi Gliori's is telling a story, a made-up story, for younger children about finding a way to be special. It's not an Obama/Romney kind of choice at all. I'll keep them both.


But that's not the end of my cat stories! I have been catching up with a bit of a backlog and I hadn't come across Puss Jekyll and cat Hyde before. The text is a poem by Joyce Dunbar and the illustrations are by Jill Barton, whose work I didn't know. 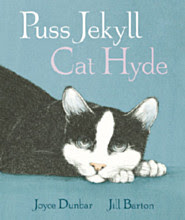 It's a simply premise, recognisable to every  owner, that domestic cat has two distinct personalities: the cuddly, purry, wanting its tummy tickled delightful companion and the fierce and solitary hunter. Eleanor Farjeon caught it in her poem Cat: "Sleeky flatterer/ Spitfire chatterer." And Dunbar does it here too.

My only worry would be that the Jekyll and Hyde allusion will be lost on children.

I must end with another Jackie Morris book, one so beautiful that it seems impossible paper and card could contain so much magic. 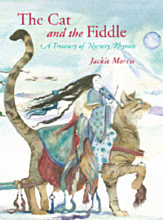 The reproduction of the cover here doesn't do it justice; the colours are much richer and the detail sharper. This book is currently nominated for the Kate Greenaway Award and I'd love it to win. Collection of Nursery Rhymes or Stories are often called "treasuries" - I've done one myself - but this one does feel like entering a secret room full of unimaginable precious objects.

Forty simple and familiar rhymes are transformed by Morris's alchemy into full blown stories through her art. The fine lady who rode to Banbury Cross for example has not just rings on her fingers but a hawk on her wrist (I suspect the correct Merlin); not just bells on her toes but a train of minstrels including one playing two recorders at once like the musician in Simone Martini's Knighting of St Martin fresco in Assisi.

The girl in Lavender's Blur rides a polar bear! And we ride to Babylon with a winged lion and a winged horse. Giant cats and giant sheep - nothing is what you expect. Weasels swarm and kiss and stir the rice and treacle - oh I can't go on; it is just too gorgeous for words. Give the woman a prize and give the book to every child you know. I WISH I'd had it when I was a little girl.

How lovely to see all these cats! Thanks for the post and for highlighting one of my fave books of the year, The Cat and the Fiddle. I am so glad Jackie Morris is on the Greenaway longlist and I'm sure she'll make the shorlist. She's brilliant.

Oh my gosh! I know Joyce Dunbar - at least I used to. I wonder if she'd remember me? It must be thirty-five years... What a lovely looking book! I must must get it.

VERBUM SAT SAPIENTI: As an ex-writer of the sassy, savvy, schizophenia we all go through in this lifelong demise, I just wanna help U.S. git past the whorizontal more!ass! we're in (Latin: words to the wise)...

"This finite existence is only a test, son," God Almighty told me in my coma. "Far beyond thy earthly tempest is where you'll find corpulent eloquence" (paraphrased). Lemme tella youse without d'New Joisey accent...

I actually saw Seventh-Heaven when we died: you couldn't GET any moe curly, 3stooges, party-hardy-endorphins, extravagantly-surplus-lush Upstairs when my beautifull, brilliant, bombastic girl passed-away due to those wry, sardonic satires.

"Those who are wise will shine as brightly as the expanse of the Heavens, and those who have instructed many in uprightousness as bright as stars for all eternity" -Daniel 12:3

Here's also what the prolific, exquisite GODy sed: 'the more you shall honor Me, the more I shall bless you' -the Infant Jesus of Prague.

Go git'm, girl. You're incredible. See you Upstairs. I won't be joining'm in the nasty Abyss where Isis prowls
eklektikmantra.blogspot.com