What are little girls made of? 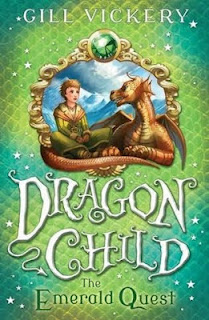 I am going to try and write this whole post without using the word "feisty"! For a long time now, books published for the 7-11 age range have been broken across gender lines and the most egregious examples are anything originated by Working Partners.

After the huge success of Rainbow Fairies by "Daisy Meadows" (now up to a 100 titles) they launched into Beast Quest by "Adam Blade" to perform the same magic for boys.

That says it all really: young girls = fairies, glitter, pink, rainbows and all things lovely; young boys = adventures, fighting and defeating curses. These series are written by a committee of different writers to a very tight brief and are nothing like the kind of books that grow out of the interests and passions of an individual creative writer.

So it is very refreshing to turn to two new books by writers who, without any sense of strain, are producing series which naturally feature forceful and resourceful heroines who have no intention of letting the boys have all the fun and adventures.

The Emerald Quest is the first in a projected series of six titles in a series called Dragon Child, which might have been written to demonstrate how the Beast Quest idea works just as well with a girl in the main role.

Tia has been brought up by dragons but can just remember being kidnapped from her human father while her mother was away. And she fears that her mother might be one of the six High Witches, sisters in magic, who have stolen a necklace with supernatural powers from the DragonQueen. Goaded by jeers from a young dragonet, Tia sets out to retrieve the jewels and prove she is a true DragonChild.

Each book will follow the adventures of Tia and her foster-brother, the dragon Finn, as they steal back each of the jewels. The emerald gives the power  of understanding animal language and is in the clutches of terrifying with Malindra, who is a cross between Cruella de Ville and the three witches in Neil Gaiman's Stardust.

There are some genuinely scary and throat-parching moments along the way and Tia doesn't get her way easily but she is a very engaging new role model for any girl tired of soppy princesses.

So is Rhianna Pendragon, who has reached the second book in Katherine Roberts' Pendragon Quartet, The Lance of Truth. Rhianna, who is King Arthur's daughter, also has magical objects to collect: she won Excalibur in The Sword of Light and is now fiercely determined to gain the next  totemic item. Like Tia, Rhianna has a male companion to go with her on her quest, making sure that the books are equally enticing for male readers. Rhianna's is an Elvish prince and they both ride mist-horses, who are the author's invention.

The kind of witchcraft Rhianna Pendragon has to battle is even darker - that of Morgan le Fay, who is supposed to be dead, and her ingeniously evil son Mordred. In this book Rhianna is reunited with her mother, Guinevere, but the Queen is somewhat disappointed in her daughter. She would prefer the kind of princess who is more interested in beautiful dresses than in swords and horses.

Well, Guinevere, I can't agree. I like Rhianna and Tia just as they are. Long live the adventurous girls - who are certainly not made of "sugar and spice and all things nice."

Am looking forward a year when someone I know should be just the right age for these books!

These sound great - they'd certainly have appealed to me as I was growing up.

Thank you Mary! And congratulations to Gill on the new series.

We were playing Scrabble once and someone laid "feisty" - but it wasn't in the dictionary we were using so was disallowed, and caused a massive argument! Rhianna doesn't see what the problem is, really... she'd soon sort it out with Excalibur!

Love your blog Mary. I enjoyed reading about Gill's new series of books. I bought The Ivy Crown for the girls in my family - and they loved it. I'm looking forward to buying them, The Emerald Quest.