Proud to wear the T-shirt by Mary Hoffman 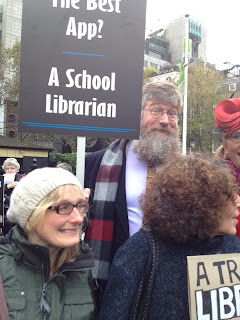 Assembled here this morning in Victoria Embankment Gardens: Left is Cressida Cowell, who had left her dragon at home, centre Philip Ardagh, who had brought his beard with him and right is Francesca Simon who was not being at all horrid (this does not describe their respective political stances). They were gathering for the Mass Lobby on Parliament for School Libraries. 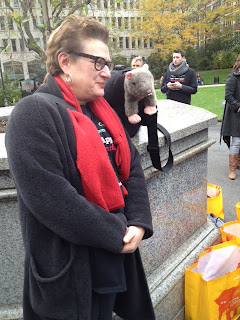 Here's another luminary: Meg Rosoff. You can just glimpse her T-shirt and the yellow bags hold more. Other writers who were there were Chris Priestley, Candy Gourlay and me. (I'm bound to have forgotten someone). 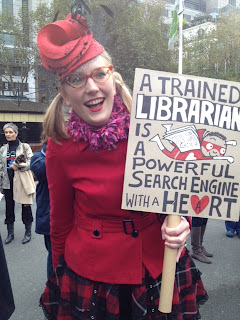 Of course! Sensational illustrator Sarah McIntyre, with her own design of banner. I hear author An Vrombout was there too.

This brilliant lobby was organised by Barbara Band, Vice President Elect of CILIP, and her helpers. Those of us attending were to have contacted our MPs and make an appointment to meet them in the Central Lobby of the Houses of Parliament. But mine is David Cameron, so I was not hopeful this would work. 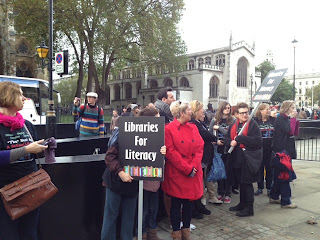 Eventually we were ready to set off (that's Meg again, now holding a banner). We walked along the embankment to Westminster. 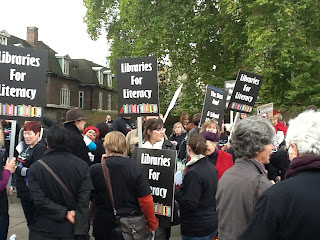 Barbara Band is on the left. On the way, the chant was suggested of:

but I vetoed that one on the grounds it would sound as if librarians and authors did not now how to spell "statutory."

Meg suggested changing the first line to "What kids need is lots of story" and we had offers of "Here we are in all our glory." I thought maybe, "Don't bring up our kids as fools/Put a library in their schools."

But funnily enough, we had arrived at the Houses of Parliament by then and no chanting took place. I shouldn't have objected to the first one - nobody likes a pedant. 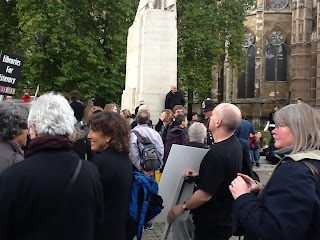 We had to stand by a statue across the road from the House of Commons and wait to to be told where to go. Strict security operated and we were let in by batches of about twenty (there were 120 or so on the march). The airport style scanner revealed a dubious object in my bag, which turned out to be my reading light for the homeward journey.

The police were charming and helpful and sympathetic to our cause. as soon as we were inside, we were directed to the café and loos but most of us heading off to the Central Lobby between the house of Commons and the House of Lords.

There the staff were, by contrast with the police, unfriendly, offhand and aloof, leaving us all quite sure who the "plebs" were. I filled in a green card for Dave, my local MP but he didn't come out. I suppose he was busy running the country. But it was exciting to hear people's names called to meet their MPs - Bill Cash, David Milliband, Michael Gove, Diane Abbott.

Indeed, Bill Cash told his Lobbyist that he was going to draft an Early Day Motion about makes school libraries statutory! And this happened, according to Barbara:

"we had a meeting with Liz Truss (which also involved Annie Mauger and other CILIP staff) .... and the outcome is that the Minister has commissioned the All Party Parliamentary Group (APPG) for Libraries to lead an investigation into the benefits of school libraries."

It's a no-brainer really, isn't it? If you want a literate society, put a well-stocked library, run by a well-informed qualified librarian into every school. 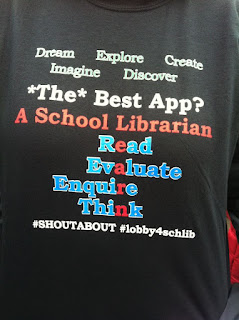 It was a brilliant day and I'm still wearing my T-shirt. There are bound to be other occasions when it will come in handy.

(T-shirt photo and authors' group photo shamelessly nicked from Facebook; all others taken by me)

Well done to all the librarians and authors at the lobby - and thanks for describing the day's happenings. Was thinking of you - and the value of school libraries. A good and active library - and that means interested staff - is so often an indicator of a school's true commitment to reading, from what I've observed on my travels.

It was a great day, husband John and I were proud to be a part of it. I hope we've all achieved significant results. Getting school libraries to be included in the Ofsted inspection process would be great, then Heads would have to justify not having a professional librarian and/or a library.

Well done, all of you! Wonderful that you've got them thinking seriously about it all. But you really shouldn't look quite so cheerful when on the march in defence of something serious!!!!

What a great day it must have been. Love the t shirts! Who had them printed up?

Sounds as if you have the same idiots making decisions over there as we do here - the same kind, anyway. Teacher-librarians like me are a dying species in Australia too, because it's cheaper just to hire someone who isn't a professional. At best, a paraprofessional library technician, but often not even that, and some primary schools have closed down their libraries altogether, leaving just a book room - all to save money! :-(

very interesting information, I really like it because it can add insight for me more broadly, thank you very much for this extraordinary information
Obat Benjolan Di Pipi Atau Wajah Tanpa Operasi