A weekend with mates


Don't we look as if we're having fun? And we really were, in spite of quite bad wine (which the bar ran out of after the first night), canteen food and miserable microphones. But we didn't go for any of those things; we went to meet each other and to talk. I am here flanked by Katherine Langrish and Anne Rooney, two writers who are among my favourite people to talk to.

We were at the Children's Writers and Illustrators Group (CWIG) conference, held this month at Reading University. These conferences happen irregularly, about once every three years. I've been to them at Brighton, Leeds, Oxford (the year I was Chair, handily) and Cambridge. And now Reading. This one was called Joined-up Reading but I can't remember the names of any others.

It was opened by the marvellous Kevin Crossley-Holland, who is the new President of the Schools Library Association and closed by the equally marvellous Allan Ahlberg, of whom more anon. There were 130 of us for the whole weekend and 70 day delegates on the Saturday. All writers and illustrators, apart from a few speakers from publishing or the book trade. It was a gathering of published practitioners from Helen Craig to Sally Nicholls, Prizewinners to Midlisters, all eager to talk about the state of our very peculiar industry and our place in it.

Lots of us have already blooged about it: Helena Pielichaty, who is the current Chair of CWIG; Sarah Mackintyre, committee member and insanely good caricaturist; Ros Asquith, my mate and illustrator for The Great Big Books of ... and hugely talented artist, who gave a talk with Jane Ray, another good friend, with whom I've done two books; Celia Rees at The History Girls.

On the Saturday, because of a brain/diary malfunction, I had to go to London and my place was taken by my daughter Rhiannon Lassiter, who took copious notes and put them up here. There was a session on writers' websites and joint blogs, which I was sorry to miss. And the parallel session I had booked in for was What Shall I Write? Everyone is chasing the next Big Trend but as has been said before, if you write with one eye on the market, you will almost certainly be producing the last Big Trend.

Not for the last time, the message was "write what you want, what you feel passionate about."  I felt uneasy about this, as someone who needs to make a living from her books, and this has been more eloquently teased out by my friend Anne Rooney.

There was a panel on prequels and sequels with Patrick Ness, Geraldine McCaughrean and Charlie Higson. Trilogies, taking on another author's idea, Peter Pan and James Bond - just part of the eclecticism that is the children's book world.

Literary Festivals and Book Prizes - Robert McCrum talked about the "boom years" 1980-2010 (I would put the finish date a little earlier) and how it was really hard to see what the future would hold. Organisers of several festvals - Jane Churchill (Cheltenham), John McLay (Bath) and Tamsin Ace (Imagine Children's Festival on South Bank) - talked about how they organise theirs.

I went to the same parallel session as Celia Rees on the Sunday and also took a photo:

These two wonderful writers are not only prizewinning and innovative but incredibly intrepid and courageous. They were talking about researching their books but along the way casually remarked on being arrested for murder in a foreign country and visiting a fashion designer in Paris (I know which would have scared me more).

There was a depressing panel on The State of the Industry, where Philippa Dickinson of Random House told us there was no going back to the Net Book Agreement and that royalty systems were fair to authors, Alan Gibbons, Library Campaigner, said that 10% of School Librarian posts had been cut, and that authors get no PLR from volunteer-run public libraries. Sam Husain said that Foyles was launching the UK Nook at Foyles and everyone seemed nervous about the dominance of Amazon and Kindle.

After that, it was very necessary to have some coffee and lovely to hear Allan Ahlberg: 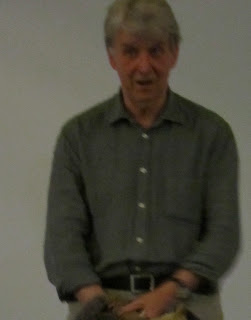 (It's really hard to take photos and make notes at the same time and listen, hence the fuzziness; Allan is not really fuzzy.)

He gave us the sort of talk he does in schools, complete with props: 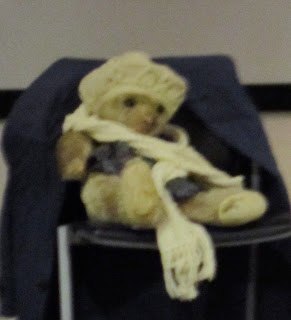 This one is Big Tom, who was quickly snaffled by Jane Ray and Sarah Mackintyre and dressed for winter weather. He is writing a sort of autobiography of bits and pieces, poems and reminiscences, which I predict will be a big seller.

I know what it's like to Chair one of these conferences and Helena Pielichaty did a splendid job: 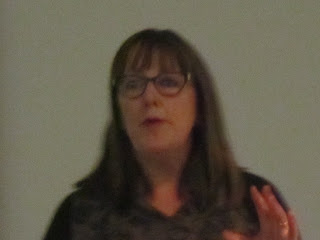 The reason that Helena looks fuzzy is that she didn't stay still long enough to me to get a better picture of her. Although it might be close to "write what you want," I think my favourite quotation from the weekend is Patrick Ness's: "I don't think you should give the reader what they want, I think you should make them want what you give them."

Surprised you got no comments saying nice broad independent view of a range of work. It is left to me, well done.