A happy ending and a new beginning 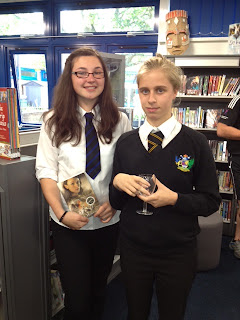 Just for once, I have a really lovely story to tell you about a library. Above, you see Eleanor Wheeler (nearly 16) and Amy Thomson (14), who are just two of the students at my local Secondary school who now have a library.

But to impress you with just how unusual this is, I need to take you back in time to January 2011. There was a meeting in Oxford Town Hall to gather support for defending Oxfordshire libraries against savage cuts proposed by Council Leader Keith Mitchell*. I was there and heard Philip Pullman give this rousing speech. Afterwards, in a  contribution from the floor, I mentioned that I had recently had a run-in with Mr Mitchell on Radio Oxford, because in his ignorance he had said that "all secondary school in the county have a library," which members of the public might use.

Now, I knew that my local Secondary school, Carterton Community College, had dispensed with its library and replaced the books with IT equipment so I wasn't going to let him get away with that. I mentioned this story at Oxford Town Hall and was approached afterwards by Rosemary Stables, the Head of English at CCC, who told me the wonderful news that under a new Headteacher, there was to be a new library there and she would be the Librarian.

On Monday I attended the opening of the excellent new library designed with the full involvement of students, and met Eleanor and Amy, both very keen readers. Headteacher Niall McWilliams said it was "the most important room in the school." And it was declared officially open by Professor Sir Tim Brighouse, who regularly ferries his grandson to the school from Oxford.

I looked round the bright and cheerful room, with its French windows opening on to a little patio garden, its cosy chairs, its stacking modular tables and its colour scheme (chosen by students) of purple white and green (shades of the Suffragists!). I looked at the well-stocked shelves of fiction and non-fiction. And I thought what a long way away it was from that dreadful time a few years ago when staff clambered into skips to save damp books.

So well done Carterton Community College, Niall McWilliams and his staff, especially Rosemary Stables, and well done all the parents and authors who have fund-raised or donated books. It all goes to show that stupid decisions can be reversed when there is a will to do so. I hope to be be visiting that library often. 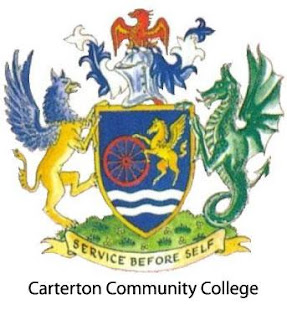 * Keith Mitchell has since stood down as Leader of Oxfordshire Council.

Such a wonderful story! Well done to the pupils, staff and headteacher at Carterton.