On Saturday I saw a play at the National Theatre, unlike anything I have seen staged before. It was London Road, a piece of "verbatim theatre" by Alecky Blythe, with music by Adam Cork. Our visit was organised by our theatre producer daughter, who had seen London Road at the Cottesloe last year and was keen to let everyone know about its revival at the Olivier.

But a musical based on the murders of five prostitutes in Ipswich a few years ago would not have been something I was naturally attracted to. And how wrong I would have been to let the subject matter put me off.

For a start, it's not "about" the murders that Steve Wright was convicted of committing. It's about the reactions of local Ipswich inhabitants to those murders or rather to everything that came in the wake of those murders: invasions by news teams and tabloid journalists, police tape cordons, suspicions of every man in the street. 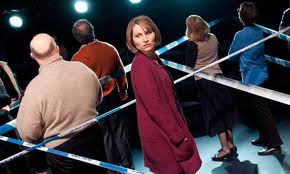 So the London Road Neighbourhood Watch is formed to re-establish some kind of normality, which they do through Quiz nights and a London Road in Bloom competition, won every year by the same person. The play begins with their AGM and immediately we are in a world familiar to anyone who has ever organised a protest, tried to save a library or whatever.

So although most members of the audience would have been untouched by murder, there is something much more common to relate to. The words spoken by the very versatile group of eleven actors are all taken from interviews taped by the writer (that's where the "verbatim" comes from.) And the music - with strong touches of John Adams - takes its shape from the words, leading to fugues, ensembles and haunting motifs.

Kate Fleetwood, who was Lady to Patrick Stewart's Macbeth recently, is now Julie, the dowdy committee secretary, in a long cardigan, organising the multiple flower baskets that have burgeoned to sweeten the atmosphere of the road. "Petunias, begonias and ....impatience [sic]" she sings. 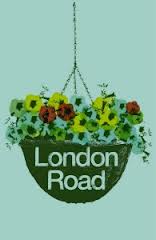 Rather touchingly, the residents of London Road don't know much about flowers, referring to "lily-type things" and Busy Lizzies as if they were different from Impatiens. And the monstrous prize-winning garden wheeled on at the end has grottoes, gnomes, a lighthouse, Jesus and the Virgin Mary!

We are a long way from naked strangled prostitutes by this point. But the neighbours have been haunted by the idea that the women could have been killed in Steve Wright's house - in "their" road. "He only lived here ten weeks - ten weeks!" Strangely this urgent question is never answered.

There was a period when their lives were all questions, every male a potential murderer. "You automatically think it could be him," is one particularly memorable refrain. This is suburbia trying hard to unthink the unthinkable, while speaking of the unspeakable.

'Any man has to, needs to, wants to/ Once in a lifetime, do a girl in," says Sweeney in T S Eliot's fragment Sweeney Agonistes, and you feel that demotic ghost hovering over the production.

I found it arresting, moving and fascinating but wouldn't have wanted it to go on a moment longer than its two hours, ten minutes (including interval). As with reading the virtuoso novels of Roddy Doyle, I felt  claustrophobically hemmed in by the predictable cliché-ridden language and thought patterns. No-one had an original idea or word.

In the most emotive scene, three surviving prostitutes sing about how they don't work the streets round London Road any more. But that is shutting the stable door after the horse has bolted, as I'm surprised someone didn't say.

And one resident really must have said to Alecky Blythe that they would shake the hand of the man that did it, because it had cleaned the girls off London Road.

Behind the lace curtains and the petunias some have hearts of gold, others of stone.
Posted by Mary Hoffman at 20:57

Alice has been recommending this - she's seen it twice now!