The Gambler and the Cross-dresser - Western Archetypes by Caroline Lawrence 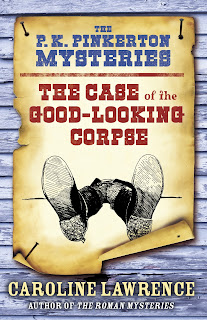 It's a great pleasure to welcome Caroline Lawrence back to the blog. I was writing about the impression her latest Western Mystery, The Case of the Good-looking Corpse, made on me just before I went off to Panama here.  Caroline now tells us more about what she thought were her original creations and how she found something similar when she delved deeper into her current research.

I’m currently writing about the ‘Wild West’ in Nevada in the 1860s and trying to put a new spin on some of the stock characters of the Western genre.

Just as Greek Mythology boasts archetypes such as the Hero, his Companions, the Quest and a Monster, the American myth called ‘The Western’ has its own stock characters: the mysterious loner, the crusty sidekick, the hooker with a heart of gold, the respectable lady from back east, the gentleman gambler, the alcoholic doctor, the naïvely eager farm boy, the faithful steed and many others.

I decided to play around with some of these archetypes, to mix and match and ‘modernize’ them a little. I made my hero, P.K. Pinkerton, a mysterious loner (so far so typical) but then added some wild cards to the mix. I made him a kid, placed him on the autism scale and even put him in drag, all of which are unusual for a Western.

Instead of giving P.K. a crusty side-kick, I decided to give him a gentleman gambler whose USP is that he is a master at reading body language.

I plucked these 'starter-kit' archetypes from a subconscious fed by a thousand westerns. But then last month I came across some short stories by American author Bret Harte and I realised that he might well have been the original source of many of these western characters.


Why had Harte not figured on my radar before? Possibly because he is neither in vogue nor esteemed. Mark Twain despised him, although they had once been friends and collaborators. Twain once remarked that, ‘Bret wrote in a dialect which no man on heaven and earth had ever used until Harte invented it. It died with Bret Harte but it was no loss.’

Missouri academic Dr. Clark Closser adds, ‘Nothing about Harte’s death was a loss.’

I don’t care what Twain or the modern critics say. I think Harte is great. I love his subtly ironic deadpan humour and his vivid, ornate descriptions. He was also a writer who knew how to structure a story and end it with a twist.

Born Francis Bret Harte in 1836, a year after Twain, he grew up in Albany, New York and published his first poem aged 11. He read voraciously, studied Greek and Latin, but like many men of that period, his formal schooling ended when he was 13. He moved to California aged 17 and worked there as a miner, teacher, messenger, and journalist before he found a market writing about life in the California gold fields.

In The Luck of Roaring Camp, first published in 1868, Hart tells how a baby born to the camp prostitute transforms a passel of rough Californian miners. The next year Harte ‘struck pay dirt’ with The Outcasts of Poker Flat. In this tale the suave gambler Jack Oakhurst is asked to leave town after relieving its citizens of quantities of cash. The town drunk and a couple of prostitutes are exiled along with him. On their way to a more accommodating place they are joined by a young couple. However, the little group makes the mistake of camping in a mountain pass. When the town drunk absconds with their pack animals and snow begins to fall, disaster ensues.

The gentleman gambler Jack Oakhurst gets a brief mention in Luck and dies at the end of Outcasts, but he was obviously such a popular character that Harte felt obliged to resurrect him. Harte gives him some backstory in offerings like A Passage in the Life of Mr. John Oakhurst and creates his virtual clone in Jack Hamlin, from Brown of Calaveras.

Harte’s gentleman gambler is so much like one of my characters that I wondered if I subconsciously stole him. He wears black and rarely drinks. He is admired by men and desired by women. He is described as pale, dark-eyed, handsome, calm, contained, chivalrous, polite and – surprisingly – honest.

‘But isn’t he a gambler?’ queried the youngest Miss Smith. ‘He is,’ replied Hamilton; ‘but I wish, my dear young lady, that we all played as open and honest a game as our friend yonder, and were as willing as he is to abide by its fortunes.’ (A Passage in the Life of Mr. John Oakhurst)


My gambler, Poker Face Jace, is also pale, dark-eyed, handsome, calm, contained, chivalrous, polite and honest. He dresses all in black and does not drink. I conceived Jace as a combination of Lee Van Cleef and ex-FBI body-language expert Joe Navarro, but he slips right into the mold.

Harte’s charming gentleman gambler never marries or has children, but we see his metaphoric children in Doc Holliday, the Sundance Kid, Maverick and many others.

Cool under pressure and mysterious, he might even be the grandfather of Clint Eastwood’s favourite characters: the Man with No Name from the Dollars Trilogy, the Stranger from High Plains Drifter and The Preacher from Pale Rider.

Another character I was thrilled to find in Bret Harte’s deck of cards was the cross-dresser, in this case a girl disguised as a boy. In The Poet of Sierra Flat there are two of them and they make a nicely contrasting pair. Milton Chubbuck is the eponymous poet, a strange, moist-eyed prospector who turns out to be a woman. The other cross-dresser is the California Pet, an androgynous music-hall star, whose ‘personation of boy characters’ and dancing of the ‘champion jig’ is hugely popular with the miners. In a cheekily risqué but understated ending, Milt and the California Pet end up going off together.

Whereas the charming gambler is a popular western archetype, there aren’t many cross-dressers in this genre. Ironically, as the recent book Re-dressing America’s Frontier Past has shown, there were probably more women-dressed-as-men than there were gentleman gamblers. 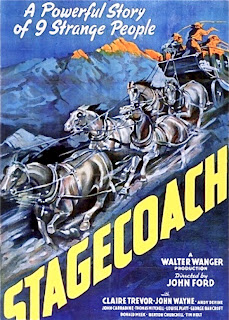 One clear example of Harte’s influence is the 1939 film Stagecoach by John Ford. Although the story on which the film was based has one or two parallels with a short story Butterball by Guy De Maupassant, it must also have been influenced by Bret Harte’s Outcasts of Poker Flat, which Ford had filmed twenty years before. The film begins with a handful of ‘outcasts’ forced out of town by the women’s temperance society. As the hooker with the heart of gold remarks, ‘There are some things worse than Apaches.’ Also leaving town is an elegant southern gambler called Hatfield, a whisky-loving doctor and an unjustly outlawed loner played by John Wayne in his breakout role after nearly 70 films. All of these archetypes can be found in Harte’s Western short stories.

What Harte has done should not be dismissed. He has created some marvellous characters that do what archetypes should do; they stand for an immediately recognizable class of person. It is then up to the storyteller to add nuances, quirks and eccentricities in order to bring them alive. Some academics have scathingly dismissed Harte’s characters as ‘stock’. But are they ‘stock’ if you are the first to create them?

As an American, Western Mythology is in my DNA. But I have only just realised that its Prometheus – the man who first gave shape to many of its best characters – was a writer named Bret Harte.
Posted by Mary Hoffman at 01:01

Wonderful article, thank you so much. I'd never heard of Bret Harte but his influence is fascinating. It always struck me how Stagecoach is much more a human drama/comedy of manners than just a 'cowboy' film - like all John Ford's Westerns, which is why they are so great (plus the brilliant camera work).

Hard to believe John Wayne have played in so many films before 'Stagecoach' - he looks so young in it (and handsome...!)