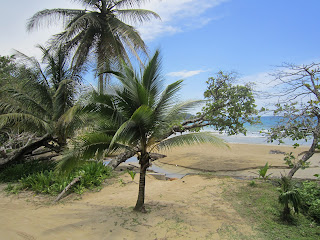 This ridiculously picture-postcard shot was one I took on Red Frog Beach on the island of Bastimentos in Panama (the Caribbean side). We are just back from two weeks with our youngest daughter and her partner on the boat they bought to sail round the world in.

It has been a bit of a shock to move from a tropical climate - very hot and humid - to a British July! We have been eating giant papayas and pineapples and picking coconuts up for free on the beach. The papayas in Waitrose looked stunted and shrivelled by comparison. And watching pelicans, frigate birds and eagles is much more fun than scooping up the dead sparrow one of the cats brought in within hours of their return from the cattery.

We worked out that our journey between daughter's boat and home had ten legs - ten different vehicles: dinghy, larger boat, shuttle bus to Panamian border, second shuttle to San José, taxi to airport, plane to Miami, plane to Heathrow, Piccadilly line tube, car to pick us up at Tube station and my car to drive home in.

The driver between San José and the border - both ways - was the delightfully-named Jacinto (pronounced Hassinto, because Latin American Spanish speakers don't lisp on the "c" like Catalans). He also had the nickname of El Pantera, the panther, but was a pussycat really.

That Panamanian border crossing was quite something. It took an hour in both directions to do the formalities, fill up forms, pay money, get stamped ... And then a walk over a VERY rickety wooden bridge. On the way back we were caught in the mother of all tropical rainstorms and were quite drenched by the time we climbed into Jacinto's minibus.

Very tired now (did I say 4 different time zones were involved?) but it was a lovely holiday. Swimming in the Caribbean sea was lovely, as was seeing our daughter after eight months. Next June, I wonder where she and we will be?

Meanwhile, here is a sunset in Bocas del Toro for you: 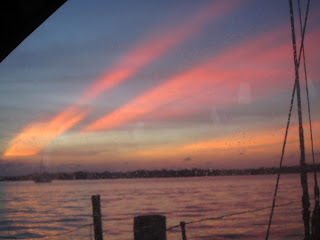 No literary news in this post; maybe I'll just become a picture postcard maker?
Posted by Mary Hoffman at 21:30

Well, it's a hard row to hoe but someone's got to go to the Caribbean, right, and tell us about it? And show us lovely pictures. What a fabulous time you must have had....you will need a good rest, though not quite sure when that will happen!

I'm sure we all feel very envious, but you deserve it. Wish I was there! - The rain being warm is a completely different experience. And ah! The smell of the rainforest... and the frogs...
It always takes me 10 days to get over the jetlag, so best of luck!
Sue Limb

Thanks, Sue and Adèle! As the latter knows, because she's doing it as well, I have to travel to Manchester tomorrow for the Children's Literature Festival. And a Scattered Authors retreat next week.

Sue - I had lunch with Sally Bradshaw 3 weeks ago and we talked about you - she told me about Gloomsbury!