Margaret Mahy - the right to be murderous


Five days after her death, there can be only one subject for this week's blogpost: the great and irreplaceable Margaret Mahy. I was away from home when I heard, having had no idea she was seriously ill, and it hit me hard, as it will every reader of this remarkably versatile and inventive writer's work.

I was lucky enough to have known her a bit, ever since I first interviewed her for School Librarian in 1986. We talked for hours on that occasion - about books (the ones we read and the ones we wrote), families (sisters in particular) and about finding the fabulous in the ordinary. She was already my role-model and hero because, as I did then and went on to do even more, she wrote picturebooks, junior fiction and stand-alone teenage novels.

I read the picturebooks to my daughters: The Man Whose Mother was a Pirate, The Lion in the Meadow and the immensely prescient Jam. When we moved to Oxfordshire, I too acquired a plum tree that was overly abundant and that bullied me into making many pots of jam - though, unlike the family in the story, we didn't quite use it for sticking back bathroom tiles.

Pirates were a recurring theme in Margaret's younger books. She told me she had adored a comic called The Adventures of Middy Malone, as a child, and was fascinated by the idea of women pirates and outlaws. 'I became very thrilled with the idea that women could have the power of life and death and the right to be murderous,' she told me.

But in the 80s, it was her distinctive teenage fiction that brought her new renown. The Haunting (1982) won her first Carnegie Medal, followed by The Changeover, which performed the same feat two years later and is to my mind, the better book. Indeed it is my favourite Mahy novel. 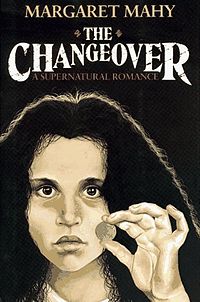 Laura Chant, aged fourteen, has to make the "changeover" into being a witch in order to save her  brother Jacko from the marvellously-named demon, Carmody Braque, who is sucking the life out of the little boy. Laura makes this transformation with the help of an older boy at her school, Sorenson Carlisle. "Sorry" as he is known, is a witch from a line of witches, and as sexy as hell. But this is an adventure story, not a romance, and the characters' attraction to each other just a background for the sacrifice Laura must perform to rescue Jacko.

This book was followed by The Catalogue of the Universe (1985), The Tricksters and Aliens in the Family (both 1986), Memory (1987) - a remarkably rich run of fiction, which never dried up, even if the later novels never again quite reached the heights of her work in the 80s.

I met her several times in the 90s and she was always so generous to me, asking me to sign my books for her, as she did mine. 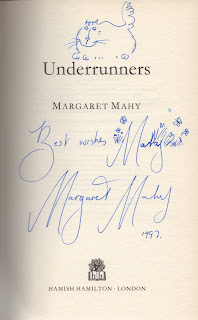 I'm sure I was not the only younger writer to feel her encouragement and warmth: "we're able to indulge in a bit of mutual admiration." When I started a campaign to support School Librarians (CENTRAL), Margaret kindly became its patron. She was a librarian herself and one can only envy the many children who experienced her whacky readings, as often as not dressed as a pirate in green or purple curly wig. She did a great deal to discourage the myth of the "lady librarian" as an uptight spinster and I dedicated my novel Special Powers to her, which featured two very attractive librarians my heroine had a crush on, one male, one female.

Margaret was a wonderful correspondent whether by email or letter in her spidery green handwriting, "which always looks to me a bit more sincere than print." She liked to be kept in touch with what she called "the wider world of books."

And she was the most amusing and stimulating companion, able to wow a room with her rendition of Monty Python's The Philosphers' Song, as she did at the Libraray Association the last time we met - the one that ends:
"Yes, Socrates, himself, is particularly missed;
A lovely little thinker but a bugger when he's pissed!"

You will be most particularly missed, Margaret. But if there is an afterlife, it will be a much more interesting and jolly place with you in it.

I saw that Margaret had died and knew that the name rang a bell. Now I know why; I loved The Changeover when I was a teenager.

This is a lovely blog post, Mary. I think I'm going to find The Changeover and revisit it.

Oh, this is so sad. I brought my children up on Margaret Mahy's books and we loved every one. Particular favourites were The Three Legged Cat and A Busy Day for a Good Grandmother - but anything with her name on the cover was a treat to read. Later on, we discovered the non-picture books. The audio of The Pirate Uncle kept us sane on many a car journey.

And, of course, she lived "just across the pond" from us in Downunder so we tried to pretend we owned her.
I loved the zany pace in "The Haunting"!

She was a wonderful writer, I've always loved and looked out for her books. How lucky you were to meet her, Mary!

What a wonderful tribute. Thank you so much for posting this, Mary. 'The Haunting' & 'The Changeover' are 2 of my absolute favourite books, but I'm ashamed to say I've never read her picture books - I shall now!

Lovely post, Mary - makes me want to start re-reading. And what a great signature!