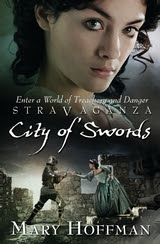 Last week the sixth volume of my fantasy sequence for Bloomsbury, Stravaganza, was published. It's the last, at least for now and since the sequence was originally planned as a trilogy, that's not bad going!

In each book there is a twenty-first teenager from our world who time travels to a version of Italy in the sixteenth century. Talia is in a parallel dimension, where in the period when history and myth are hardly distinguished, Remus won the fight against Romulus and everything has been changed by "going down the other trouser-leg of time" as Terry Pratchett has it.

The City of Swords is Fortezza - loosely based on Lucca - and at the beginning of the Talian part of the story, its ruler, Prince Jacopo di Chimici, is dying. He is one the "good" de Chimici, that powerful family that tries to rule all Talia in the face of opposition from some independent city-states. For readers of the earlier books, Jacopo was a tower of strength after the wedding massacre in City of Flowers.

Laura is the new Stravagante from our world and she has a secret - one we don't learn till the end of the book. In this she is like the other Islington teenagers attending Barnsbury Comprehensive who have travelled to Talia. Each has been unhappy for a different reason and Laura's unhappiness has led her into being a self-harmer.

It was a subject I wanted to write about because it affects a terrifyingly large number of British teenagers. But within the context set up by these books it becomes just one of many plot strands. Laura travels to Fortezza, which is - ironically - the city of swords and finds herself in a swordsmith's shop. Her Talian Stravagante is Fabio,  a swordsmith, and she soon finds herself caught up in a siege, surrounded by weapons that can do more damage than a razor blade.

Laura's talisman is a paper knife in the shape of a sword but unlike most paper knives it has a wickedly sharp blade. All the Stravaganti have talismans; they are what takes them from one world to another. But there is a story behind this one, which I have told before. These are the first five, some of them found after writing the books. 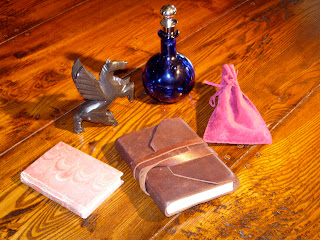 With City of Swords, I had a mental image of the paper knife and searched shops and stalls in Italy trying to find something that matched up to that image, with no success. And then in spring last year, when I had started writing the book, my sister came for Easter and casually said she's brought me something that had belonged to our mother because she had her own version, just the same. They came from Spain, but when I unwrapped it, there was my talisman! 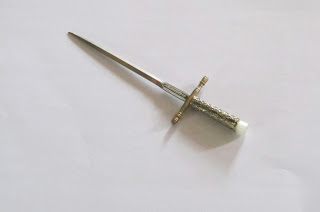 Laura's is silver rather than this sort of dull gold but otherwise, it's exactly as I imagined it and it made me very happy to have it. I'm not superstitious but I do like to have an object about me that is linked to whatever book I am writing at the time and this gave a special impetus to Swords, which had to be handed in by the end of July - by28th in fact, as I left for a much-needed week's holiday the next day.

By then I had already passed a happy week in Lucca, refreshing my memories of the city and this time I walked the whole circuit of the complete medieval walls that encircle it. It took only an hour and a quarter - much less than my usual walks - and we also spent some time under the walls in the cavernous passages and tunnels that resurface as dungeons in the novel.

I shall miss being in Talia because it;'s a world I know so very well that I can just immerse myself in it every time there's a new book. The Italians have a good word for "goodbye." Arrivederci means "till we see each other again." That seems a good way to part.
Posted by Mary Hoffman at 11:50

I have immensely enjoyed the entire Stravaganza series. Your knowledge of Italian/Talian history is quite incredible. I read City of Swords at the same time as I read David, (as it arrived just after I had started David) and found myself sometimes being confused whether I was reading about Itlian or Talian history! I do understand that you feel that 6 books is pretty good going for what was originally going to be a trilogy, and also that there would end up being too many characters, but I would love you to go on writing one Stravaganza book a year. In any case, thank you very much for the immense pleasure you have given me, as well as obviously thousands
of others.

THANK YOU
for what has been a great series of remarkably characters and themes.
i do wish though that maybe you could just give us one more. The way city of swords ends is one of the best cliff hangers i have read in a long time
thank you again

Thank you both! I will try to put this as delicately as I can: I have proposed six more books and will do my best to write them one day but you must understand I need something to live on while I write, so if the publishers are not keen, I can't do it till I find another way.

I have loved these books since I picked the first one up 10 years ago and fell into the amazing but sad story of Lucien.
I've read each one as it came out, though this year I have had to go back and re-read them all to remember all the storylines and characters. Ten years is a long time. Lucien's story was always my favourite, and the impact of his death in the real world never fades.
I would love to see the next six books written. An amazing series that my whole family reads. There is already a fight breaking out over who reads Swords next.
(But please can we go back to the beautiful original covers)

I myself am a big fan of fantasy books. As a 21 year old adult, some people think it's pretty weird that I'm reading children's fantasy books. But when trying to explain why, I always tell them about Stravaganza.

You've created an adventure, one that will stay with so many people forever. Stravanza is more then a book, it's a feeling. One that must be cherished and be kept alive.

I will patiently wait for the next 6 books. Hoping that they will come someday. Until that time, I will keep reading the first 6 books over and over.

Thank you Mary. Thanks alot.
(NL)

Thank you Zoe and Julien. The decision about covers was also not mine. In the Netherlands where Julien lives, there are matching hardback covers on the second trilogy and I am told the Dutch translation of Swords will be out in January.

Congratulations, Mary! Having just watched your great trailer for City of Swords, I am inspired to read these books all over again!

And I agree... the original covers were beautiful and inspiring - why did they change them?

These books were great!! I REALLY enjoyed the "on the egde of your seat" feeling that I had while reading them. I was introduced to these books by my cousins. At first, I thought they looked pretty boring, the the story, the characters, the romance, and the revenge kept me reading. The story of Lucien made me sad, but also happy when he revisits his mother was the most depressed by his death. I do hope that you will create more books for this series. (Don't rush! I will be as patient as I can!) I look forward to reading more of your other books!
Thanks for the thrills and excitment you have given me through your books!

Hellow!
I amyour Biiiiiiiiiiig!!!! fan!! <3<3<3 I have read your books olredy 5 times! :D I like isabel meybe the most ;) And Laura too! And ofcors the aderwans too. I love to read. And I have read many books. :) I am 12 jears old and I have read too boks for adolts ;) But the Stravagets books are my faforite books. And I hope that theyr gone com more of them! I am sory my bad english bicos I am from finland :)
-Noore <3