Writers are not very nice people

I found myself writing a version of this sentence in the adult novel I have been revising. It is about a first-time writer, though not a novelist, and she realises the above when she starts viewing some of her new friends as copy.

It is nothing new - as old as storytelling itself, I suspect. Even when in the throes of grief or bliss, the writer has a little exterior brain with a bird's-eye view of every incident and character. But woe betide anyone else doing it to us! 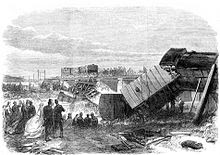 Charles Dickens was in the Staplehurst train crash in 1865. He tended the injured and dying, having been in the only carriage not to come off the rails. But he avoided giving evidence at the inquest, because he had been travelling with his mistress and her mother and did not want that fact to emerge.

Later he used the experience of the crash in a short story, The Signal Man. That 'mini-me' was on duty even when he had been giving sips of brandy to someone dying. I would be the same. It doesn't mean you can't be caring and kind; it just means you are aware of yourself being it.

Dickens ofter put versions of people he knew into his books. Mr Micawber was based on his father; Mrs Nickleby on his mother. But Elizabeth Dickens apparently did not recognise the portrait.


This famous painting, Dickens' Dream, executed five years after the writer's death, shows him in a reverie, surrounded by some of his most famous creations. For creations are what they are, not copies of real life people he knew, however much "inspired" by them they might have been.

It simply isn't possible to transfer real life events and people to the page, which is what I always answer to the inevitable question "do you put any of your family into your books?" Even if you started out with that intention, if the character is to come to life, it will grow and twist out of your grasp in unpredicted ways. And situations must be warped to fit the context of your story, even if it is the story of your own life.

There is another thing we do: we look at places to see if a visit to them can be made tax deductible by virtue of what we find there and can put into a book.

So watch this space for a story about sloths and red poison frogs, sea-turtles and margays. I'll be back in July.

You're a nice person as well as a writer!

Some of our experiences take a lot of settling before they are ready to be reworked, though - emotion recollected in tranquility, 'n' all that. Not sure it needs tranquility, but not the white hot passion of anger/grief/love whatever.

Have a great time with the sloths, poison frogs and margays. Guess I'll just be writing about waitrose, then...