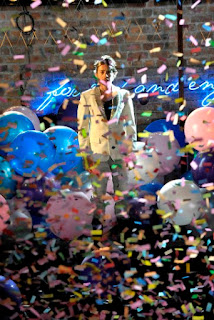 King John is one of Shakespeare's lesser known plays and hardly ever performed. So, being big WS fans here and going to lots of the plays at Stratford, which is an hour's drive from where we live, we booked tickets ages ago.

Is it a History, a Tragedy? Well, according to the RSC's latest production at the Swan theatre, it is a Musical Comedy. (This is the Coronation scene that opens the second half - to the left. Indeed it is John's second coronation, showing how shaky he knew his claim to the throne was).

The play is a great piece of Tudor propaganda, with a scene in which John defies the Papal legate and is very rude about the Pope, declaring himself head of England's church. Pretty anachronistic for around 1200, don't you think? But Henry the Eighth's daughter was on the throne at time and the play was apparently more popular in its time than now, precisely because it showed the King of England standing up to the Pope in Rome.

Another echo can be found in John's (a Bad King, if you remember your Sellars and Yeatman) plan to murder the son of his older brother, which can't help but recall Richard the Third and his alleged murder of his nephews, the young Princes in the Tower - that last monstrous straw which made the reign of Richard Crookback unacceptable and encouraged the young Earl of Richmond to make his push and kill the King at Bosworth Field. The victorious Richmond became Henry the Seventh, Queen Elizabeth's grandfather.

It's not a great play and I doubt very much the new dating of it to 1596, which would make it fall between Richard the Second and The Merchant of Venice. The part of Constance, little Prince Arthur's mother seems an obvious dry run for Margaret of Anjou in the Henry the Sixth plays. (Constance was admirably played by Susie Trayling at Stratford).

And then we come to The Bastard. "He" is the older son of Sir Robert Faulconbridge (deceased) who comes before the king to have the question of inheritance settled, since "his" younger brother is claiming their father's lands, through the terms of the father's Will. But the Bastard (clue is in the name) is well-known to be the illegitimate "son" of Richard the Lionheart, the king's older brother. And shows it in his features, as the shock of of the magnificent Siobhan Redmond, playing Elinor, the king's mother (Eleanor of Aquitaine), at seeing "him" is supposed to underline.

Why all the inverted commas? 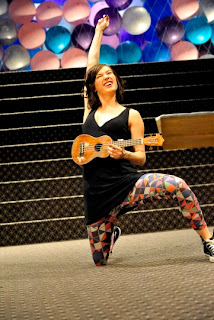 Because this (on the right) is how the RSC has chosen to cast the Bastard, the older son remember. Pippa Nixon. She opens the production, in her mini-dress and patterned tights, with this tiny guitar, plucking out the notes of Land and Hope and Glory and encouraging the audience to join in, saying she "didn't know the words."

"Kill me now," were the words on my mind. I don't blame Pippa Nixon, who made the best fist of the job she had been so inappropriately given. The Director, Maria Aberg, is responsible for this decision, which makes total nonsense of the inheritance scene. If the Bastard had been female, she would of course have had no claim to her father's lands even if she had been legitimate, at the beginning of the thirteenth century.

It also introduces an entirely spurious quasi-romance between the king and the Bastard (his nephew or even his niece, if you must), when she decides to forgo the disputed lands and throw in her lot as the enthusiastic follower of John.

Now, I'm sorry to harp on about history - and indeed Shakespeare allows himself plenty of anachronism in this play - but King John got his own crown by the Will of Richard the First, his brother, which leapfrogged the claims of young Arthur. In the play, King John finds in favour of the Bastard, flouting the terms of the older Faulconbridge's Will, while wearing the crown King Richard's Will had given him.

These subtleties are quite lost when the Bastard is played by a woman.

But this is not the only bright Directorial idea to cast its blighted shadow over the play. The Papal Legate (who really did excommunicate John in 1209) is played by Paola Dionisotti. She looks wonderful (sadly the RSC website offers only a tiny low-res picture) and acts most of the rest of the cast off the stage. But she is supposed to be a Cardinal, ffs. This is what the "dramaturg" Jeanie O'Hare says about casting a woman as a cardinal of the Church in Rome at the beginning of the thirteenth century: "Again we are bringing the spirit of the Church rather than the dry truth of the role onto [sic] the stage. This is not a political statement about women priests. This is a formidable intervention from someone who can destabilise this world of warring monarchs - and what better way to heighten the sense of Catholic impudence than by having a woman order these two kings around?"
(Essay in the programme).

This is worth quoting at length so that you can see how mind-boggling ignorant are the "ideas" behind this production. There was no "Catholic Church" in 1209. How can you "destabilise" two kings already at war? etc. etc. But this is presents itself as a lively modern interpretation of the play where to do what Shakespeare wrote becomes "dry truth." I really hope the new RSC supremo, Greg Doran, will stop this nonsense.

Of course lots of the audience enjoyed bopping to The Time of my Life and I say a Little Prayer for You, along with the cast. In another context, I might have enjoyed it myself.

Blanche, King John's niece by one of his sisters (another Eleanor) is married off to Louis, the Dauphin of France. And thus the king deflects the French king's support for Arthur's claim to the throne. The wedding of Blanche and Louis is given a full-blown "Hold it, Flash-Bang Wallop, What a Picture!" treatment, with balloons, cowboy hats, stripping, partyhats - the works. Blanche herself (Natalie Klamar) was played very much as Portia and Nerissa were in the "Las Vegas" production of The Merchant of Venice, as a peroxide blonde bimbo in a sticky-out Barbie dress.

But the Merchant of Venice is a popular play, frequently performed. One dud, redeemed by splendid performances by Patrick Stewart and Scott Handy, hardly matters. Who knows when there will be another King John?

I think one of the reasons it hasn't remained as a star of the Shakespeare repertoire is that it isn't really a full-blown tragedy. John has no apparent redeeming features and we don't care when he dies after being poisoned. Prince Arthur's death, which is shown as a suicide leap from castle walls, makes no sense. The Bastard's devotion to the venal king is inexplicable and there is no really great verse to carry it over these defects.

But, just because it's not on a par with Richard the Second - or even Henry the Sixth - is no reason to treat it in this charlatan fashion.

It sounds grim..what a shame!

Are you sure it wasn't better than staying at home doing proofs? What a disappointment - so sorry.

Ouch. And I hate singalongs!

I have to admit that I LOVED last season's 'Merchant of Venice', so I'm not completely adverse to unconventional productions of Shakespeare's plays - but this sounds like a hideous mess. I always book for RSC shows months in advance, so I've already exchanged my ticket for a credit note!

Patrick Stewart and Scott Handy were great but I hated the Texas game-show host versions of Portia and Nerissa! And the range of US accents from supposedly Las Vegas, to Texas, to Chicago, really grated.

I've just installed iStripper, so I can have the sexiest virtual strippers on my taskbar.