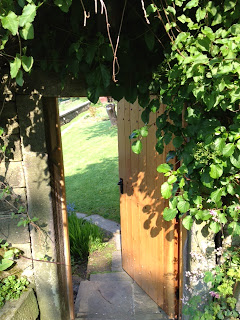 Isn't this a heavenly Secret Garden sort of image? I took it on my iPhone on Thursday morning, just before leaving Lumb Bank, near Hebden Bridge in Yorkshire.

I'd been up the night before to give the midweek talk on an Arvon Foundation course on Writing for Children. The tutors for the week were Julia Golding and Marcus Sedgwick, so the twelve participants had already had three days of first-rate advice and teaching from experienced and much published writers.

The Arvon Foundation has other centres, in Totleigh Barton in Devon, Moniack Mhor in Scotland, and the Hurst in Shropshire, all running courses on a similar pattern.

Lumb Bank used to belong to Poet Laureate Ted Hughes and in the 18th century was the home of a mill-owner. It still stands in 20 acres of woodland in countryside that falls and rises steeply. The house itself is sternly granite and made me think of Elizabeth's Gaskell's North and South.

But the tutors and midweek guest were housed in the "cottage" (itself a substantial three-bedroom building) on the hither side of this magical gate. Participants did their writing exercises on the vast dining table, which accommodated 15-16 people for dinner on Wednesday night with perfect ease.

Everything seemed on a gargantuan scale - fittingly for the home of the author of The Iron Man. My talk was on the upper floor of a separate barn, where I was facing a possibly eight-seater sofa!

I'd been asked to read from some of my books, answer questions and give an overview of my career. I had an hour to an hour and a half, about half of it set aside for questions. And I have written 96 books so it was a hard task to condense that down.

As I read a passage from Stravaganza: City of Masks in which the magician Rodolfo (he would describe himself as a scientist) sits hunched in a chair 'like a hawk roosting" I thought I felt the spirit of Ted Hughes just lightly pass.

Have you ever been on a creative writing course? And if so, how did you find it?

It looks lovely! What lucky students, to get you AND Marcus AND Julia.

I was lucky enough to receive a grant from Arvon a couple years ago and was able to attend a tutored retreat on Monaiack Mhor. Though it was not a specialised writing for children session I still had the most extraordinary experience and met some wonderful people there. I was able to complete the first draft of my PhD novel as I had the time to focus without any interruptions. The surroundings were amazing and we did have the most incredible weather. Our tutors were Kevin MacNeil and Zoe Strachan, both of whom I am still in contact with and they were, and are still, so supportive and encouraging. I took a huge amount away from that week.

I haven't visited Moniack Mhor, Vanessa, but if it's anything like Lumb Bank, I can quite imagine how valuable it was.

I once went as a teacher with a group of schoolchildren to Totleigh Barton. it was terrific - a marvellous week. I remember the tutors there said there was rumoured to be a ghost at Lumb Bank - presumably you didn't catch sight of one, Mary?

Hello Mary, I was one of the very lucky students on the course last week and just wanted to say thank you for your inspiring talk! I only wish we'd had more time to chat. It was a wonderful week and has been invaluable for my writing. Lumb Bank really is a special place, isn't it?

Coming in late to this discussion. I believe I heard a ghost walking up the stairs in the converted barn, where I was staying.

It was the early hours but I was still awake. I distinctly heard footsteps on the stairs on the other side of the wall next to my bed. Because Lumb Bank is out in the countryside, I wondered if it might be a vagrant sneaking in for shelter, so I got up to double check that my room was locked.

When I asked about it the next day, nobody could confirm or deny it was a ghost but there were some knowing looks from the centre directors.