The ?Joy of Writing 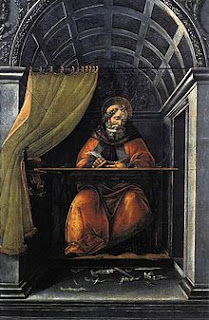 I have been spending a lot of time with other writers lately. First in Bologna then recently in London with three others that spanned three continents of origin. Another the next day, and next week will be full of them, at London Book Fair, at Tweet-ups and social meetings.

It is however unusual for us to talk about our own writing. Reading other people's, yes. But hardly ever do we talk about the process of our own fiction-making. Agents, editors, money, yes; creation, no.

However, recently I have and it was interesting to hear one person say how much (s)he hated the actual business of writing. It set me thinking. We all know that it can be difficult, that there are days when nothing comes right - or even comes at all.

We all know about the problems that the publishing industry is experiencing currently, and about Internet trolls giving our books horrible reviews on Amazon and elsewhere, sometimes in order to promote their own. We know about the brave Oscar-losers' face we sometimes have to adopt when we experience the opposite of Schadenfreude at our writer friends' successes.

But hating the act of writing itself? I had to think about that.

When it's going well, it's like nothing else in the world, except for ecstatic sex or maybe flying. (NB: Do not try this at home - it rarely happens this way). You have to believe that what you are writing is the best thing since Shakespeare, Dickens, Austen, Proust and Margaret Atwood all rolled into one. (And that's just the first page!).

But here's the mysterious thing. I have experienced writing on a roll and I have known days when it was like pulling teeth from an unanaesthetised crocodile, but how I feel while I'm doing it has no influence at all on how the sentence, the paragraph, the chapter, the whole book itself turns out - none at all!

Watching a writer at work is about as interesting as the traditional pastime of waiting while paint dries, which is presumably why Visconti chose to turn Thomas Mann's Gustav von Aschenbach from a writer into a composer when he made Death in Venice. It gave him a great soundtrack too; what would be the writer's equivalent of the Adagietto from Mahler's Fifth Symphony? From what Facebook tells me, more writers listen to Lady Gaga.

Still, the writer who was lamenting the pain of the job is a good one, whose end results are very satisfactory.  It's the process that is agony, not the end product.

So here's a question for those of you who write: is it pleasure or pain, agony or ecstasy?
Posted by Mary Hoffman at 19:11

I usually enjoy it ONCE I GET GOING but thinking about it is agony when the previous day's work has been unsatisfactory for some reason. Even if the actual writing is going badly, there's a certain satisfaction about just sitting there and pulling the sentences to pieces and reassembling them. Neither ecstasy nor agony most of the time but when it's going really well, I agree, it's fantastic.

I don't know how to answer this, I am a mess of contradictions. Lately I have been hating it being my job.
But as to the act, I used to love the first heady throes of starting something new, and the words used to pour out easily, but these days I far far prefer rewriting: coming up with creative, simple, elegant solutions to complex problems. The first draft I am writing at the moment is going sooo slowly, which makes me think there might be, um, something seriously wrong with it. But I am plugging on with it because I figure you can't edit a blank page.

I find writing really difficult for probably the first two thirds of a book. The first three to four chapters are especially hard, where you;re doing the set-up of world and characters... After that,a certain inevitability takes over, and towards the end I feel I'm tobogganing to the finish.

I love being a writer, I can't think of anything I'd rather do, but it can be excruciating. I'd love to the buoyancy of writing I had as a child or a teenager, but of course then I had no doubts and little craft. I agree with you that how we feel about it has little to do with how it turns out!

I love writing stories. I love thinking about them, and researching and discovering incredible things, and, once I've started writing I love getting into my character's heads and making them do what I want them to do.

But I hate writing non-fiction: blogs and features so on, and spend ages deciding on, dissecting and changing my mind about what I'm writing about. When the publicity department at my publishers asked me for twelve blogs to help publicise my last book I was horrified; give me a story to write any time.

It's pain all the way for me! Well, maybe there's a bit of joy in the first draft when the story is really flowing, but I know that at some stage I'll have to read what I wrote and then go through months of painful rewriting and editing to make it publishable... and even then the book is never quite what I imagined when I had the first flush of the idea!

Though on a positive note, this pain is probably why I keep writing... because I am still trying to write a book that everyone wants to read...

I like it most of the time. I don't think I'd do it if I found it painful. Everything about writing as a job is unsatisfactory - the money, the prospects, the frustrations but the writing itself is the good bit.

I hate it most of the time. Really hate it. Don't want to do it most of the time. Before I was published, I used to love it most of the time. I can't tell you what a relief it is to see other writers admit to disliking/hating it at least at times. I once blogged about this and felt quite guilty afterwards as all these comments came in about loving the process of writing. But, they were all unpublished writers, I think...

If I liked it more, I'd do more of it and I wouldn't be reading and commenting on blogs!

Like you, I love it when it's working. When it's not, it's endlessly frustrating. I don't quite agree with you that my feelings don't show in the end result. The writing that results from moments when I'm frustrated and struggling seem to come off as more belabored.

@Nicola - what you say has troubling implications! Your experiences would suggest that it is mainly unpublished writers who enjoy writing itself (and, perhaps, not very good ones) - while those who work hard enough to get good at it must sacrifice their own enjoyment of writing.
-
Speaking for myself, I think the writing part is the only part of being an author that I enjoy. Everything else is a chore or a stress, especially doing my tax return.