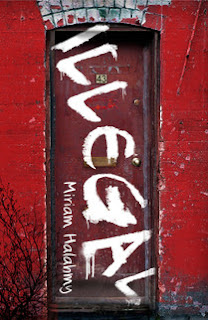 Miriam Halahmy has pulled off a difficult trick - a second novel as good as her first. Hidden dealt with tough topics like illegal immigration and Illegal is just as hard-hitting. But it takes a minor character from the first book and makes her the heroine of the second, an elegant device.

The three books set all or partly on Hayling Island form what Miriam Halahmy calls a "cycle" - definitely not a trilogy.

On the face of it, Lindy doesn't have much going for her. Her parents don't work, her two older brothers are in prison and Young Offenders' Institution respectively, her baby sister has died and her younger brother is neglected and needy. Then a cousin offers her easy work watering his plants for cash in hand. Only those plants are a cannabis farm and the cousin is a drug dealer.

Why would you want to read the book after such a synopsis? Well, perhaps because Hidden was a fine début, dealing with a difficult subject in a fresh and positive way. But I can promise if you do pick it up to read you will be totally hooked.

I read it in one long gulp - just over two hours - unable to stop. Yes, Lindy's situation is terrible and getting worse by the minute, since cousin Colin now has her delivering packets of cocaine. Her parents seem quite catatonic since the death of the baby and Lindy doesn't have proper food or clothes. She feels desperately trapped and doomed to follow her brothers into custody.

"That's the trouble with the Bellows family," says school bully Jess. "They're all brain dead."

But we know that Lindy has capabilities, as does her English teacher. It's just that, like so many children, she has had a rotten start in life.

There are two bright points though: first the devotion of her little brother Sean, who is asthmatic and a bit clingy but brings out all Lindy's good qualities of caring and nurturing. Then there is Karl, the elective mute, who is jeered at in school for being a "retard" but is actually intellectually gifted. He and Lindy form a cautious, jumpy alliance and he finds his voice when he sees her in a desperate situation.

This leads to a heart-thumping finale in which Lindy, Karl, Sean and unlikely ally Jess need to act together to thwart the drug dealers, Colin and his sinister tooled-up friend known as Elf because of his pointed ears. It could have been a bit Scooby-Do with a lesser hand guiding the story. But it all works.

And, as with Hidden, there is hope at the end. I imagine these titles are immensely popular with teen readers, because there is no gilding of the lily; Miriam Halahmy was a special needs teacher for many years in London and knows what she is talking about. I'll be looking forward to Stuffed, the third book in the cycle.
Posted by Mary Hoffman at 11:11

This sounds fascinating - it is also very difficult subject matter!I am looking forward to reading it.

What a sensitive and beautifully written review! I have read Illegal and it is every bit as good as you say.

Many thanks Mary for a lovely review and for your comments fold.